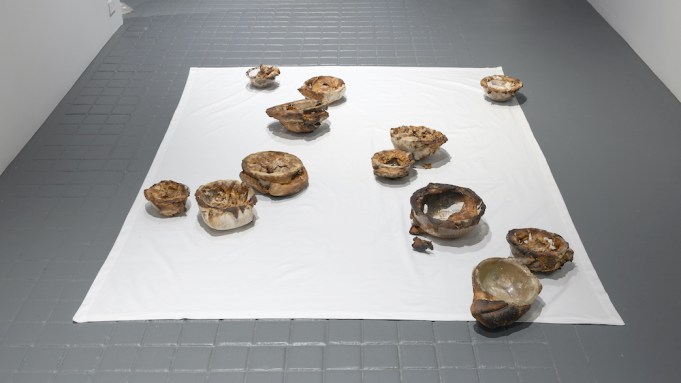 Though Rochelle Goldberg’s exhibition “Psychomachia” originally opened at Miguel Abreu in early March, before New York’s lockdown, the show revolved around what has since become the signature foodstuff of the COVID era: the sourdough loaf. The floor piece Picnic (2020) comprised twelve crumbling rounds of bread that were formed around glass bowls and studded with coins. Another such loaf rested on a low plinth in Great Gardener Makes (2020), surrounded by scattered crumbs. In Bread Garden (2020), hunks of bread were cast in aluminum and spread amid piles of tuna cans.

Goldberg is known for her inventive use of organic materials—ranging from snakeskin to wild lilies to felted tufts of human hair—employing them in ways that emphasize their particular behaviors and properties. Among her signature materials is chia, a plant species that propagates quickly and spreads across surfaces like grass, which she often uses to grow carpets that sprout and die over time. Other installations have incorporated pools of crude oil that emit harsh fumes as they evaporate. The peculiar array of sculptures and installations in “Psychomachia” were inspired by the story of the fifth-century saint Mary of Egypt, a prostitute and later Coptic penitent who self-exiled from Egypt to the desert, where she is said to have survived until her death on just three loaves of bread. (I was told by gallery staff that the artist’s dough recipe was the result of rigorous research into medieval breadmaking.) In these works, Goldberg directs her material fixations toward religious legend, using Mary’s miraculous ability to sustain her body amid the most inhospitable conditions to reflect on processes of growth, transformation, and decay. Sourdough, after all, is the product of a microbial magic trick—a kindly form of rot. Once it has been baked, it eventually hardens and molds, beginning a new process of mutation.

Memento Mori Can Be Fun

Mary’s effigy appeared in melancholy busts like Intralocutor: towards an attraction (2020), a fragmentary rendering of the saint’s head and emaciated torso cast in bronze and ornamented with glittery eyeshadow, and The Life and Death of Mary (2020), an alluring sequence of hazy monoprints lining one wall, illustrated her grim tale. While this obscure early Christian hagiography was likely unfamiliar to most viewers, Goldberg emphasizes the underlying relationship between bodily deterioration and sanctification, often expressed, in these works, as a tension between animate and inanimate. This comes across most clearly in sculptures in which the artist preserves ephemeral materials at particular stages in their life cycle, presenting them as symbols of both durability and change. In Soiled [Resurrected] (2017–2020), for instance, foam slabs crusted with gold foil, bronze powder, and chia are embalmed in shellac, so that the superfood seeds can no longer grow. The loaves in Picnic are the byproduct of sourdough starter, a culture that can live in perpetuity if fed—a process suspended once the bread is baked. Goldberg’s sculptures are neither fully alive, nor dead, simultaneously occupying logically conflicting metaphysical poles—in a sense, like Mary of Egypt, who persists on a spiritual plane despite the transience of her body. But the most affecting aspect of these works is the way that Goldberg makes materials like bread and chia seem mutable and unfamiliar, unexpectedly charged by history and myth.