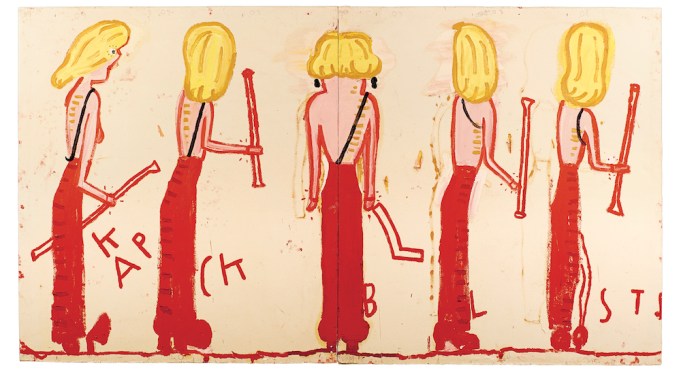 Beneath their beguiling picture-book appearance, British painter Rose Wylie’s works reveal her earnest and long-standing engagement with the craft of painting and its history. On her mostly large-scale, unprimed canvases, the artist, who was born in 1934 and was well into her seventies before she received critical recognition, lays bare her process in compositions featuring messy notes, blotches, and daubs of pigment, yet her multiple reworkings and glued-on patches with revisions give the lie to an impression of slapdashery. Her simplified forms share the visual economy and complexity of Philip Guston’s cartoonlike figures, for which she has voiced admiration. Often, she paints images from memory, drawing on sources that span films, news stories, advertising, sports, art history, and lived experience. In her current show at the Serpentine Sackler—which consists of twenty-seven paintings, most of them made in the past decade or so, many of them multi-panel, and some hung so as to stretch around corners of the galleries—soccer stars Wayne Rooney and Ronaldinho crop up, as do oversize animals and Hollywood celebrities.

Repetition is a favored technique through which Wylie explores movement and different facets of an image. Frequently, she uses cinematic devices, such as zooming in and out on her subjects. In two paintings from her ongoing “Film Notes”—a series of works centering on imagery and text filtered through the artist’s recollections of movies—she presents the same desert scene from Syriana (2005), showing it from close up in one and from a distance in the other. Her 2014 painting NK (Syracuse Line-up) displays a sequence of images depicting Nicole Kidman from the side and back in a long red gown, calling to mind the stop-motion photographs of Eadweard Muybridge, comic strips, and classical friezes.

Darker subjects are present alongside Wylie’s magpie-like pickings from popular culture. Two of the most arresting pieces derive from her childhood memories of World War II, during which she lived in London and then rural Kent. Rosemount (Coloured), 1999, portrays Wylie’s Kent house in silhouette to denote the wartime blackouts, with bombs falling on her garden and that of a neighbor. The top of the young Wylie’s head looms in the lower right corner, while an eye seemingly embedded in the grass observes a red German pilotless bomb (known as a doodlebug) passing above. Perspective veers from aerial to ground level and scale is distorted, the disorder conjuring the watchful child’s fraught anxiety and the drama of the scene. Wylie’s four-panel painting Park Dogs & Air Raid (2017) collides a moment in 1940 with one from today: German and British warplanes plunge and swoop in a dogfight overhead amid smoke and flashes of exploding shells, while, below, dogs and ducks promenade idly in Hyde Park, home to the Serpentine Sackler, which occupies the composition’s middle ground. Wylie views these two works, which she has scrawled with notes and descriptions as if to pin down her memories, both as diaries and as modern history paintings.

The latter painting belongs to a new park-themed series that Wylie began after encountering news reports of funding cuts to Britain’s public spaces. The works in this series tend to combine elements of joy and celebration (with their images of happy-seeming animals and lush greenery) and more ominous concerns. (Such a pairing is also conveyed by the exhibition’s title, “Quack Quack,” which is meant to allude not only to the sound of ducks but also to the “ack ack” of anti-aircraft artillery.) In the poignant canvas Park Bench (Migrant), 2017, a brown-skinned man sits with his arms folded, enveloped in foliage, staring warily ahead, as the unpleasant reality of xenophobia, given louder expression in the wake of Britain’s Brexit vote, casts its shadow over the verdant scene.

RS Recommends: This Smart Roomba Robot Vacuum With Over 13,500 Reviews Is $75 Off Online