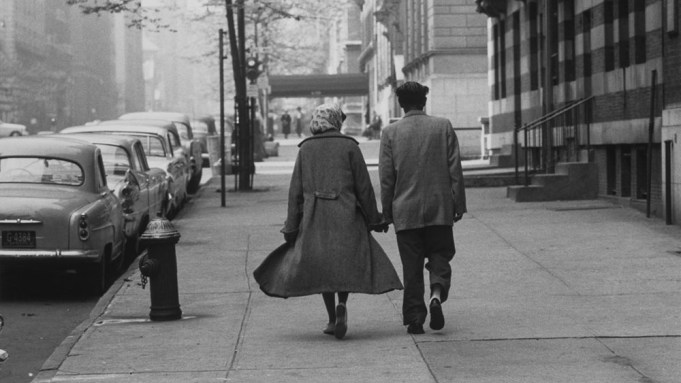 In the 1950s and ’60s, when he was already one of the most daring photographers in the United States, Roy DeCarava would complain that his critics expected him to be a documenter of black people in the most ploddingly literal sense. Four of his photographs appeared in “The Family of Man,” the Museum of Modern Art’s 1955 kitsch-classic exhibition that was seen by upward of nine million people by the time it finished touring the world, in 1963. All of DeCarava’s photographs in the show were close-ups of black people: two couples embracing, a bassist, and a man walking up subway stairs. All but the bassist were plainly lit. While the images were compelling, they did little to challenge the exhibition’s bland, chirpy humanism.

As his career progressed, DeCarava, who lived in New York and died in 2009, stripped more and more of the literal from his work. He continued to photograph black people, but the techniques he’d already begun to experiment with in the years prior to “The Family of Man” led him into lyrical, atmospheric territory in which subjects were abstracted from their environments, environments turned into shapes, and shapes softened—the artist, in short, developing a catalogue of the ways one could photograph blackness without merely documenting it.

For DeCarava, bold interpretations of blackness called for bold darkroom manipulations of the color black. He specialized in low-contrast images featuring lagoons of darkness accented by areas of light. This style was found throughout the smaller of David Zwirner’s two recent exhibitions of his work. All the photographs in the show, which was held in the gallery’s uptown space, appeared in the artist’s 1960 book the sound I saw, and most depicted jazz virtuosos. The prints were generously spaced on the walls, so that each was given the gravity of a complete, thriving world. Here were Duke Ellington, John Coltrane, Miles Davis, Count Basie, Lena Horne—the greatest musicians of their time, veiled in smoke or glittering through the shadows of a nightclub.

DeCarava’s aesthetic approach had its limitations. He shied away from psychology or specificity in his portraiture, leaning heavily on his favorite formal techniques. He was especially fond of shooting artists and musicians as expressionistic blurs, as if to suggest the shimmering heat of their creativity. The second Zwirner show had a number of portraits like this—so many, in fact, that the effect grew stale. DeCarava’s interpretation of Coltrane in 1963—brow creased in concentration, fingers dancing so fast they’re almost one with his instrument—is stunning on its own, but it looks a lot like his interpretations of Kenny Burrell in 1989 and Romare Bearden in 1951. His 1958 photograph of James Baldwin shrinks the author to a white blur on a black door, flanked by more blurs. The image is stylishly provocative, but the provocation seems oddly detached from its subject—why Baldwin?

Some of the most ravishing works in the exhibitions were still lifes, cityscapes, and landscapes, many of them taken in the winter of DeCarava’s life and graced with a sturdy, architectural beauty. The 2002 Hulls shows two immense ships moving tantalizingly, intimately close, as in a modern Creation of Adam. The blurs and shadows found in the earlier work are still present, but here they’re reinforced by strong lines and curves. When DeCarava included people in these kinds of compositions, he sometimes got to a deeper political truth than the documentary type his critics had demanded. Five Figures, Fences, taken in 1985, has the visionary intensity of a manifesto: its anonymous city dwellers, their smeared bodies appearing almost Giacometti-esque, hover halfway between being and not.