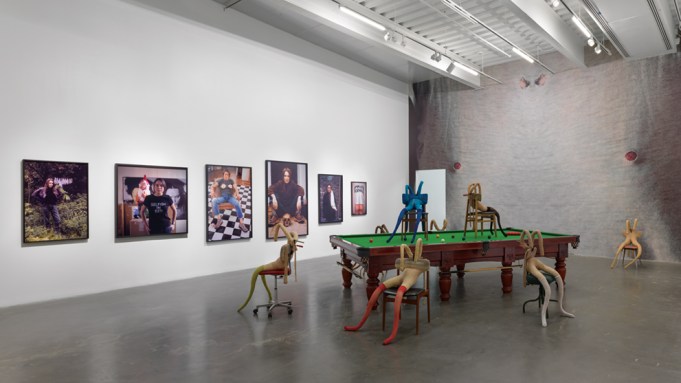 Over a third of the works in Sarah Lucas’s first stateside retrospective are from her early years as part of the Young British Artists (YBA) group, beginning with the sculpture Au Naturel (1994), from which the exhibition takes its title. The now infamous tableau made from found objects and perishable food was an early enactment of the kind of abject shorthand for body parts that has since defined her aesthetic. The work features a yellow-stained mattress sitting on the floor, slumped against the wall. Two melons positioned above a metal bucket and an upright cucumber stuck between a pair of oranges are set on top, completing the visual pun.

Yet perhaps because of the dubiousness of the YBA legacy thirty years on, the exhibition’s wall texts and catalogue essays downplay the association in favor of more gender-based readings that also sidestep the role of class intrinsic to much YBA work. A group of brash DIY-styled artists who came of age in a post-Thatcher world marred by economic recession, rancorous class divisions, and tabloid sensationalism, the YBAs were defined by their shared use of found objects, shock tactics, and mass media. Their interest in the base realities of sex, death, and materialism channeled a working-class cynicism toward high art that artists like Lucas expressed through crude humor and accessible metaphors.

Lucas, who grew up on a council estate, has herself inferred the connection between her British working-class background and her performance of a “masculine sense of humor,” speaking of the pleasure in “insinuating myself into blokiness” and declaring herself a “better bloke than most blokes.” Scattered throughout the three-floor, 150-work retrospective are many large-scale photographic “self-portraits” of the artist (which she had other people shoot) that play with the low-brow machismo she grew up with, if at times descending into the puerile terrain whence they came. Divine (1991/2018), for example, a mural-size photo of the young artist sitting on white concrete steps wearing a brown leather jacket, Doc Martens boots, a white T-shirt, and rolled-up jeans, her legs spread wide, feels less like a subversion of gender than like a parody of gender-nonconformance.

Of course, the most famous “bloke” of the YBAs is Damien Hirst, whose media-savvy career helped undercut the authenticity of the YBAs’ antiestablishment stance, as did the support of advertising mogul Charles Saatchi, who collected and exhibited their work almost from the start. One of his first purchases was Lucas’s Two Fried Eggs and a Kebab (1992), a sculpture—originally displayed in an abandoned storefront and on view in the current retrospective— comprising a nondescript wood table topped with an anatomically evocative combination of two fried eggs and a pita-wrapped pile of shredded lamb, as well as a photograph of the arrangement.

Lucas’s assemblies of quotidian materials—cigarettes, toilet bowls, eggs, helmets, chickens, containers of spam—can initially appear ad hoc, but soon reveal themselves to be carefully arranged. This is particularly the case with her trademark works featuring pantyhose stuffed with newspaper or kapok fluff to resemble legs, bunnies, cocks, breasts, and bodies. Several key works featuring these erotically charged figural assemblages are among the highlights of the show. Clamped to chairs in the installation “Bunny Gets Snookered” (1997), coiled into snakelike forms atop brick pedestals in the series “NUDS” (2009–), and sprouting from a hanging rattan chair in the sculpture Mumum (2012), the pieces have obsessively aligned seams, subtle tonal variations, and expressive tumescence that are rife with psychosexual connotations.

“Bunny Gets Snookered” features eight figures Lucas calls “Bunnies” sitting on chairs around and on top of the type of table used in snooker, a British billiards game. Each of the figures dons a pair of colored stockings to match one of the snooker balls. A series of large-scale black-and-white photographs of the Bunnies hangs on an adjacent wall. The perverse scene is redolent of Ed Kienholz’s Roxys (1960–61), a to-scale memorial to a brothel in which figural assemblages of limp, misshapen female bodies similarly sprawl across furniture, evoking postcoital tristesse. It’s notable that snooker is a traditionally male-dominated sport, making the absence of men here all the more significant.

If Lucas’s bawdy representations of cocks, which are well represented in the exhibition, have become the stuff of satire (“Tracey Ullman’s Show” did a sketch in which phalluses are the signature motif of a YBA-style artist), they also appear to be undergoing a transformation. While the YBA-era ones were comically formed from cucumbers, beer cans, matches, and neon tubing, subsequent versions appear more somber and artifactual, as in the cast-plaster examples seen in the series “Penetralia” (2008–10). In the show, a large grouping of “Penetralia” is arranged on a table like an assortment of relics dug up from a prehistoric site.

Two sculptures, Priapus and Eros (both 2013), comprise monumental concrete phalluses laid out like felled trees on plinths made of crushed cars, echoing this romantic notion of ruins. Evoking Stonehenge by way of Mad Max, these prone gods, symbolic of virile pleasure, seem robbed of their randy power. Presented in the final gallery—alongside This Jaguar’s Going to Heaven (2018), which consists of the titular car sawed in half, the front end covered in cigarettes, the back end burned out—the works leave us with a sense of doom, however satirical. While Lucas has never been one to offer direct meanings for her works, the allusion here to a played-out patriarchal order—to a civilization brought down by issues of class and gender, forces that have long shaped her work—seems clear.

Sporticast: The Big Ten Gets Bigger, Player Data Heats Up