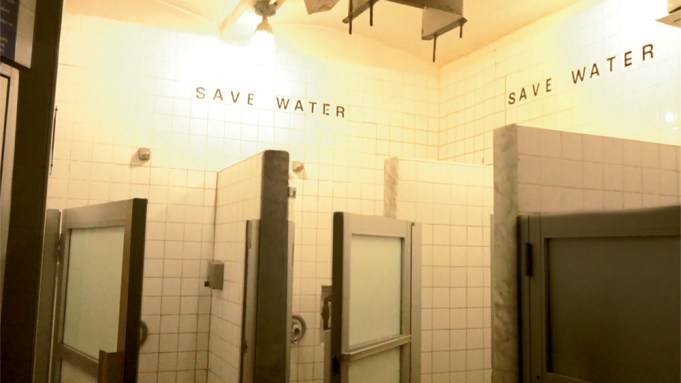 Savannah Knoop’s first solo exhibition centered on a video delving into the clientele of the East Tenth Street Russian and Turkish Baths, which the artist considers to be a kind of chosen community. Over the past four years, with an all-queer film crew, Knoop, who uses the pronoun “they,” shot and edited footage of regulars at the East Village spa, a motley group that includes Russian immigrants, mixed-martial-arts fighters, and avant-garde artists, among others. The resulting work, Screens: A Project About “Community” (2016–19), was housed in a wooden viewing booth at the back of the gallery. Based on the design of a sauna, the structure accommodated two people at a time.

The exhibition explored themes of social belonging and the negotiation of public identity, concerns that can be linked to a particular episode in the artist’s life. In the late ’90s, as an eighteen-year-old, Knoop became the face of J.T. LeRoy, an authorial persona invented by Knoop’s sister-in-law, Laura Albert. LeRoy’s novels, which supposedly described his life as a gender-fluid teenage prostitute, became cult favorites of New York intellectuals and Hollywood celebrities alike. Through letters and telephone calls, “LeRoy” befriended figures like Dennis Cooper, Winona Ryder, and Asia Argento, who directed a film based on one of LeRoy’s books. In 2005, LeRoy was exposed as Albert’s creation, and the friends of this fictional author suddenly vanished from Knoop’s life. In a 2008 memoir, Knoop describes feeling unmoored after LeRoy’s identity was unmasked: serving as his bodily avatar had allowed Knoop the freedom to experiment creatively and to play with gender identity. In the ensuing years, Knoop turned to fashion design and then to visual art, receiving an MFA in sculpture in 2016.

A vestige of old New York, the East Village spa is owned by two estranged Russian brothers who take turns operating it on alternating weeks. Having initially gone to the baths expecting a space of relaxation, Knoop soon realized that the regulars used the sauna as a site of release: a place to air out political, social, and possibly erotic tensions. The video depicts this bathhouse society through semi-staged and documentary footage. Some shots suggest particular sexual tastes, with the camera filming furtively from a drain in the floor, for instance, or aimed at a passageway through which someone slides a foot.

Knoop heightens the queer sensibility of the coed sauna by, for instance, focusing on same-sex pairs having intimate conversations and portraying male regulars carrying out campy performances of ballads and arias. In one scene, as a man off-camera complains about the city’s “liberal conventions,” the artist sits in a sauna and rubs their body with a giant newspaper, which quickly begins to disintegrate in the heat. Knoop later transformed this and other newspapers used as props in the video into two sculptures on view: Screen (Weaving I), 2018, which was affixed to the gallery’s front window, and Free Weaving the News (2018), which hung on a wall. To create these works, Knoop rolled the newspaper into cords, coated the cords in aqua resin and oil, and created circular and gridlike forms using weaving techniques demonstrated in online tutorials by Russian women. A third sculpture, Screen (Blocking I), 2018, composed of two-by-four segments painted in aquatic hues, was modeled on a room divider designed by the openly bisexual modernist architect Eileen Gray.

Knoop’s exhibition celebrated the baths as a model of community in which people who wouldn’t ordinarily cross paths come together, forming connections that are at once deeply intimate and fleeting. As the artist suggests, the social experience provided by the baths is all the more meaningful for its increasing rarity: at the start of the video, a muscular man at the center of a sea of bodies in the baths barks out in a gruff New York accent, “I want to take advantage of as much interaction . . . as is possible, before, inevitably, we turn into robots.”