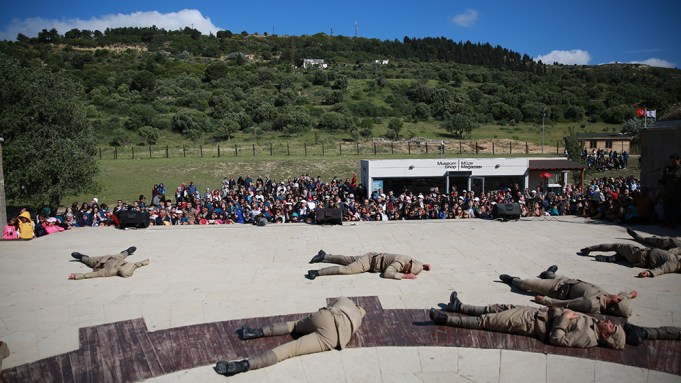 On April 25, 1915, around five hundred thousand soldiers from Britain, Australia, and New Zealand landed on Turkey’s Gallipoli peninsula, as part of a World War I naval campaign to capture the Ottoman capital of Constantinople (now Istanbul). Executing a plan devised by Winston Churchill, and aided by a fleet of destroyers, submarines, and the battleship HMS Queen Elizabeth, Allied forces fought Turks in a battle that lasted eight months, and caused 160,000 British Commonwealth casualties, 11,000 of whom were soldiers from the Australian and New Zealand Army Corps (ANZAC). The Ottoman army, under the leadership of Mustafa Kemal Atatürk—the future president of the Turkish Republic—suffered bigger losses (56,000 dead, 97,000 wounded, 11,000 missing), but managed to defend the Dardanelles, the gateway to Istanbul.

The Gallipoli campaign became a major touchstone for the formation of national identities on both sides. Turks considered their victory as proof of their unassailable character, and it played a significant role in the push for Turkish independence after the war. The battle was likewise viewed as the moment when Australia and New Zealand first understood themselves as having a national self-consciousness independent of the British Commonwealth—the “Anzac spirit,” which first revealed itself in Gallipoli.

In Heroes (2019), scholar and video artist Köken Ergun considers how Gallipoli still figures in these respective national identities a century later. Co-produced by the Australian War Memorial, Art Space Sydney, and Istanbul’s Protocinema, the film assays nationalism’s performative aesthetics, examining the responses from both sides of the conflict. It tracks tourists from Australia, New Zealand, and Turkey as they arrive in Gallipoli, hear tales of courage from a century ago, leave notes of gratitude to their dead, wander battlefields in awed grief, and take endless selfies.

Ergun has interrogated Turkish nationalism in past works with mixed results. In I, Soldier (2005), exhibited at Documenta 14, he surveyed the National Youth and Sports Day celebrations in an Istanbul stadium, a spectacle featuring soldiers reciting fiery poems, breaking wood planks with their feet, and waving Turkish flags from the tops of human towers. The Flag (2006) catalogued another stadium celebration, this one devoted to Children’s Day: in the film, child scouts, orchestra musicians, and spectators dully play their part in the ritual, manufacturing emotions for public consumption. In a 2017 interview, Ergun said he “exorcised” the trauma inflicted by the Turkish republican education system’s militaristic curriculum and ceremonies with these works, but I think there is something problematic in their structure: these early films relish the militaristic pomp they purport to scrutinize. For his project Tanklove (2008), Ergun took inspiration from a 1997 display of military might against Islamists by the Turkish Army in Sincan, Turkey—the spectacle heralded a military ultimatum issued the next month—staging a performance in which his camera confronts a tank as it moves down a bucolic road in Jyderup, Denmark. Residents watch as its pallets leave track marks on their streets. When it stops in a traffic light, the tank moves its barrel threateningly toward other vehicles. The film creates an ambiguous representation of militaristic power, perhaps even fetishizes it.

Heroes is a more mature work. In order to consider the touristification of Gallipoli, Ergun attended and filmed fifty guided tours over the mid-2010s. Some of them were municipally-sponsored trips that run, free of charge, from July to September each year:  these journeys begin at night on a tour bus from Istanbul to Gallipoli, offer breakfast and lunch, and conclude with a return trip back to Istanbul. Some tours, organized by companies in Australia and New Zealand, feature additional stops at Greek beaches to attract young backpackers. In the film, Ergun wanders in battlefields alongside various visitors: backpackers, the mother of a fallen soldier, sleepy kids watching the skyline, and spirited tour guides. He chats casually with a New Zealander who ponders the view of a steep trail passed a century ago by Anzac soldiers. She says she climbs the trail to “feel the pain they felt,” and uses the word “poetic” to describe the soldiers’ plight. The conversation unfolds organically, allowing Ergun to distill the New Zealander visitor’s discourse and chronicle her gestures as she puts herself in others’ shoes. Her personal testimony is treated as a stand-in for the group as a whole, soon adopting the tone of a public speech, a pattern that repeats in other interviews.

The film’s opening sequence begins with hundreds of Turkish boy scouts waking up at the crack of dawn for a Gallipoli anniversary march. Ergun captures them as they wash their feet to prepare for Islamic prayers at a local mosque, run in single file, and queue up to have henna applied to their hair to mimic Ottoman soldiers rushing to battle. (They even eat pea soup for breakfast, prepared in the way Ottoman soldiers had it a century ago.) Ergun’s camera moves invisibly among crowds of teenagers marching under banners that bear names of their hometowns. It is a sublimely uncanny sight.

According to the Anzac narrative, Gallipoli represents the heroism of the Anzac soldiers, who played a central role in a major military campaign for the first time, but also war’s cruelty—and the incompetence of British generals who organized the campaign. In Australia and New Zealand, Gallipoli is a source of both pride and anger. In the Turkish narrative, Gallipoli exemplifies the bravery of Ottoman ancestors, embodied by Corporal Seyit, a gunner in the Ottoman Army: as the British navy bombed Turkish fortifications, killing most of the Turkish soldiers and destroying their Krupp guns, Seyit managed to carry a heavy shell into a damaged cannon, hitting a British battleship when he fired. In a reenactment ceremony depicted in the film, a Seyit impersonator amuses viewers by carrying the replica of the huge cannon shell. Another episode from the same play, which is repeated four times every hour, features a distressed woman sending off her husband to war for the good of the nation, parting with him in tears.

These rituals possess an air of sanctity, paralleling a scene in Ergun’s best work to date, Ashura (2013), in which hundreds of men cry together on cue in the Istanbul neighborhood of Zeynebiye, as part of a Shi’ite ritual during Ashura, the Muslim holiday commemorating the slaying of the prophet Muhammad’s grandson Imam Hussein. In both Ashura and Heroes, Ergun portrays rituals of staged suffering and patriotic commemoration as equally fascinating and unnerving, approaching believers with both curiosity and skepticism.

Toward the end of Heroes, Ergun films Turkish tourists lining up to take pictures next to Seyit’s famous cannon. A middle-aged woman almost falls down while trying to find a good spot for a selfie with this legendary weapon. This moment of comic relief is also an effective diagnosis, capturing the aesthetics of curated nationalism and performed beliefs.

A Look at Blackpink’s Best Style Moments Through the Years

RS Recommends: The Best Men’s Dress Pants for Every Occasion