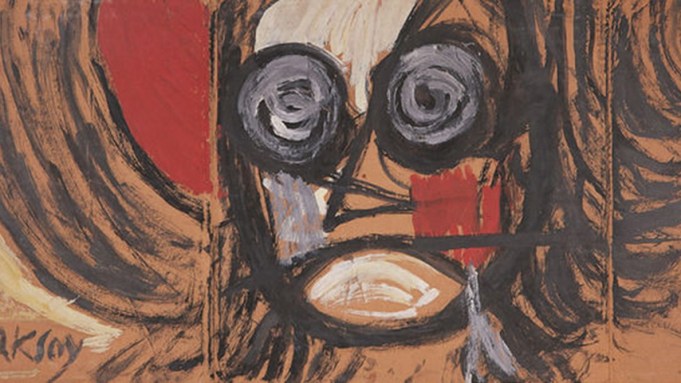 Semiha Berksoy (1910–2004) was a maverick of Turkish culture: a leading soprano since the beginnings of Turkish opera in the early 1930s; the star of Turkey’s first sound film, İstanbul Sokaklarında (On the Istanbul Streets, 1931); and an original artist whose work consisted mainly of expressive figural paintings and drawings. An eight-hour-long video by the Turner prize–shortlisted Turkish artist Kutluğ Ataman, Semiha B. Unplugged (1997), allowed Berksoy to chronicle her own legacy: anecdotes, real and invented, of an adventurous life make it a compelling watch. Ataman filmed Berksoy in her Istanbul bedroom, which, in 1994, while bedridden due to a heart condition, she had transformed into an immersive artwork featuring her drawings, paintings, jewelry, love letters, and hats. Ataman’s video helped bring wider recognition to Berksoy’s art practice, which wasn’t as well known as her singing. Her bedroom was reconstructed at the Kunstmuseum Bonn for a group exhibition in 1999, a curatorial move likely inspired by Tracey Emin’s My Bed (1998). While Berksoy hadn’t planned the work to be an installation exhibited in a gallery setting, her conception of the bedroom-as-artwork significantly predates Emin’s nonetheless. Since Berskoy’s death, her art has been shown at various venues, including the 2005 Venice Biennale, last year’s Frieze Masters, and the current Sharjah Biennial.

Back in her hometown, “Portraits” offered twenty-eight oil paintings and pastel drawings that presented a cast of unsettling characters and attested to Berksoy’s penetrating gaze. Some works depicted her friends, others portrayed imaginary figures, and a handful were self-portraits. The majority were from the late 1950s, and some had been displayed in her bedroom environment. Many of the figures were unsettling—the subject of Gülru (1982), for instance, appears to have risen from the grave, with her pale skin and large carved-out eyes—but others were more cheerful. In a 1959 painting, Berksoy captured Leman Arseven, the wife of famous painter Celal Esat Arseven, in a moment of luminous laughter. A portrait of poet Süleyman Nazif, also from 1959, mocks the long-faced versifier, while My Mother the Painter Fatma Saime (1966) imagines in austere green lines the mother Berksoy lost when she was eight.

The self-portraits included a 1998 work showing Berksoy in a well-received performance of Ariadne Auf Naxos that was part of a 1939 festival organized for Richard Strauss’s seventy-fifth birthday. The roughly eight-and-a-half-foot-wide painting, rendered in oil on unstretched cloth, presents the artist as Ariadne embracing the world, arms raised. From the same period, Crying (Self-Portrait), 1996, captures the diva at advanced age. She sheds tears to mourn friends whose deaths she notates along the bottom of the painting, her face painted in intense yellow and red. The show’s finale was Semiha Berksoy Self-Portrait (1959)—a close-up of Berksoy wearing her trademark heavy makeup and, it seems, a Venetian mask, the image evoking a moment from a life devoted to performance. Throughout the show, one witnessed an artist who harnessed powers of observation to create vivid images of those around her and of herself, demonstrating an exceptional ability to see behind the characters we play.