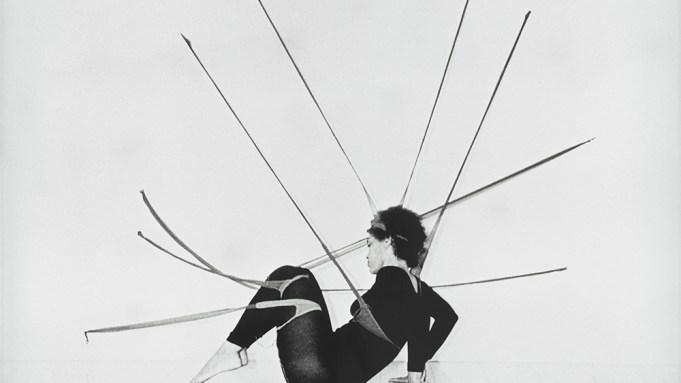 Among an array of archival documents and photos in a vitrine at the entrance to the Lenbachhaus’s Senga Nengudi exhibition lay an early artist’s statement that began: “I am working with nylon mesh because it relates to the elasticity of the human body. From tender, tight beginnings to sagging end.” The statement is dated 1977, when a thirty-four-year-old Nengudi was beginning to exhibit what would, many years later, become her most iconic body of work: the “RSVP” series. The works from that series comprise pairs of pantyhose variously filled with sand, knotted, and adorned with additional materials, and pinned to the walls or ceiling so that they stretch and dangle sensuously, at once corporeal and phantasmic. They are, depending on the context, sculptures, architectural interventions, dance partners for performers, and objects that suggest ritual use—sometimes all at once. Installed throughout the Lenbachhaus’s galleries, they were the beating heart of this exhibition: an ambitious, sensitive survey, titled “Topologies,” that focused on the artist’s output from the 1970s and ’80s as well as her return in recent decades to some of the formats she explored during that time.

Nengudi’s works in any medium convey an expansive sense of possibility as they stretch, contract, and breathe new purpose into found materials and places. The show commenced with two of her earliest bodies of work before letting go of any strict sense of chronology. Around 1970 the Chicago-born, California-raised Nengudi, then based in Los Angeles, began showing her “Water Composition” works, volumes of colored water that she heat-sealed into clear vinyl, creating baglike pieces that were sometimes geometrically shaped but often veered toward the formless. The first three works in the series (all ca. 1970) were reproduced for the exhibition. The flaccid, half-filled vinyl forms are draped over thick ropes fastened to the wall that tug them upward from the floor. Viewers at the original showings of the “Water Compositions” were invited to touch and prod them, the artist emphasizing the works’ bodily mutability.

In the years that followed, Nengudi exhibited the “Water Compositions” in California and Switzerland, but avoided showing them in New York, sensing that black audiences there would receive abstract works like these as apolitical. “That would have gone over like a lead balloon,” Nengudi recalled in a 2013 oral-history interview with Elissa Auther that has been republished in the exhibition catalogue. Thus, when she moved to New York’s Spanish Harlem, where black nationalism was prominent in the political landscape, and began cutting two-dimensional human figures out of cloth designed for flags, Nengudi may have been responding to local pressures to work representationally.

She used cords to lash the silhouettes to posts and scaffolding in alleyways (Red Devil [soul 2], 1972) or off of her own fire escape (Drifting Leaves, 1972), so that they swayed slightly, ghostlike, in the wind. The exhibition was the first time the documentation of these works had been shown publicly. Despite their apparent incongruity with the “Water Compositions” in terms of their approach to the body, these works similarly rely on a physical tension produced by cords that tug and on a give-and-take with aspects of their environment—wind, temperature, gravity, the audience. In retrospect, these qualities seem to suggest openings into the dance- and performance-based territory that Nengudi would later enter.

These same characteristics, however, marked Nengudi’s place within an emerging circle of black artists dealing with abstraction in sculpture. In 1977, she exhibited the “RSVP” works at New York’s Just Above Midtown (JAM), a gallery founded by Linda Goode Bryant that had recently developed into one of the city’s most important hubs for contemporary black art. Nengudi’s solo show ran as part of a series of exhibitions that year at JAM titled “Afro-American Artists in the Abstract Continuum of American Art: 1945–1977.” In an essay about the series, reprinted in the “Topologies” catalogue, Bryant named Nengudi, David Hammons, Susan Fitzsimmons, Gini Hamilton, and others as new members of the “Contexturalists,” a group of artists who were defining zones of interchange between their works and external phenomena—such as the moving air and gravity that activated Nengudi’s early pieces—as crucial sites of meaning.

Bryant’s analysis hews closely to formal observation, yet her insistence on understanding the artwork’s form as interdependent with a host of “marginal elements” gestures toward layers of social and symbolic implications. For example, in unpacking the role of tension, which is everywhere in Nengudi’s work, it’s hard to ignore another statement from the artist’s 1977 statement on the “RSVP” pieces: “After giving birth to my own son, I thought of black wet-nurses suckling child after child—their own as well as those of others, until their breasts rested on their knees, their energies drained.”

Nowhere in the works highlighted in “Topologies” was the margin more activated as a space of transformative potential than in Ceremony for Freeway Fets, an unrehearsed 1978 public performance that Nengudi staged in one of LA’s most marginal spaces: beneath the freeway, amid traces of the city’s roaming homeless population. Nengudi conceived the piece as a ritual that would ease frictions between female and male energies in the black community at the time. Imagining the area beneath the freeway as an African landscape, the performance mapped a mythical past onto an overlooked space in the present in order to open a pathway to collective healing. The performance was represented in the exhibition by way of documentary photographs. In one striking image, Nengudi wears a hard hat as she wraps the columns supporting the overpass with knotted nylon mesh garlands—a kind of consecration of the territory before the ritual. In others, she, Hammons, and artist Maren Hassinger move about in masks and costumes, while other people play music or look on.

Many of the works Nengudi produced over the decades have disappeared, often because they were never intended to last beyond the here and now of their original context. When she returned to the “RSVP” series in the early 2000s, at the urging of her friend and fellow artist Lorraine O’Grady, she avoided remaking many of the earlier pieces. (“How are you going to find a found object from 20 or 30 years ago?” she mused to Auther.) The unavailability of much of the earlier work may play a role in the curatorial decision to avoid a chronological layout for the installation, yet there seems to be something deeper at stake. Ritual and ceremony, which are central to Nengudi’s approach, operate according to their own sense of time, one that is not about a forward march but about repetition and reconnection.

There is something, then, in the gesture of returning decades later to an earlier stage that seems to mirror the work’s deeper structures. It is moving to watch Hassinger, with whom Nengudi has collaborated for nearly forty years, continue to dance with Nengudi’s sculptures. In a projected video, Hassinger performs a dance around R.S.V.P. X (2014), circling it, prodding it, coaxing it. The object becomes like a finely crafted instrument, or even a lover, responding to the sensitive touches of one who knows its idiosyncrasies. Nengudi’s privileging of the open-ended, intimate response (“Répondez s’il vous plaît”) over the pursuit of a conclusion remains one of her work’s most basic yet radical propositions.