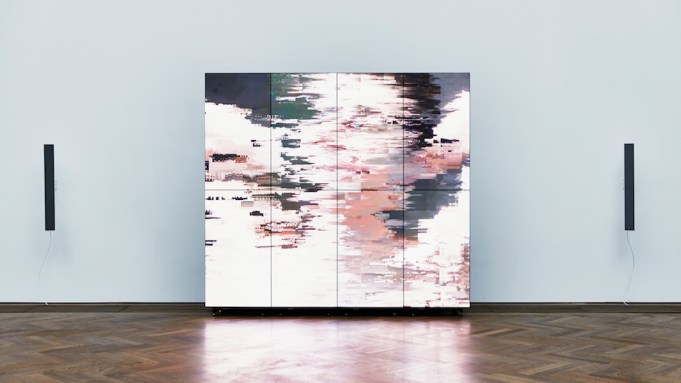 Geneva-born, Los Angeles– and Berlin-based artist Shahryar Nashat’s exhibition “The Cold Horizontals” centered on a visually seductive eighteen-minute video shown on loop across eight abutting screens. Image Is an Orphan (2017) combines found footage, computer-generated imagery, and sequences filmed by Nashat. Pink, purple, blue, and white abstract pixels vibrate, then crystallize into the form of a shirtless male smiling at the camera; a sunlit unmade bed makes for a landscape of folds and shadows; a visualization of the human retina glows green and violet. Clips sourced online feature people performing stunts for the camera, or attempting unsuccessfully to do so (one, for instance, shows someone falling onto and smashing a fish tank). Nashat plays these clips over and over, and the repeating squawks and exclamations of the performers contribute to the soundtrack, which otherwise features low, ambient music and a woman making various gnomic statements and, most frequently, repeating a set of questions: “How will I die? Who will carry me? Who will feel my aftereffects?”

Although it is never made clear whose voice this is meant to be, one can’t help but imagine it belonging to the orphaned image referred to in the video’s title. Digital images are often separated from their original sources and can be endlessly transferred. Nashat relates the contemporary urge to film and disseminate all of life’s achievements and absurdities to art historical precedents. That unmade bed, for example, is meant to refer to Felix Gonzalez-Torres’s 1991 project consisting of a billboard displaying an image of the bed he had shared with his partner, who had died that year of AIDS.

Among the spare selection of sculptures and pictures that comprised the rest of the show were wall-mounted rope works that turned out to be pieces recycled from a previous exhibition by Nashat’s partner, Adam Linder, at the same venue; the ropes are dotted with images appropriated from porn magazines. A tangled white figure lying on the ground and modeled on a crash-test dummy, Player (2017), evoked Ugo Rondinone clowns, those anonymous mute bodies that are placed on the floor of galleries, often appearing distressed. Ultimately, Nashat showed how orphaned images, although divorced from their histories, have their own vitality and durability. Images are not necessarily impoverished by our ability to easily disseminate and alter them, or by the inundation produced by our newfound need to constantly photograph and film ourselves and our surroundings. If anything, they have grown only stronger, due to the technologies that have made them significantly more accessible and malleable.