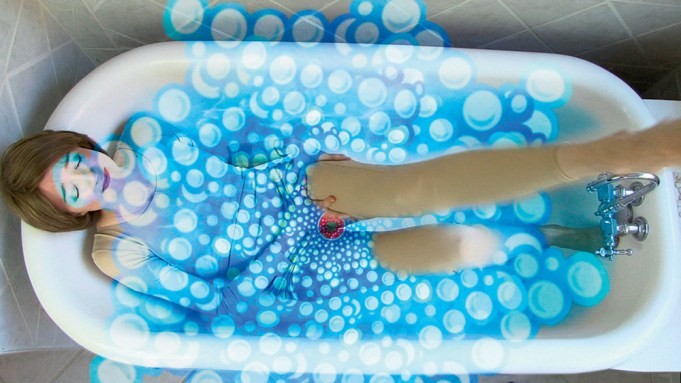 Shana Moulton’s alter ego Cynthia is back, and she’s still very, very anxious. The star of Moulton’s long-running video and performance series “Whispering Pines” (2002–) suffers from agoraphobia and hypochondria. She turns to self-care. She soaks with bath salts, carries out a synchronized swimming–like floor routine, and demonstrates a full-throated embrace of New Age spiritualities: anything to realign her chakras and cushion the harsh contours of daily life. The series takes its name from Moulton’s parents’ senior-citizen mobile-home park, which is located on the edge of Yosemite; it all feels very crunchily Californian. This tenth installment was originally conceived as a single-act operatic performance based on Moulton’s video series and was produced in collaboration with composer Nick Hallett. After receiving a grant, the duo adapted the opera for the internet, in the form of an episodic web series. Its first three videos were recently on view at Canada gallery and can be found online (www.whisperingpines10.com); four more will eventually follow.

Cynthia’s dreams are feverishly oversaturated, yet she seems peaceful in repose, her mouth curved into a small smile under her sleep mask. Her wig is immaculate, and her rather mumsy flowery housedress oddly chic. But she sleeps in her makeup—slathered 1980s blue eye shadow and all—and is not quite in control. She’s self-conscious even in the safety of her own home, surrounded by friendly pastels and kooky decor. Perhaps it’s warranted, for her assorted tchotchkes twirl and float of their own accord. The faces of clocks and figurines morph into those of ethereal people singing beautiful, soaring arias.

Biochemical reactions are expressed as lo-fi digital effects that manage to endear despite their high kitsch. A roiling bulge-effect sphere that swirls about Cynthia’s body like a meteorological graphic of a weather event, for example, conveys the somatic feeling of dread. The saturated palette, meanwhile, seems to map her heightened anxiety.

An aria performed by singer Katie Eastburn tells the true story of Julia Butterfly Hill, who, to protest logging, spent over two years living in a redwood tree. Hill’s didacticism is tempered by Eastburn’s sweet voice and earnest entreaty to stretch yourself, to find your own tree, to become like a bird and access your inner power and magic. Her demeanor is less radical environmental activist and more a mix of elementary school teacher and self-help guru, but Cynthia is inspired. She’s going to find her own tree—her own cause—all without straying too far from her living room.

And find a tree she does—one that appears to be just outside her house, or, perhaps, it’s in her mind. She swipes at the trunk and canopy with the kind of haptic gestures you would use on an iPad, while the image’s aspect ratio continually shifts in a manner that suggests the tree is breathing. Online, the videos appear in descending order against a background of the tree, so that viewers “climb” the trunk as they watch each successive one. Images of Cynthia’s domestic tchotchkes hover above the tree, linked to websites where you can buy her Miracle exercise ball, or listen to Kate Bush, or learn more about Hill’s activism. Pointing to the environmentalism and consumerism that buttress much New Age spirituality, these extras work to make Cynthia’s world feel even more real. We might present different versions of ourselves in different contexts or media, but whichever way we encounter her—onstage or on-screen—Cynthia, at least, remains true to herself.

At Chez Noir, a Michelin 3-Star Standout Finally Leads His Own Restaurant