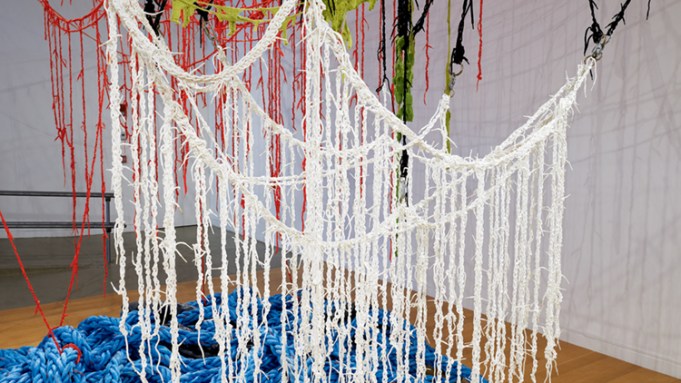 Sheila Pepe is a maker, as she herself puts it, but the things she makes are frequently unmade. The ephemerality and shape-shifting propensities of her art may be one reason her thirty-year career is less well known than it should be; the other is its rootedness in craft-based women’s practices. Pepe’s main medium is fiber, although as the traveling survey “Sheila Pepe: Hot Mess Formalism,” here at its final venue, testifies, she has also created mixed-medium sculptures, videos, and works on paper. Consisting of knotted and crocheted shoelaces, nautical rope, parachute cords, and yarn, among other industrial and natural materials, her most ambitious installations vault and dangle their way through spacious galleries, atria, and courtyards, and change according to the site. That these installations are sometimes fabricated with help from locals, who arrive to crochet them into existence, and deconstructed in similar fashion, with such collaborators unraveling them at the end of the exhibition run, provides an intriguing variable to the work of this artist, who has produced the pieces all over the world.

“Hot Mess Formalism” can be seen as more a sampling than a survey per se—not least because of the aforementioned ephemeral quality of some of her work. The five large-scale installations in the exhibition are not of that sort, but have been loaned from various collections. The earliest piece on view dates to 1983, and the latest, 91 BCE ⌛ Not So Good for Emperors, was commissioned by the Phoenix Museum of Art for the show’s debut in fall 2017. Displayed on big tables are dozens of Pepe’s “Votive Moderns” (1994–): engaging little assemblages, each with a distinct personality, that combine art materials and industrial castoffs. Throughout the show, in works large and small, Pepe combines architectural nerve, material dexterity, and an appealing, awkward choreography.

Beginning as a thin trickle of blue cord in a stairwell, 91 BCE rises into a corridor and two rooms on the second floor, morphing into stretches of metal chain mail and tan-colored crocheted patches. Some portions rest against walls; others proliferate into a room-blocking chaos of stuttering lines and shapes. Such works feel like drawings in space, as much sketched as constructed—an intentional effect; and a large group of gouaches (wonky geometric abstractions alluding to urban infrastructure) offers a pictorial counterpart to these three-dimensional acrobatics. In a documentary video playing at the show, Pepe discusses some of the ideas behind 91 BCE. In the title year, as alluded to by the chain mail in the work, violent uprisings against ruling powers occurred in both Italy and China. The work demonstrates Pepe’s typical tough attitude, itself a form of resistance: deeply feminist and queer in sensibility, she challenges the dominance of monumental form with patient, accretive labor.

A veneration of women’s work has undergirded Pepe’s structures from the start. In Women Are Bricks: Mobile Bricks (1983), triangular bricks mounted on ceramic rollers are arranged in a grid on a stretch of found carpet. They could almost be toys, but for the rough, industrial quality of the brick and the rigor of seriality and gridding. Here we see Pepe’s origins as a ceramist and a devotee of the Post-Minimalists, particularly Eva Hesse. Pepe speaks often of her post–Vatican II Catholic childhood, and of being raised by industrious Italian American parents, who owned a restaurant in New Jersey; we see homages to these milieux in the imposing Second Vatican Council Wrap (2013), a quasi-figurative installation incorporating metallic thread and a fragile baldachin, and in a video showing her hands rolling meatballs and placing them in a grid. The ubiquitous shoelaces refer to her cobbler grandfather, the crocheting to her mother’s craft. Still, Pepe pushes her tributes to an extreme, her obsessive energy transforming the most ordinary materials into the great “hot mess” that is their strength and appeal.