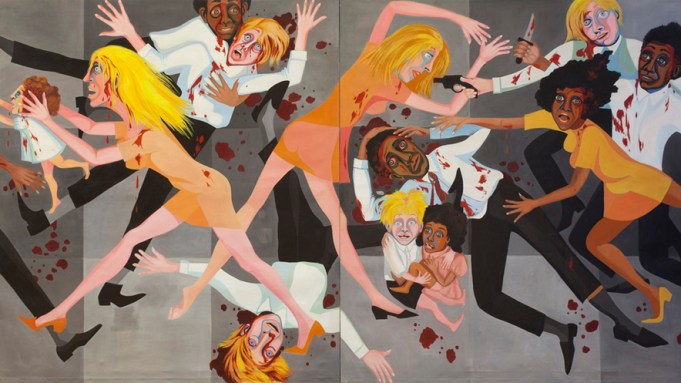 Norman Lewis’s striking painting America the Beautiful (1960) confronts visitors near the entrance to Tate Modern’s exhibition “Soul of a Nation: Art in the Age of Black Power.” Initially, the work appears to be an abstract arrangement of craggy white motifs dancing on a black ground, but soon the shapes take on the form of Ku Klux Klan hoods interspersed with white crosses. Lewis’s painting embodies several core dilemmas facing African American artists during the tumultuous period the exhibition spans, from 1963 to 1983. Could black artists legitimately pursue art for art’s sake or did they have a moral obligation to produce art that served the cause of civil rights? Was abstract art capable of speaking to a black audience? Did such a thing as a black aesthetic exist?

“Soul of a Nation,” which travels to the Crystal Bridges Museum of American Art in Arkansas (Feb. 3–Apr. 23, 2018) and the Brooklyn Museum (Sept. 7, 2018–Feb. 3, 2019), brings together works by more than sixty mainly African American artists who gave energetic voice to such questions during this period of mass marches, assassinations, and KKK attacks. Encompassing political posters, photographs, collages, sculptures, films, prints, and paintings, the show demonstrates different ways black artists from across the United States contended with issues of identity and representation and the role of art in a society pervaded with racism. A tale of trauma and revolution as well as strength and hope shines through.

Tate curators Mark Godfrey and Zoe Whitley faced a tough task in pulling the many works and themes into a cohesive whole. The show is organized largely by artistic groupings and styles over twelve rooms. It is not always tidy and overlaps occur, but effective links are drawn between the artists, the few galleries that exhibited them, and the historic events that inspired their work. The presentation begins with the Spiral group in New York, which Lewis, Romare Bearden, Charles Alston, and Hale Woodruff founded in 1963 as a means for members to discuss their role as African American artists working amid civil rights struggles. As this first room shows, Spiral participants diverged significantly in their approaches (though they did agree to limit their palette to black and white for their sole group show, in 1965). The works range from Lewis’s semiabstract painting to Bearden’s dynamic collages of photo fragments from popular magazines depicting Harlem scenes, a religious ritual, and a magical folkloric figure called a Conjur woman to Reginald Gammon’s stark portrait of angry protesters, Freedom Now (1963).

As the Civil Rights movement evolved into Black Power, many black artists felt that galleries were not the right venue for galvanizing the community. “The ghetto itself is the gallery for the revolutionary artist,” Emory Douglas, the Black Panther Party’s minister of culture, is quoted as saying in the catalogue. Douglas designed eye-catching posters and illustrations for the Black Panther newspaper, as well as pamphlets and other graphic material, that were reminiscent of Soviet agitprop. On the South Side of Chicago, a collective of artists, writers, and educators called the Organization of Black American Culture (OBAC) created a vibrant mural, The Wall of Respect (1967), that celebrated black luminaries in diverse fields and inspired similar initiatives in other cities. A segment of the mural commemorating the writer Amiri Baraka is on display in the show. Other artists deployed traditional forms like sculpture and canvas-based painting to make potent works in support of Black Power. Elizabeth Catlett’s giant mahogany fist and Dana C. Chandler Jr.’s re-creation of the bullet-ridden door of slain Black Panther activist Fred Hampton are powerful, if unsubtle, works expressing solidarity. Conveying a more ambiguous view in the same exhibition section (“Figuring Black Power”), Faith Ringgold’s painting American People Series #20: Die (1967) portrays race riot carnage, with blood-spattered adults and children tumbling in wide-eyed terror amid guns and violence.

The theme of resistance to the American state looms large in the show. A number of artists employed the Stars and Stripes ironically to underscore their alienation from the privileged white majority. In the painting Did the Bear Sit under the Tree? (1969), for instance, Benny Andrews pitted a man with balled fists and a zipper for a mouth against the American flag, while in the body print Injustice Case (1970) David Hammons used a cut-up flag to frame a depiction of Black Panther Party cofounder Bobby Seale bound and gagged on a chair in court.

Several artists in Los Angeles delivered social critiques in the form of assemblages of found materials. Melvin Edwards welded together machine parts and tools to form brutally elegant wall sculptures called “Lynch Fragments.” Betye Saar made acerbic sculptures from racist memorabilia. Her Liberation of Aunt Jemima (1972) subverts the Aunt Jemima stereotype by presenting in a shrinelike box a notepad holder in the form of a cheery black mammy bearing a broom and a shotgun and with an image of a black fist rising up in front of her. These works are superbly juxtaposed in a room with disquieting doll sculptures John Outterbridge made between the early 1970s and 1982 as part of his “Ethnic Heritage” series and totems Noah Purifoy constructed out of street detritus from the 1965 Watts riots.

Abstract artists also sought to create works that would speak to black culture, even if their means were less direct than those of figurative artists, as in William T. Williams’s joyful interplay of multicolored diagonal forms paying homage to the jazz musician John Coltrane (Trane, 1969) and Sam Gilliam’s mottled-purple, crimson-stained canvas marking the first anniversary of Martin Luther King Jr.’s assassination (April 4, 1969). Many in the black community, however, criticized abstract art as irrelevant and dictated by white aesthetic traditions, prompting some artists to rethink their styles. In the early ’70s, Alvin Loving turned his back on his acclaimed geometric abstractions and, influenced by jazz and the quilting tradition, began making improvised collages from cut-up canvases and other materials.

That such an ambitious survey of American Civil Rights–era art would be organized in London might strike some as curious. The show originated with Godfrey’s work researching North American artists that previous generations of Tate curators had overlooked in terms of acquisitions. Many of the participating artists are being shown in Britain for the first time, and even at home African American artists largely remain less known than their white peers (though the Brooklyn Museum’s recent show “We Wanted a Revolution: Black Radical Women, 1965–85” went some way toward exposing viewers to a range of neglected female contributors to this same period). Presenting work that has not been adequately historicized due to the artists’ skin color and their pursuit of themes that challenge dominant narratives, “Soul of a Nation” is an electric exhibition that attests to how significantly racial biases have limited the canon.