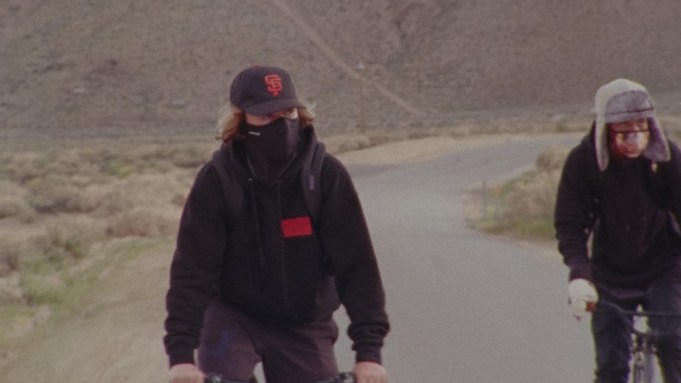 Stanya Kahn’s film No Go Backs (2020)—streaming on Vielmetter Los Angeles’s website through May 15—opens with a majestic, symmetrical shot of two teenage boys standing in the desert under a hazy sky, peeing into the scrub. For the first portion of the film, they appear to be the only people left alive in the world. They bike through a seemingly depopulated California, undertaking a journey that loosely traces, in reverse, the course of the aqueduct system that delivers water down to Los Angeles from the Sierras. They shelter in the shadow of sandstone spires. Conspicuously, they never speak. Instead, the narrative—if you can call it that—is driven by their desultory migration and the things they find along the way. They search abandoned structures, small buildings that, stripped to their studs, are barely buildings. They try on fake fur coats in a trashed homesteader cabin. One of the protagonists drags a fireplace poker out of the rubble covering the floor. Was there even a fireplace? Was this ever a home?

Kahn has frequently portrayed contemporary civilization as a wasteland of images and objects in her work—which includes performances and photographs in addition to films—but No Go Backs may be her starkest, most atmospheric treatment of the theme to date. Her earlier films tended toward a humorous, even slapstick, feel. In them, loquacious characters, usually played by the artist herself, often wander the margins of LA, delivering monologues prompted by the abandoned or abject things they encounter. In a 2008 film Kahn made in collaboration with Harry Dodge, All Together Now, her character discovers a pair of dead kittens in an alley. She buries them, carrying out a tender ritual that alludes to the larger human project of making meaning out of the senseless. In the 2006 Can’t Swallow It, Can’t Spit It Out, also made with Dodge, Kahn’s character happens upon a pile of ash sitting against a singed stucco wall. “Look, a person burned. Zoom in on that, man,” she says, addressing the camera. “It’s like some guy was just standing there, and then he burned. That kind of stuff happens.” It does—and the greater truth, as Kahn suggests throughout her body of work, is that all of civilization consists of the singed remains of obscure past events.

In No Go Backs, the adults who made whatever mess the protagonists have found themselves in are gone, along with their ambitions, and the boys are too stunned, wary, or ill-equipped to pick up the plot that got aborted. Halfway through the film, other teenagers emerge, apparently following the same path as the boys. Their movement out of the city, along the Los Angeles River, against its flow, counters the expectation of progress their forebears had. Their escape route recalls the young misfits’ path in Antonioni’s Zabriskie Point (1970), moving from civilization’s discontents toward the dirty, splendid freedom of nature. In Kahn’s film, however, the landscape is presented in a deadpan manner, unidealized and just there—a monotonous desert or tedious forest that you simply move through.

In fact, while a strong sense of nostalgia runs through No Go Backs, the longing does not appear to be for some vague return to nature. Flashbacks pepper the film: the boys skateboarding in a driveway, visiting a food truck. One of the protagonists is played by Kahn’s son, and in one flashback we see this character sitting in his bedroom, with a photo on the wall of Kahn holding him as a child. The film’s nostalgia, in the end, is for the world that we live in today, the one we seem determined to destroy.