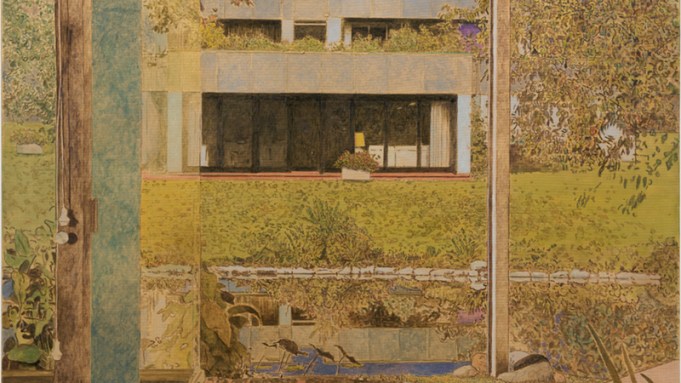 Stefan Kürten’s intricate paintings of depopulated domestic interiors and enigmatic architectural spaces are “atmospheric” in Jean Baudrillard’s sense of the term. In his landmark 1968 book The System of Objects, the French theorist analyzed how the furnishings, decorative objects, and color schemes in bourgeois homes—the components of atmosphere—operate as a part of overarching sign systems. In Baudrillard’s critique, domestic environments had become so complex, so rich in “cultural connotations,” that they threatened to eclipse their inhabitants. The theorist speculated that objects in the modern world had attained a new kind of cultural agency, like “actors in a global process in which man is merely . . . the spectator.”

A hushed and ominous air, potentially symptomatic of this alienated condition, pervades Kürten’s Wish You Were Here (2018), one of the highlights of this exhibition of fourteen recent paintings. The work, rendered in acrylic and ink on linen, offers an exterior view of a single-story, glass-walled modernist house that might have been designed by Mies van der Rohe. Faintly visible on an interior wall, a late Matisse cutout of a blue figure signals the prosperity of the property’s owner. Two lounge chairs languish by the pool in the foreground. The pool’s greenish, rippling water echoes the rhythmically patterned leaves of the trees that loom over the house. In most of Kürten’s images, some element disturbs the ostensibly idyllic setting. Here, an incongruous grid of tiny gray brushstrokes partially veils the sky, suggesting an enormous net enveloping the home and grounds. The luxurious residence suddenly appears claustrophobic. The openness of the architecture now seems to convey a sense of abandonment, as if the inhabitants had to abruptly vacate.

Kürten, who was born in Düsseldorf in 1963 and studied at the Kunstakademie Düsseldorf and the San Francisco Art Institute, is an accomplished rock musician as well as an artist, and often alludes to music in his works. The aforementioned painting is likely titled after the Pink Floyd song of the same name, whose opening line asks, “So you think you can tell heaven from hell?” The question befits a painting in which lavish, ornamental details belie an eerie, caustic atmosphere. The exhibition borrowed the title of David Bowie’s 1973 song “The Prettiest Star,” and, indeed, the many paintings for which Kürten used gold, silver, or copper pigment for his grounds—such as Things That Dreams Are Made Of and Dark of the Sun (both 2018)—owe something to Bowie’s glam-rock phase, even if they are more directly aligned with uber-decorative work of Gustav Klimt and the German Jugendstil painters from the turn of the twentieth century. Kürten’s scenes also recall photorealist Jack Mendenhall’s sun-dappled paintings of luxury vacation spots and Enoc Perez’s ghostly architecture studies.

Kürten sometimes pursues a very different type of composition, in which assortments of contemporary symbols conjure a world of global politics and pop culture. From a distance, Perfect World (2016–17)—the largest painting on view, at more than twelve feet across—resembles wallpaper or a Persian carpet with floral patterning. Embedded within the dense foliage, however, are tiny symbols and logos: the American flag, the US dollar sign, the misspelled name “Al Qaida,” Mickey Mouse, the Coca-Cola trademark. In such works, Kürten foregoes his usual domestic scenes to produce something more akin to a natural world, albeit one that is run through with corporate logos and political messaging. In the introduction to The System of Objects, Baudrillard questions whether we can “classify the luxuriant growth of objects as we do flora and fauna, completely with tropical and glacial species, sudden mutations, and varieties threatened by extinction.” Kürten’s painting could be a riff on Baudrillard’s statement, with brands seeming to propagate like organisms.