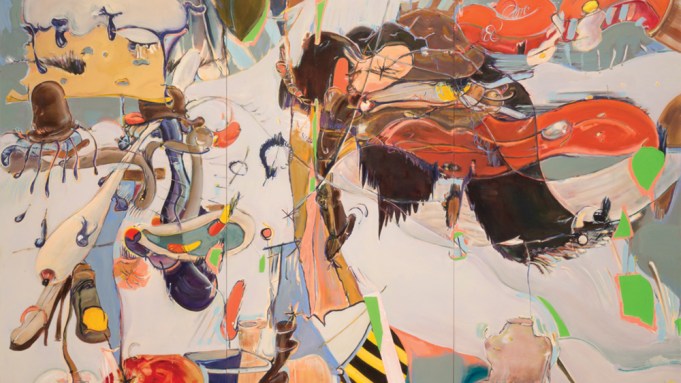 “Disney on acid” may be the best descriptor for the eight paintings in Berlin-based Stefanie Heinze’s first exhibition in the United States. In the works (all 2017), abstracted cartoonish forms float on backgrounds rendered in mostly bright or pastel hues. Mickey Mouse noses emerge from the chaos, as does a Dumbo-esque head, suggesting that the show’s title, “Food for the Young (Oozing Out),” had two meanings. While the paintings do depict forms resembling edible items (potatoes, a hamburger, a slice of Swiss cheese), they also seem meant as a commentary on the consumption of visual media. They turn the movies we “feed” children into nightmarish scenes.

Heinze seems preoccupied with the corporeal. Eyeballs, tongues, breasts, fingers, and lips punctuate the images. In Cephalopod (Silken Touch), seven legs appear to emerge from a thick-lipped mouth whose crooked teeth chomp down on them. The motif, suggesting a sexualized marine creature, hovers against a background of light blue with inky black splotches. Heinze’s title is again clever: “silken touch” is the sort of gauzy phrase that could be used to brand any number of commercial products. It’s the name of a current line of house paint, for instance, and has been used in the past by various pantyhose companies. Indeed, the paint here is flat and even, as it is throughout the works, and the legs lissome and smooth, tapering at points.

The three-panel Trilling Gr (Cover Grant)—the largest work on view, at roughly eight by eleven feet—features what looks like billowing gray fabric rushing from an arched brown shape at the top of the composition, as if it were vomit from a mouth. A cluster of ambiguous forms tumbles out along with it. Among them: a popping eyeball that might be breast, a brown hat that might be sea creature, a torso seen from behind that might be a severed scrotum. A finger with a bright yellow nail zooms toward us, while a spread suggesting an apple and some vessels sits on a flat off-white surface portrayed along the work’s bottom edge. There is, needless to say, a lot going on. The painting exudes a sense of velocity and zany, youthful energy, while also paying homage to more traditional forms, such as the still life and the figure drawing.

Heinze’s closest forebears are probably Peter Saul (another artist from Boone’s roster) and Sue Williams. The three share a proclivity for bright, graphic, and violent imagery rendered in comic strip–infused styles. But where Saul’s work offers political satire and Williams’s manifests a clear feminist perspective, Heinze’s comes across as relatively detached. The realm she portrays is accessible to anyone who can get high, sit on a couch, and watch a movie—no engagement with the larger world necessary. While her canvases are clever and imaginative, they’re also a little glib.