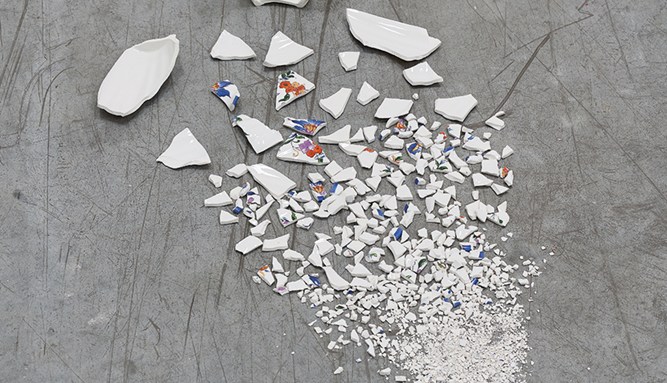 Since 2014, Stéphanie Saadé has been picking up stray beads wherever she finds them. Beads she spotted on walks in Paris, Amsterdam, Beirut, and Mexico City are strung together on a delicate gold chain in her Necklace of Found Beads, which hangs on a wall in this exhibition. The piece is left open—the artist plans to keep adding beads until the number coincides with her age at the time—and is typical of Saadé’s poetic, often enigmatic practice. Like many Lebanese artists of her generation who grew up in the shadow of the country’s civil war, she is interested in experiences of displacement and the mutability of history, but she explores them by mining a deeply personal, affective realm.

Suspended from the ceiling, the show’s title work, The Encounter of the First and Last Particles of Dust (2019), is a large square of dark blue carpet that the artist removed from her childhood bedroom in Beirut and embroidered with gold thread. The embroidery represents the trajectories of eighteen formative journeys that she took as a teenager in the decade following the end of the war, when it became possible to move freely around the country. The golden lines weave between the physical traces of her life during those years, such as marks where her bed had been placed and stains blooming across the beige underside. Though the embroidery indicates the contours of roads—a mix of straight lines suggesting highways and wriggly ones conveying mountain paths—Saadé does not offer any information about the journeys or their destinations.

The exhibition is full of such sentimental gestures. Mounted on the wall across from the gallery entrance, Elastic Distance (2017) is an iPhone whose screen displays how many meters separate the artist and her exhibition—or more accurately, her own phone from its twin. When I first visited the show, the number was fifteen and decreasing: the artist was close by, walking toward the gallery. When I returned a week later, the screen showed a static 4,432,151—Saadé was now several thousand kilometers away. There’s something sweetly melancholy about these two iPhones marking their distance from each other, a separated pair tethered by GPS. To viewers familiar with the works Saadé has made with her partner, artist Charbel-Joseph H. Boutros, which are often about their own relationship, it is likely to evoke the mediated nature of transcontinental love, but Saadé leaves it open to interpretation: it might equally suggest the distance between a parent and child, two friends, or a migrant and their home.

A blown-up digital photograph in one corner of the gallery reflects on the intimacy of our relationships with the devices themselves. Bearing the doubly literal title Digiprints, it traces the movements of the artist’s fingers across her phone’s touch screen—an abstract painting in the medium of sweat, grease, and skin cells. The result, with its streaky swooshes recording taps and swipes, recalls musical or dance notation. For Accelerated Time (2014–18), displayed on the floor of the same gallery space, Saadé dissected a vase into smaller and smaller pieces, arranging them in a neat V formation that starts with fragments indicating the vessel’s original round shape and progressively gives way to dust.

Saadé has left considerable distance between the five works in the show, the emptiness in the gallery echoing their spare quality. There is no wall text, and captions can be found only on a handout. Remarkably, the exhibition never feels austere. But this is a slippery sleight of hand: the works seem so vulnerable and actually reveal so little.