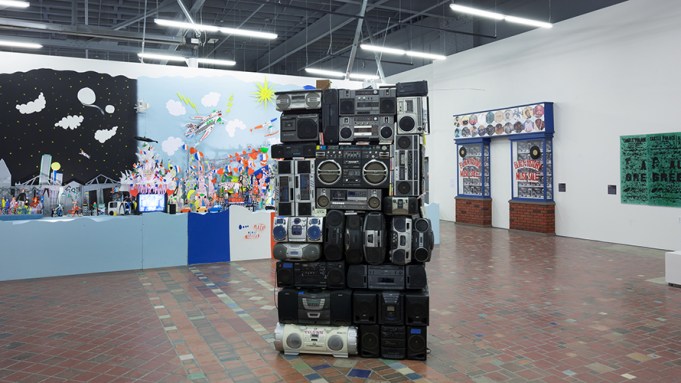 American novelist and musician James Greer—who spent two years in the mid-1990s playing with the indie rock band Guided by Voices—discusses the way lyrics reflect the listener’s emotions rather than the songwriter’s intentions. “Even the most nakedly vulnerable song ends up as the soundtrack to someone else’s heartbreak,” he writes in his contribution to a symposium in The Believer’s 2017 August/September music-themed issue. “Whether or not it reflects the writer’s actual experience, or even his or her imagination, should be irrelevant.”

The observation that music produced for a wide audience can be exceedingly personal underscores a challenge undertaken by “Sonic Rebellion: Music as Resistance,“ which opened at the Museum of Contemporary Art Detroit this month, and runs through January 7, 2018. The show provides ample social context in the form of posters, photos, documentation, musical instruments, and videos. There is footage from the 1967 Detroit Uprising showing tanks dispatched on the city streets and snipers firing from buildings. However, MOCAD juxtaposes this historical information with presentations that emphasize the privacy of interpretation. Cauleen Smith’s Black Utopia (2012), a double LP featuring music, lectures, interviews, and other material drawn from Sun Ra’s archives in Chicago, is configured for “Sonic Rebellion” as a listening station, where a visitor can sit in a rattan chair among scattered records and a potted plant.

In “Sonic Rebellion,” artworks are presented with little distinction alongside archival material, and there are plenty of items that fit both categories. The keyboard on which techno pioneer Derrick May composed “Strings of Life” (1987) functions as a historic marker rather than an art object. A set of amplifiers belonging to guitarist Jack White, customized in 2003 at the behest of the musician by influential Detroit artist Gordon Newton, serves as both an artwork and relic. The reference materials were drawn from local networks, grounding the exhibition in Detroit’s history of musical innovation, which encompasses Motown Records, techno culture, and the EDM scene, as well as genre-busting works by musicians schooled in indie rock and second-generation hip-hop.

MOCAD regularly relies on the creative efforts of its installers and preparators, who, for example, helped determine the visual presentation of Smith’s Black Utopia. But staff members become lenders as well in this show, with pictures, flyers, and other ephemera sourced directly from employees. There are also handbills from the collection of Miz Korona, a Detroit emcee who appeared in the film 8 Mile (2002) as an auto plant employee freestyle rapping by the lunch truck.

In conversation with this homegrown ephemera are artworks that touch on various niches within the theme—sometimes by artists from other cities. Harlem-based Bayeté Ross Smith created a Detroit iteration of an ongoing sound series. Titled Got the Power: Detroit (2017), it consists of a stack of crowdsourced boom boxes emitting a collection of stories, songs, and ambient audio. It perfectly embodies the concept of the collective merging of many individual voices into a song of place. Mickalene Thomas’s dual-screen video work Do I Look Like a Lady? (Comedians and Singers), 2016, presents syncopated smash cuts of black female entertainers, from Nina Simone to Whoopi Goldberg to a lineup of ’80s-era Apollo comediennes. The exhibition regularly recognizes the radical entertainers that soundtracked many an act of rebellion. For instance, there are posters representing the hugely influential proto-punk band MC5, which was affiliated with the far-left White Panther movement.

Punk receives a whimsical treatment with Brooklyn-based artist Nathan Carter’s elaborate “Ladies and Gentlemen, Meet the DRAMASTICS” (2016), an installation encompassing the handmade characters and paper stage sets that went into the making of the puppet-mockumentary The DRAMASTICS Are Loud  (2017), which is also on view. The film chronicles the adventures of an imaginary all-female punk band, The DRAMASTICS, as they confront failure, fame, and fortune, and eventually exit the scene. The bright and lively diorama is funny and irreverent, creates an appealing visual break from other, equipment-heavy work, and cheekily captures the DIY ethos at the heart of the punk movement, if not its more abrasive aesthetics. Carter, who has taken on musical subjects before, as in the mixed-medium installation Slayer Metallica (2012), has said that for many years he wanted to be an angry punk rocker and sees himself in each of the four band members.

A concurrent exhibition, titled “Punk House,” conveniently sited in the museum’s adjacent Mike Kelley Mobile Homestead, offered artifacts and artworks by some of the flesh-and-blood participants in Detroit’s punk scene. Curated by Kelley’s Destroy All Monsters bandmate, Carey Loren, “Punk House”provides a colorful wonderland of paraphernalia from Loren’s personal collection of ephemera and those of others within his network. It also features a commissioned interior mural by London-based artist Savage Pencil (Edwin Pouncey) and a new site-specific Wild West–themed installation by Detroit-based artist Jimbo Easter (James J. Millross). On opening night, there was a series of live performances by local and national musicians, including experimental noise duo Kuperus/Miller, performing on the Homestead lawn.

“Sonic Rebellion” presents a multifaceted look at some of Detroit’s musical history, and the way that Detroiters have parlayed personal points of inspiration into groundbreaking music with social pushback. It also places this history in a global art context. However, even though the artworks are dynamic, they are all decidedly more restrained than the raucous performers at the opening. But perhaps, to return to James Greer, it is worthwhile to remember that, like music, art does not offer definitive answers, only the opportunity to create our own experience, and the exhibition facilitated a space for this process.