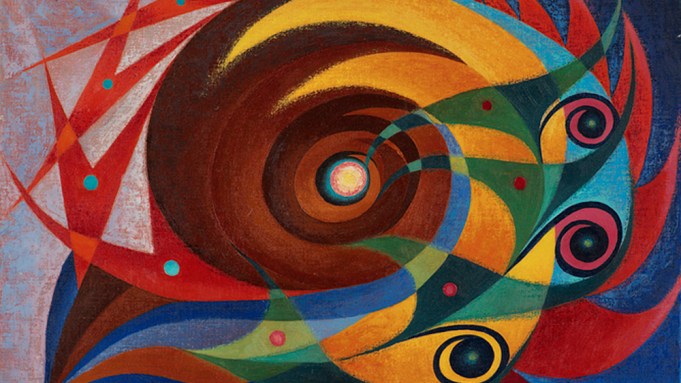 Dick West’s Spatial Whorl (1949–50), a small oil on canvas with a swirl of earthy browns and yellows punctuated by hot pinks, sky blues, and sharp red spines, is the first painting visitors see at “Stretching the Canvas: Eight Decades of Native Painting,” a new long-term exhibition at the New York branch of the Smithsonian’s National Museum of the American Indian, featuring works from the institution’s collection. “What is American Indian about this graceful abstraction?” a label asks. The question is a trap for the essentialist viewer who would give any answer other than, “It was painted by an American Indian artist.” One could say that the elongated orange-and-red arrows seem to evoke quillwork, or that the central yellow disc suggests the Sun Dance ceremony that West depicted in other paintings—but only by cherry-picking details from the many fluid elements of the composition.

The Nez Perce Tribe Paid More Than $600,000 for Their Own Artifacts. Now They've Been Repaid

“Stretching the Canvas” does not aim to offer a comprehensive survey or conclusive definition of American Indian painting. Rather, it advocates for the many ways that Native artists have maneuvered around systems of art’s production and reception that would deny them a “right to individualism,” as the Yanktonai Dakota artist Oscar Howe wrote in a 1958 letter protesting the rejection of his work from a competition for not being “Indian” enough. The thirty-nine paintings by thirty artists at NMAI prove too multifarious for any single idea of a “Native style.” Instead this celebration of the museum’s painting collection demonstrates how a history of heterogeneity counters essentialist rhetoric. Tracing the many lines of Native modernism, the show should be a bellwether for the institutions that still exclude these stories.

Spatial Whorl was one of six abstractions painted by West, a Southern Cheyenne artist, for his MFA thesis at the University of Oklahoma. It seems to refute the figurative dance and ceremonial scenes for which he is best known. One such painting from 1940–60, depicting a male dancer, hangs in the narrow adjacent gallery labeled Training Grounds, one of five thematic sections in the show. The works included therein highlight how art programs at Bacone College in Muskogee, Oklahoma, and the Studio program at the Santa Fe Indian School (later replaced by the Institute of American Indian Arts, or IAIA) educated a generation of pre-war Native students in the flat, illustrative manner that became known as the Studio Style. While adherence to this style and “traditional” subject matter was a myopic dogma for many artists, it was nonetheless a revolutionary act of modern expression in the face of stereotypical expectations for Native art, which was often not considered fine art at all. The Shálako People (1930), a watercolor by Hopi Pueblo painter Fred Kabotie, is an exquisite example from this period depicting costumed dancers in a Zuni winter ceremony. Their complex geometric headdresses and orange-and-white feathered robes stand flat against a neutral background, alienated from space in a distinctly modernist way.

“Grand Ambitions,” the opening double-winged section, presents Native painters of various periods at the cutting edge of both political and formal conversations. In Jaune Quick-to-See Smith’s Trade Canoe, Adrift (2015), a birch-bark canoe bursts from a yellow sky and red water, brimming with Syrian refugees, masks, and fish. The work links worldwide migrant crises with struggles for federal recognition of Indigenous land rights. Fifty years earlier, Fritz Scholder’s Indian and Rhinoceros (1968) similarly took on federal controls by depicting the Bureau of Indian Affairs as the eponymous pachyderm against a royal purple field, its back turned on a Native man casting a dubious eye over his shoulder. Ironically, Scholder’s painting went on tour throughout Europe with the US Information Agency in the 1970s as an agent of Cold War cultural diplomacy.

Landscape is a recurring theme. Some artists indicate their relationships to ancestral territories and heritage through figuration, while others suggest them in abstract compositions, such as the squeezed and stratified mountain ranges that emerge in James Lavadour’s Blanket (2005). Native artists paint not only their ancestral lands but their adopted homes, too; as with artists of all backgrounds, many of them have chosen to live in New York. With the snaking acrylic and charcoal coils of Brooklyn (2004), Pascua Yaqui painter Mario Martinez pays homage to the borough where he lives. Turquoise, ochre, and black markings evoke subway lines and topographic elements. Martinez calls such works of his “Yaquiscapes,” as they employ color schemes redolent of his Southwest origins. It hangs next to the newly acquired White Environ #5 (1967) by George Morrison, an exemplary white monochrome in the signature horizon line style of the Grand Portage Chippewa painter, who studied at the Art Students League in the 1940s and was active in Abstract Expressionist circles.

Though Morrison disavowed the reading of “Indian themes” and identity in his paintings, he would come later in life to admit the extent to which his abstractions were inspired by the light and rocky shores of his Lake Superior home territory. Artists coming of age in the 1960s and ’70s were increasingly concerned with the formal nature of painting as they struggled for inclusion in “mainstream” centers like New York, yet tended to be less coy about their sources of inspiration. The section Cosmopolitans offers a tight look at such painters, who often chose to avoid figurative depictions of Indigenous subjects in favor of abstraction, expressionism, and symbolism. The venerable Kay WalkingStick (Cherokee) and recently deceased Frank LaPeña (Nomtipom Wintu) combine geometric abstractions with expressionistic color and brushy treatments evoking Native content; WalkingStick’s parfleche-like composition Homage to Chief Joseph (Chief Joseph #1), 1975, is titled after the Nez Perce leader, and the nail-studded inner red circle of LaPeña’s casein-on-Masonite Foot Steps (1968) simultaneously evokes a Plains medicine shield, the sacred circle, and Constructivist geometries. Standing Water (2002), a relatively small-scale painting by Emmi Whitehorse (Navajo), likewise hums with biotic swirls and stratigraphic marks over layered fields of color.

The sections Reclaiming the Abstract and Indian Pop further build out the foundational history of Native painting, with sections dedicated to artists who rejected Studio Style figuration in favor of abstractions inspired by historic Indigenous designs translated from pottery, textiles, and basketry, as well as experiments in Pop art that emerged from the IAIA. Dance Break (1982) by Harry Fonseca, a Maidu/Native Hawaiian artist, irreverently depicts Pueblo sacred clowns in the guise of the trickster figure Coyote, eating cotton candy and smoking cigarettes— a far cry from Kabotie’s ceremonious figures. Fonseca’s pink resonates with the rosy sunset reflected on the adobe roofs of a village in Pueblo at Dusk (1987) by Dan Namingha (Hopi-Tewa). Fonseca studied with LaPeña, and Namingha attended the IAIA in the sixties when Scholder taught there. Scholder’s The American Indian (1970) closes the exhibition with the depiction of an Indigenous man wrapped in an American flag, painted during the height of the American Indian Movement’s agitations for civil rights. Grimacing and dignified, the figure is a contradictory archetype for an American history of Native painting in the post-war period.

There are some regrettable omissions due to conflicting exhibition schedules; an Oscar Howe exhibition is forthcoming and a masterful touring T.C. Cannon retrospective recently closed. The curators also chose to exclude art from entire portions of the continent—notably the Northwest Coast—despite ample examples in the collection. Nonetheless, “Stretching the Canvas” is a remedial lesson in the multiple strands of modernist painting that are still missing from many museums. Anyone seeking such rich visual histories absent from the newly expanded Museum of Modern Art uptown, which has not included a single work by a Native American artist in an otherwise globally inclusive rehang, would be best advised to find them at the Smithsonian outpost on Bowling Green.

Kinzinger: Hutchinson’s Bombshell Testimony Is ‘Inspiring’ Others to Come Forward