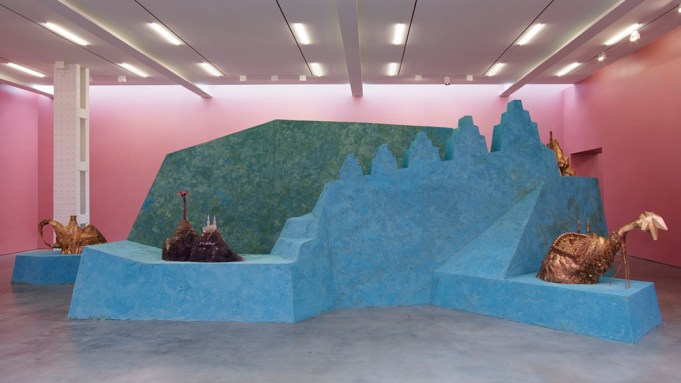 For Wael Shawky’s exhibition at Lisson, “The Gulf Project Camp,” the gallery’s walls were painted bubblegum pink and the main room was dominated by a mammoth sky-blue structure. What at first suggested the venue for a turbocharged gender-reveal party was in fact a lavish installation offering a deep dive into Middle Eastern history. The works on view (all 2019) related to Shawky’s forthcoming film series “The Gulf Project,” which, according to the exhibition materials, will explore the physical and economic development of the Arabian Gulf from the seventeenth century to today through the lives of its ruling families. The presentation cast extensive historical research through the lens of fantasy, recalling the projects for which Shawky is best known: the film trilogies “Al Araba al Madfuna” (2012–16), based on Egyptian writer Mohamed Mustagab’s phantasmagorical short stories of rural Egyptian life, and “Cabaret Crusades” (2010–15), which reconstructs the eponymous religious wars through puppetry.

The show felt like a stage set, with props and scenery in place but no actors to interact with them. It was theatrical and impotent at once—a fitting metaphor for the Gulf, where mimesis is elevated to a state policy (build copies of other places and they will come) and frustrated ambitions of the type exemplified by Dubai’s long-delayed Falconcity of Wonders, a massive real estate development with internationally themed neighborhoods and replicas of world monuments, are common. The aforementioned blue structure contributed greatly to the exhibition’s staginess. Serving as a pedestal for bronze sculptures depicting chimeric hybrids of architectural models and mythological creatures of a sort you might find beautifully illuminated in a medieval bestiary, it was an elaborate construction replete with crenellated walls, steps, and an alleyway.

Five stunning reliefs carved in wood and accented with metallic paint hung on the surrounding walls. They depict views of the Gulf region’s landscapes and palace life adapted from early modern sources, primarily Iranian and Indian miniatures. The largest, however, is based on an 1803 panoramic engraving by the Austrian orientalist Andreas Magnus Hunglinger that shows the inner compound of Mecca during the Hajj but without the worshippers who would usually throng this type of scene. Looming over the landscape in Shawky’s version is a curiously machinelike mash-up of a brontosaurus and the Loch Ness monster, a hybrid creature that makes several cameos in the works. According to the exhibition text, the relief was carved from wood that is “between 400 and 2,000 years old.” (The bombast is an extremely Gulf move.)

A suite of drawings in a back room, suggesting film storyboards, rendered key moments in the region’s genealogies of power in a similarly fantastical language. Drawing #5 depicts military helicopters awaiting a giant hamburger arriving by sea, echoing the arrival of sixteenth-century Portuguese ships seen in Drawing #2—a deft analogy of hard and soft power, colonists old and new. In Drawing #16, we see King Faisal of Saudi Arabia meeting Richard Nixon in 1971, inaugurating the cozy Saudi-US relationship that continues to the present day, their bodies blending in with their architectural surroundings.

We know that the transmission of history is arbitrary, constructed, and rife with mythmaking. But Shawky turns the fiction up to eleven, engineering a candy-colored historical topography for the Gulf that’s as realistic as Agrabah in Disney’s Aladdin. It’s particularly successful since the Gulf itself effaces its past, by way of hyperdevelopment, and has an outsize reputation that lends its own surrealist cast to the affair.