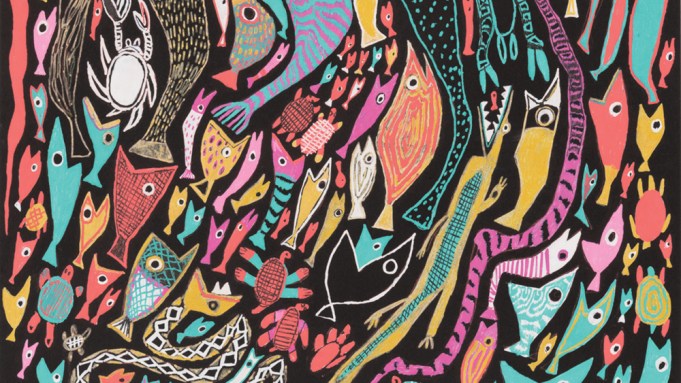 Using extruders, piping bags, and palette knives, Summer Wheat pushes acrylic paint through framed pieces of aluminum mesh, producing stippled images on the other side that appear to be tapestries. It is only once you bring your eyes close that the materials reveal themselves. Wheat’s technique, which she began developing four years ago (prior to which she painted on canvas), is completely novel. Several critics and Wheat herself have likened the final effect to pixelation, but there’s also something primordial about the craggy surfaces.

For the six large paintings and five notebook-size ink–and–colored pencil drawings exhibited in her latest show (all 2018), Wheat channeled mythological sources. In several cultures—Greco-Roman, Chinese, Japanese—the fish has been a significant symbol of abundance, prosperity, and fertility. Offering her own decidedly feminist take on this idea, Wheat depicts fisherwomen and marine life existing in a matriarchal aquaculture. The relationship between hunter and hunted here is peaceful, as suggested by the exhibition’s title, “Catch and Release,” which refers to a conservation practice in which caught fish are returned to the water.

Wheat paints in acid-bright colors, and her stylized figures are pretty wacky. Nevertheless, the overall mood of her work is usually solemn, even heroic. The show’s title painting portrays a mass of women, fish, animals, and foliage, their forms bending this way and that, as if they are underwater. A recumbent woman, her legs impossibly splayed, appears to have just birthed a baby. Another woman, depicted hanging upside down, reaches out as if to whisk this child into an embrace. Two additional female figures approach the mother with expressions of care. The work’s emphatic friezelike structure gives a grandeur to the scene, which ultimately, despite a degree of goofiness, commands our respect.

Mutual support and cooperation are also foregrounded in Heavy Lifting, in which a procession of women hauls the day’s catch in what seems to be a large basket or net. Though some of the figures are boldly outlined, most have difficult-to-decipher forms, and the general impression is that of a dynamic assortment of shapes. “The women are connected by geometric patterns that echo the psychological space of supporting one another,” Wheat said in a recent interview with Bomb magazine, referring to a work from an older series. That observation applies here as well.

The line between human and marine creature blurs in some individual portraits. In Fisher, for example, a curvaceous woman whose form recalls that of Neolithic fertility sculptures kneels with a large yellow fish in her hands. The suggestion is that both woman and fish symbolize the same life force. A similar but more complex conflation occurs in Fish Tears. This half-length frontal portrait, composed mostly of passionate shades of red, shows a sorrowful woman with a steady stream of golden fish-shaped tears running down her face. If fish represent value, then this woman’s grief is gold; a supposed female weakness—being overemotional—is reimagined as an asset.

Daily Release perhaps most eloquently conveys the central idea of the exhibition. Two sets of arms drop down from the top of the frame. Each tips fish from a jar into the sea. It is a scene that complicates the usual notion that humans are exploiters of, or at best dependent on, nature. Here, on the contrary, women are depicted as allowing natural life to thrive.

After Months of High Prices, the Cost of Chicken Is Finally on the Decline

Inside ICNCLST, the Creative Agency Behind the Most Exciting Artist-brand Collaborations

USA vs. Iran Live Stream: How to Watch The World Cup Game Online for Free

A Subtle Style Upgrade to an Everyday Jacket, Shearling Coats Are Our Go-To Every Winter