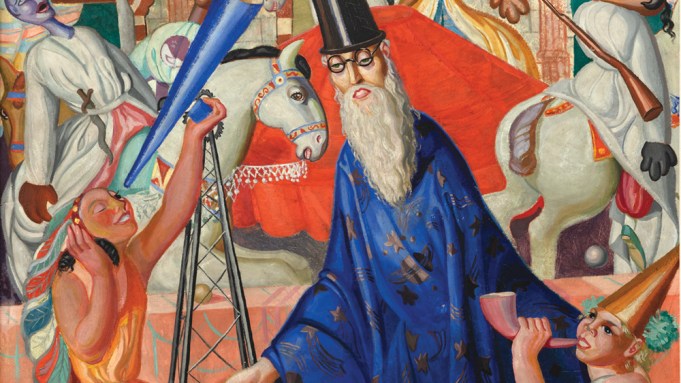 At the center of the Surrealist imagination stood women. Or, more precisely, “woman”: an idealized, eroticized figure created in the minds of men. No platonic ideal, she took instead the varying forms of artists’ and poets’ fantasies, though almost always operated in defiance of bourgeois propriety. Of abiding interest both to scholars and to the general public, then, is the prominent role that women painters, photographers, and novelists played in Surrealist circles in the movement’s epicenter, Paris, and on its ever-swelling margins. The subject found some incisive expositors beginning in the 1980s. Several women scholars began excavating Surrealism’s fraught sexual politics, which were riven with chauvinist prurience yet generative of new expressive modes of female subjectivity. Two exhibitions that opened in New York this fall featured artists who demonstrated just such modes. Ortuzar Projects held a small presentation of work by Maruja Mallo (1902–1995), while the Museum of Sex unveiled a show surveying the career of Leonor Fini (1907–1996). Both artists were endorsed by the “pope” of Surrealism, André Breton, yet neither courted the movement’s imprimatur. Instead, these independent women forged eccentric paths unbeholden to male-imposed dogma.

Unfamiliar on these shores except to select art historians and Hispanists, Mallo’s work has not been seen in New York since a 1948 show at the Carroll Carstairs Gallery. One of Spain’s most prominent painters between the World Wars, Mallo, like many of her modernist peers, began her career in the academy. While partaking in a fellowship at Madrid’s Academia de Bellas Artes de San Fernando in the early 1920s, she met fellow student Salvador Dalí, who introduced her to the filmmaker Luis Buñuel and the poet Rafael Alberti. Her work is most often associated with the so-called Generation of ’27: a contingent of poets, writers, and artists to which these figures belonged. The group was attuned to the latest European avant-garde tendencies, chief among which was the recently founded Surrealist movement, whose strategies came to shape Mallo’s work.

Mallo distinguished herself by the late 1920s with several large-scale oil paintings centered on the vernacular culture of Madrid’s popular festivals—events where class, gender, and even identity itself could be temporarily exchanged. The best known of these paintings is La Verbena (The Fair, 1927), whose fractured Cubist- and collage-inspired composition revolves around two brash female figures striding toward a cluster of sailors, past outsize effigies of the Virgin Mary, a one-eyed giant, and a member of the guardia civil. La Verbena was not included in the Ortuzar Projects show, but a similar kaleidoscopic fair scene was found in El Mago/Pim Pam Pum (The Magician/Pim Pam Pum, 1926). This work shows a magician gathering a child to his blue robes, while in the background loll the heads of Moorish characters—perhaps figures in the carvinal shooting game referred to in the title. Even more patently steeped in Surrealist motifs and strategies, Escaparate (Maniquís) (Shopwindow [Mannequins], 1928), also on view in the show, packs a melee of mannequin parts into a storefront, taking up the Surrealist preoccupation with human doppelgängers. The image’s quasi-scenographic premise anticipates Mallo’s subsequent set designs of the mid-1930s, photographs of which were included in the exhibition.

Mallo’s Surrealist initiation, like Dalí’s, occurred in Paris. Residing in the city with a grant to study stage design, she carried with her a number of her canvases, including works featuring the increasingly somber and morbid imagery to which she had turned by the late 1920s. Familiar in Surrealist circles since her arrival in the French capital, Mallo cemented the group’s interest in her work with a 1932 exhibition at the Galerie Pierre (site of the Surrealists’ first show, in 1925). Breton summarily bought one of her paintings, Espantapájaros (Scarecrow, 1930). The Ortuzar exhibition included a 1933 work from Mallo’s “Arquitectura vegetal” (Vegetal Architecture) series, which replaces the vivid bodies of her previous paintings with stark scenes of bones, fossils, or excrement rendered in shades of gray and brown. These compositions evoke an unsettling world that—in light of the growing pains Spain experienced in its transition from dictatorship to democracy—takes on an eerily prophetic air.

Upon the defeat, in 1939, of the Spanish republic by Franco’s insurgent army, Mallo sought refuge in Uruguay and Buenos Aires. Abroad, she pushed her work beyond the parameters of Surrealism. Ortuzar exhibited three paintings from 1942 that offer fanciful portrayals of seashells, flowers, and algae crisply delineated in bright pastels. Each is titled Naturaleza viva, a play on the Spanish term for “still life” (naturaleza muerta). El Racimo de uvas (Bunch of Grapes, 1944), plainly evokes the womb and its proverbial fruit. While proficient in an academic vein (as demonstrated in a number of figure studies on display), Mallo appears to have been most at ease when stylizing the natural world—or, rather, when drawing out the peculiarities contained in its appearances.

Decades before Mallo fled Europe for Argentina, the painter Leonor Fini moved in the opposite direction: from her native Buenos Aires to her mother’s hometown, Trieste, Italy. As a child in the 1910s, while her divorced parents carried out bitter battles for custody of her, Fini was evidently made to wear various disguises, including boys’ clothing—performing a gender masquerade that has various echoes in her imagery. Coming of age as a painter in 1920s Italy brought her into contact with Giorgio de Chirico, whose Metaphysical images formed a touchstone for Surrealist efforts in oil painting. She distilled lessons both from de Chirico’s own canvases and from their assimilation by artists like Dalí and Max Ernst. In histories of the female painters associated with Surrealism, Fini looms large. Yet she resisted the movement’s strictures, exploiting its aesthetic strategies while refusing official inclusion (her support for and by Georges Bataille and Jean Cocteau—personae non gratae in Breton’s circle—further distanced her from this central authority).

The first major retrospective of her work in the United States, “Leonor Fini: Theatre of Desire, 1930–1990” found a seemingly unlikely home at the Museum of Sex, where other floors displayed vintage vibrators and prewar condoms. Yet any doubts as to the seriousness and complexity of the show were dispelled upon walking into its galleries, where one found a well-paced presentation of the artist’s six-decade career, which spanned painting, film, photography, and furniture, set, and costume design. Over and above any aesthetic medium, however, it was Fini’s performative persona that recommended her work to this venue. A self-declared libertine, she spent most of her adulthood living simultaneously with two male lovers—the Italian count Stanislao Lepri and the Polish writer Konstanty Jeleński. Fini turned the tables on Surrealist machismo. Rather than simply depict strong women—who abound in her work—she rendered various men as objects of the female gaze, as in two paintings from 1942: L’Alcôve (The Alcove), which features filmmaker Nikos Papatakis in a seductively dishabille manner, and Femme assise sur un homme nu (Woman Seated on a Naked Man).

Fini was one of the most photographed artists in Paris during the 1930s and ’40s, donning all manner of costumes for Cartier-Bresson, Lee Miller, Dora Maar, and especially André Ostier, whose images of Fini wearing various masks evidence her love of costumes, cross-dressing, and a purposeful conflation of art and life. Fini is no passive object in these images. She is an agent of her own appearance. In two paintings from around 1938, each titled Femme en armure (Woman in Armor), Fini offered views of a young woman outfitted in a metal breastplate and feathered headdress—accoutrements the artist owned herself and routinely wore in photographs. A legendary 1945 photograph of Maruja Mallo covered head-to-toe in seaweed—appearing like a creature from the deep—makes for a poignant comparison, one that shows how central the act of self-fashioning was to both artists.

It is nevertheless painting with which Fini remains most widely associated. With no training other than some informal mentoring, she arrived in Paris around the same time as Mallo (if their paths crossed, not much has been said of the encounter). Though it was her physical presence that first struck Breton (he was evidently taken with her pink socks at a café), Fini quickly proved herself as an artist: she would not be simply a muse. Her first solo show, at the Galerie Bonjean in 1932, confirmed her importance for the Surrealist group, and she subsequently exhibited with them at major venues, from London’s “International Surrealist Exhibition” to the Museum of Modern Art’s landmark “Fantastic Art, Dada and Surrealism,” both of which took place in 1936. That same year, de Chirico penned a short piece on Fini, hailing “the female troubadours with bobbed hair” and “the female minstrels with plumed bonnets”—an homage to the women who populate her canvases.

As did several of her peers—particularly Leonora Carrington and Remedios Varo—Fini extended her conception of the feminine to both the natural world and the preternatural phenomena of magic and alchemy. “I like to feel myself in a state of metamorphosis like certain animals and plants,” she once remarked. Her various portraits of herself with—or as—animals evidence this identification. Les Sorcières (The Witches, 1959) transmogrifies a motif from Goya’s paintings into a swirling vortex of female strength. To be sure, Fini’s morbidity occasionally bleeds into kitschy excess, as in L’amour sans condition (Love without Conditions, 1958), which might have illustrated a pulp sci-fi novel. By contrast, Chimère du soir (Evening Chimera, 1961) suggests an oblique dialogue with Abstract Expressionism, attesting to a certain aesthetic adaptability. Such shifts marked the last decades in Fini’s artistic trajectory. In a short time, she could put forth, for instance, the airy pastel idyll of Les Baigneuses (The Bathers, 1972) and the creepy precision of Le carrefour d’Hécate (Hecate’s Crossroads, 1977–78), in which five women appear frozen in place along some unidentified thoroughfare. Indeed, in one of the various films on which Fini collaborated, projected in the show’s last gallery, she is seen taking off a mask only to reveal a further disguise.

Wagyu Wonderland: Inside the NYC Restaurant Where the World’s Finest Beef Stars in Every Dish

For Holiday Travel Season, These Are The Best Face Masks We’re Still Wearing On Long Flights