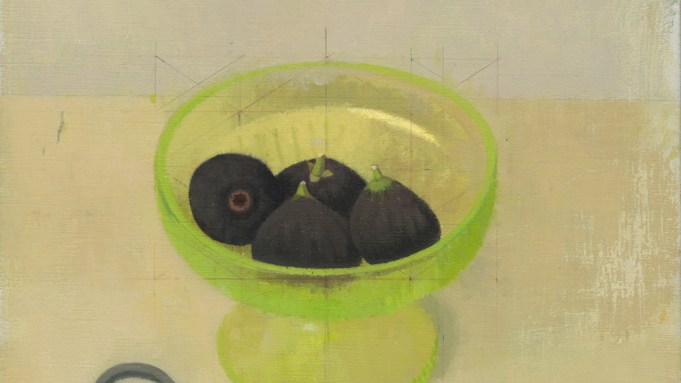 The impact of Susan Jane Walp’s still lifes defies their diminutive scale. In her paintings—fifteen of which were on view at Tibor de Nagy, all dimensions measuring less than eleven inches—she portrays domestic objects, patterned fabrics, and luscious fruit in rigorously balanced compositions whose rich, chalky tones suggest those of Roman frescoes. Born in Allentown, Pennsylvania, in 1949, Walp grew up immersed in Protestantism. The ordered painting approach she has been committed to for the past four decades reflects a tradition of American pragmatism that privileges discipline, attention, and craft. It also evinces a connection to painters such as Edwin Dickinson and Charles Hawthorne, who combined keen observation with an atmospheric, at times abstracted, sense of space.

Walp shows great dexterity in giving form to the variables that come into play in visual perception. Among her greatest feats is her ability to contend with shifting light conditions. Each of her still lifes appears illuminated by its own distinctive light, ranging from diffuse and ethereal to dim and sedate. In Four Figs, Two Swans, and Pair of Scissors (2017), a lime-green parfait dish seems to glow, as if bathed in early morning sun, its slick texture providing an almost tangible contrast to the rough skin of the four purple figs cradled within. In Pummelo with Spoon (2014), the fleshy rind of the fruit contains a multitude of pastel tones that suggest dappled light. The rind’s outermost layer is painted in a bright yellow that gains intensity as it travels around the fruit’s circumference—pulling the viewer’s gaze into the pictorial space.

Several paintings include depictions of xeroxed pages, photographs, or other printed matter: Blood Orange with Photocopy, Knife, Red Cup (2014–18) shows two halves of a sliced orange resting atop a wrinkled photograph of three figures, obscuring all but their legs; tucked amid objects in Black Faliscan Vessel, Bread, Red Cup, Old Brick, Napkin (2017–19) is a snapshot-size image of a woman. Walp’s portrayal of such reproductions can be read as a wry comment on understandings of the still life genre—a reminder that even the most faithfully rendered painting is never a strict copy of what it depicts. Walp underscores this fact by setting the immaculately detailed objects in her still lifes against minimal backgrounds on which she often leaves visible the plot lines she used to map out the compositions. In Blueberries in Red Cup, Paper Bag, Knife, Cork (2018–19), for instance, a faint white grid peeking out from beneath the paint frames a cup of berries, serving as a subtle record of the complex process by which Walp organizes phenomenological reality into pictorial space.

The modesty of Walp’s work is deceptive: her paintings demand the viewer’s complete attention in order to reveal their nuances. At a moment when attention is currency, this is no small request. But her paintings reward those who take the time to look at them closely and deeply, their quiet stillness offering a moment of contemplative sanctuary.