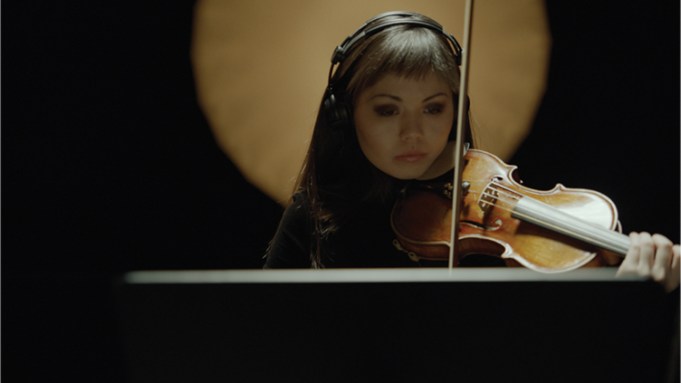 It’s hard to imagine a more disconsolate musical pairing than the two works that Susan Philipsz took as the source materials for the pieces in this exhibition. The Turner Prize–winning artist’s film A Single Voice (2017) centers on the performance of a violin solo derived from Karl-Birger Blomdahl’s 1959 opera, Aniara. Based on Harry Martinson’s epic sci-fi poem of the same name, Aniara concerns a group of interplanetary travelers who, after escaping man-made ecological disaster on Earth, are knocked off course on their way to Mars and left hurtling aimlessly through space on their ship, the Aniara. Philipsz films musician Leila Akhmetova seated in front of sheet music and a computer screen. The camera orbits her like a satellite. Between periods of silence, violin music can be heard playing from the dozen speakers installed around the perimeter of the gallery, while Akhmetova herself waits, poised, wearing headphones and holding her instrument. At certain moments, she fills in a few select notes from these musical passages. A sense of drama arises from observing her and anticipating the moment she will suddenly put bow to string. If her performance is spellbindingly self-assured, the music is filled with a sense of dread and alarm. As the press release informs us, the monotones she plays in one section of the performance were intended by Blomdahl as a reference to the Morse code for “Aniara SOS Aniara.”

The second part of the exhibition comprised Philipsz’s audio installation Seven Tears (2017) and a series of related paintings. These works are based on English composer John Dowland’s Lachrimae (1604), which consists mainly of seven lute-and-violin compositions titled after types of tears (“Old Tears,” “Sighing Tears,” “Sad Tears,” “A Lover’s Tears,” etc.). In Philipsz’s work, Dowland’s emotionally rich music is stripped down to its bare bones. Scratchy recordings of individual notes—created by ringing the rims of wineglasses—play in various sequences from seven turntables. While Dowland’s music teeters on the edge of morose sentimentality (and topples headlong into it in his related work, “Flow, My Tears”), Philipsz’s interpretation is something else entirely. These are tears for a world that no longer finds catharsis in crying.

A Single Voice was shown on the gallery’s ground level, while the Seven Tears works were located upstairs. Each audio piece could be heard faintly in the other’s space. This seepage made it easy to get one’s thematic signals crossed. The paintings accompanying Seven Tears were created by soaking dark sea-green screen prints in salt water, which was allowed to crystallize into patterns on the surfaces of the works. Given the message of distress emanating from A Single Voice downstairs, these paintings brought to mind thoughts of environmental catastrophe, seeming to hark back to that moment in recent history when Hurricane Sandy’s massive storm surge caused severe flooding in establishments across New York’s Chelsea neighborhood, Bonakdar among them. Standing among the turntables in Seven Tears, I heard not only the strains of A Single Voice but also howling wind overheard and the construction sounds from nearby luxury building projects. Amid the SOS notes and the evocations of sorrowful sobs, a different refrain was discernible: Après nous, le deluge.

The Best Whiskey, Cocktail and Booze Books To Read Now