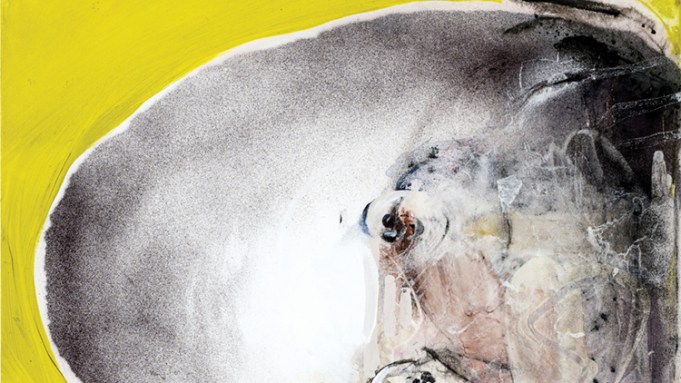 After thirty years of exhibiting her work, language has failed Suzanne McClelland. Or, more accurately, she has failed language, having banished text from her latest series of paintings, “Mute” (2019), the subject of her most recent show. Those who have followed McClelland’s career are used to literally reading her abstractions; in them, she has wielded bits of text, ranging from innocuous prepositions to conversational fragments to absurd ciphers and even obscenities, as composition-building gestures. Here, by contrast, text exists only in the titles, each a letter of the alphabet. From the bottoms of the twenty-six same-size canvases, monolithic forms that vaguely suggest heads, creatures, outcroppings, or shambling silhouettes rise against mainly monochromatic grounds. Made by applying dry and wet oil pigments, mica, sand, and glitter to canvases laid flat, and then tilting the canvases so that the medium flowed, these forms have dense, viscous, cracked surfaces that sparkle in the light. Up close, you can see many colors buried in the thick flows, though the paintings wear their chroma subtly. Spaced evenly on the walls of the main gallery, the works felt like sentinels, each with a distinct personality and a quality of interior life.

Mute O features one of the headlike forms: in this case, a glowering black mound with four eyes and an angry little yellow mouth that looks as though it is blowing two smoke rings, one a tiny orange dot and the other a purple circlet. Pink glitter in one white eye adds to the angry feeling, but a cartoonish purple strand curling up from the form into delicate yellow and orange washes lends humor. There is more than a whiff of Guston’s late mordancy in these paintings—in Mute Q, for example, a “head” bounded by a narrow white band to separate it from a sickly pea-green ground lies on its side, with an ear-ish detail at the top. A number of works register as geological, due not only to their grainy materials but also to their compositions. Mute P has a volcanic feeling: an ochre-colored triangular formation pressed with gold glitter opens slightly at the top to offer a glimpse of molten cobalt, pink, and purple, while a smattering of black circles tumbles down the front, as if an eruption has occurred. Mute I is a promontory; Mute K, a geode, its surface gritty and its center splitting open to reveal hot pink within. The glittering black-and-silver form in Mute V resembles a silhouetted figure that has turned its back to exit; thick white paint at the left spreads awkwardly across bumps of material, suggesting a bedsheet laid over items left on the bed. Consistently, the paintings seem to hide a smoldering intensity beneath lapidary surfaces.

McClelland has always addressed political and feminist content through her chosen idiom of abstraction, and these latest works are no exception. Indeed, “Mute” may be her most trenchant social critique to date. Her decision to create wordless paintings in this phase of her career, as she mentioned in a conversation with me, has much to do with a sense that language has become increasingly futile in an era of volubility and failed communication. In this series, she shows the power in refusing to add another voice to the din.

This article appears under the title “Suzanne McClelland” in the February 2020 issue, pp. 85–86.