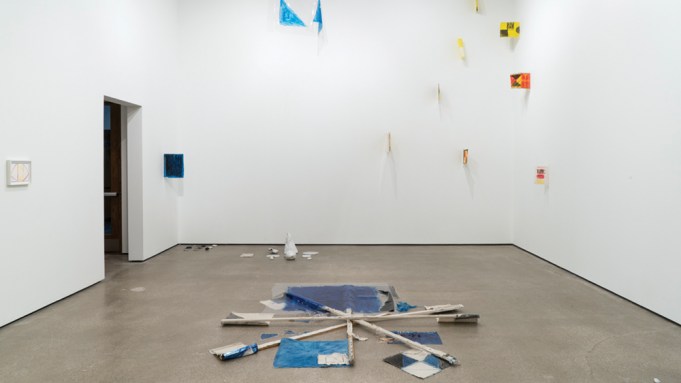 Upon entering Suzanne Silver’s exhibition at the Columbus College of Art & Design’s Beeler Gallery, visitors encountered a statement in vinyl lettering. warning, it began, before providing customary information about the artist and the show. This call for caution, incongruously headlining a didactic statement, introduced a recurrent theme of Silver’s work: her drawings and objects, which could easily be mistaken for playful collages and assemblages, are attempts to find an expressive vocabulary legible in times
of war and trauma.

The wall text was one of the few instances where written words appeared in the show (which was titled “Codes and Contingencies”), but elements of symbolic systems were everywhere. Morse code, maritime semaphore signals, and Braille were among the languages that Silver referred to in the exhibition, which was conceived as a dynamic, site-specific installation. Over the course of the show’s seven-week run, the artist reconfigured the collected works four times (“Iterations 1–4”), choosing from an inventory of materials she stored on shelves in a neighboring hallway when they weren’t needed in the gallery.

Several “Iterations” included a group of drawings featuring circles on modulating color fields that evoked Braille. These pieces sat at the boundary between linguistic communication and visual abstraction. Double-sided oil pastel drawings were installed in clusters around the gallery, generally below or high above eye level. Many extended from the wall on wooden dowels, underscoring their resemblance to pennants or naval signal flags. Stiffened with shellac, the semitransparent paper allowed the patterns on both sides to appear. Initially, these compositions looked like quick doodles or provisional blueprints, but closer study revealed recurrent geometric patterns and colors, as if the pieces employed a cryptic language.

On the floor for each “Iteration,” Silver arranged scraps of cloth, felt, vinyl, metal, and wood, as well as ceramic fragments and other found objects. One floor piece in “Iteration #1” comprised a group of small objects arranged neatly in a square. At its center was an asterisk shape formed by brown, white, and black metal strips, the symbol surrounded by additional pieces of the same materials. The work appeared to utilize cast-off items from works on view elsewhere in the galleries, incorporating fragments of the signal flags and segments of cloth embroidered with the phrases GOOD GOVERNMENT and BAD GOVERNMENT.

In other “Iterations,” Silver’s improvisatory aesthetic was linked directly to conditions of distress or catastrophe. “Iteration #2,” for instance, featured a floor piece in which foil and wood elements formed the pattern—three dots, three dashes, three dots—that spells S.O.S. in Morse code. In “Iteration #3,” similar materials spelled yx/yv, which conveys “War is here/Peace will come” in an international signaling language developed in the early twentieth century. Such works seemed to be constructed hastily from whatever materials happened to be at hand at the time of an emergency.

How can messages of distress be broadcast without contributing to a spectacle of plight and suffering? Can an abstract work render a cry for help? Silver offers affirmative answers to these questions. At their most powerful, collages and assemblages borrow from existing visual communication systems to reveal hidden images and express complex memories and emotions. Art can be stubborn and mystifying, lacking the contact and conditions of the everyday. Silver has found her distinctive voice by employing quotidian detritus and the vocabularies of common modes of transmission to impart messages of fear and resistance.