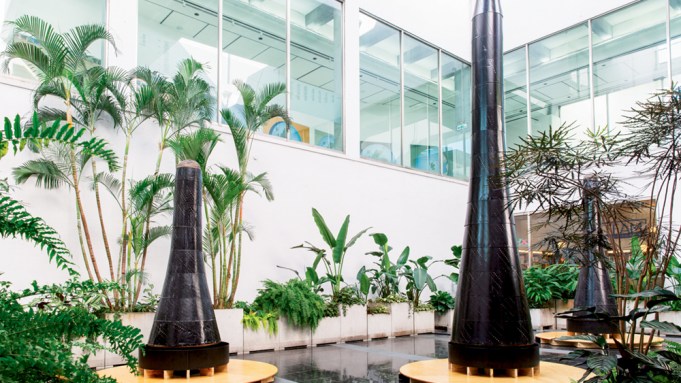 “Post-Nature—A Museum as an Ecosystem,” the eleventh Taipei Biennial, promotes an expansive notion of ecology that encompasses genetically engineered and cybernetic entities and an art world motivated by social activism and institutional critique. The show’s forty-one participants, hailing from nineteen countries, include Taiwanese and international artists as well various scientific researchers, policy advocates, documentarians, and public educators. Curators Mali Wu, head of the Graduate Institute of Interdisciplinary Art at National Kaohsiung Normal University in Taiwan, and Francesco Manacorda, artistic director of the V-A-C Foundation in Venice, thus mix studio-based art with films, television segments, lectures, and symposia. Their goal, as stated on the biennial’s website and in various interviews, is to integrate artistic and civic forms of cultural production. In doing so, they turned the museum into an ecosystem of ecosystems and encouraged viewers to treat ecological awareness as “a consistent and common way of thinking.”

The works providing active ecosystems include Danish artist Tue Greenfort’s sculptural mushroom cultivators and Taiwan-based Chen Chu-Yin’s terrarium of light-activated robotic insects. Argentinian artist Vivian Suter’s Lala Mountain · Panajachel (2018) comprises several unstretched abstract paintings suspended across a corridor. Previously left out in the weather of her Guatemalan highland home, the works incorporate mold thriving on the fish-glue Suter used as a binding agent. Mycelium Network Society (2018), by an international collaborative of the same name, is a room-size molecular model of the fungal toxin Patulin. Each “atom” houses fungi and radio transmitters that convert the growth of the organism into sound. On opening night musicians improvised with the fungi.

Humanity’s will to dominate nature—often by extracting and redistributing resources—is reflected in a number of works. Allan Sekula’s photo-and-text project “Fish Story” (1989–95) probes the history and consequences of containerization, while German artist Ingo Günther’s “World Processor” (1988–) offers multiple globes displaying planetary data about energy consumption, rainfall, and wildlife migration routes. Lucy Davis presents woodcuts, photographs, and animated film segments from her project “Together Again (Wood:Cut),” 2008–, which traces wood samples from household items found discarded in her native Singapore back to their sources in forests across South Asia, thus highlighting the intricate interrelationship of domestic furnishings, commerce, and arboreal life. Weed Day by Taiwanese educator, artist, and activist Zo Lin, who engages visitors in exploring the history of tea in Taiwan by teaching them to collect and steep all manner of plant life, favors a more deferential relationship between humanity and its terrestrial home. This impulse is most consistently displayed in The Age of Awakening (2018), a film about pioneering environmentalists by director Ke Chin-Yuan, whose weekly “Our Island” TV series has chronicled Taiwan’s ecological issues for two decades.

The biennial ends in the basement with the show’s most intimate work: Hong Kong–based Zheng Bo’s video Pteridophilia (2016), which follows a group of naked young men as they search for, caress, kiss, lick, and ultimately have sex with wild ferns. Crucial to the post-nature paradigm is the decentering of human desire, rendering homo sapiens not masters of the global ecosystem but simply one more striving life-form among countless others with equal moral and ontological standing. Pteridophilia suggests that to be truly post-nature is to understand that not only are our ecological fates united, but our pleasures are too.