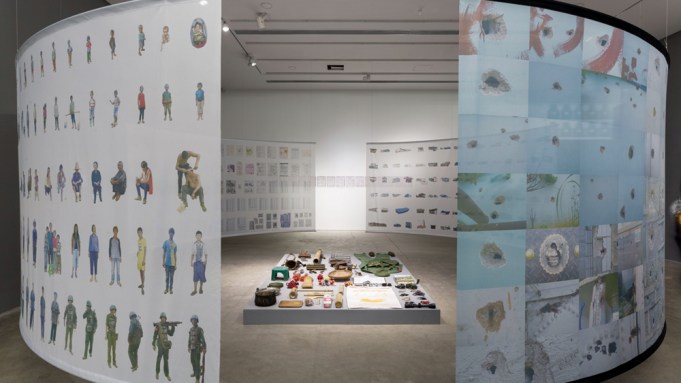 Yin Xiuzhen’s Trojan (2016–17), a nearly nineteen-foot-tall sculpture of a woman bent over in the brace position in an airplane seat, could serve as a wry icon for the mental state of many Chinese artists today—suspended in midair between two cultures, one global, the other adamantly national. The work was on view at Pace as part of Gallery Weekend Beijing (GWBJ), which was held in March and encompassed twenty-two venues in the city’s two major contemporary art districts, 798 (a former factory complex) and Caochangdi (once a peripheral “village” named for its grasslands). Extended to a full week in this, its second edition, the event—headed by Amber Wang, former director of the Museum of Contemporary Arts, Singapore—was clearly timed to snare international patrons on their way to or from Art Basel Hong Kong.

In keeping with this internationalism, Western works were shown at many of the participating spaces: paintings by five German artists at Boers-Li, installations and videos by Carsten Höller at Galleria Continua, videos by Paul McCarthy at M Woods, steel sculptures by Richard Deacon at Beijing Commune, bright mural-size paintings (some representational, some abstract) and films by Sarah Morris at the Ullens Center for Contemporary Art. Other venues offered an even-handed mix, such as the matchup of abstract painters John McLean (b. 1939, United Kingdom) and Wang Jian (b. 1972, China) at PIFO Gallery.

Group exhibitions emphasized new media and current critical issues. At Hyundai Motorstudio, “A Precarious Universe” comprised works exploring the theme of physical and social mobility, such as Dachal Choi’s large color photographs of young people who gig themselves out on an hourly basis through social media. “Genders Engender,” at Taikang Space, presented fashionably casual installations and texts scrutinizing contemporary female identity: What is it? How is it constructed? Who can play?

Yet GWBJ’s cosmopolitanism is only half the story. The current art scene in the People’s Republic is a house deeply, though so far peacefully, divided. Shifting, moment to moment, between the two halves of this bicameral culture is more taxing than the fourteen-hour flight from New York, more disconcerting than the noon-is-midnight jetlag.

At a dinner and studio visit unconnected with GWBJ, the party secretary of the Chinese Artists Association, Xu Li, told me that membership in this elite group of approximately seven thousand is open only to artists who have won prizes in the official salon exhibitions. With acceptance comes the likelihood of lucrative commissions, subsidized studio space, and a highly esteemed teaching position. Many collectors will buy only from CAA-certified artists. The transnational Chinese art-stars that foreigners regard as independent (Xu Bing, Cai Guo-Qiang, etc.) are in fact association members, though they may not highlight that credential abroad. Favored practices include calligraphy, landscapes, caricature, bird and flower studies, and academic (an honorific term in China) still-life painting and figuration. Animating the organization, whose “true Chinese” aesthetic is widely endorsed by the public, are the dual convictions that contemporary experimental art is inept and tasteless, and that, rather than doggedly follow Western trends, Chinese artists should strive to preserve the country’s timeless cultural essence and refined artistic skills. All the while cunningly assimilating a modern inflection, of course. “Let the past serve the present,” as Mao Zedong advocated, “and foreign things serve China.”

This doctrine explicitly shaped the Chinese pavilion at the 2017 Venice Biennale. The exhibition there was curated by the often experimental artist/professor Qiu Zhijie but displayed, in accordance with current government policy, ink painting, cut-paper works, embroidery, and shadow puppetry. Such neo-traditionalism now affects many formerly radical midcareer artists and ambitious newcomers alike, along with numerous young curators and critics weaned on experimentalism but lately conscience-bound to weigh the “Chinese-ness” of all they do. The return of the repressed can be fierce when a country has seen its cultural legacy internally squelched for nearly thirty years (1949–76, under Mao) and threatened thereafter with a friendly inundation of foreign products, styles, and ideas. Even GWBJ bore traces of the reclamation impulse, which has burgeoned since Xi Jinping took power five years ago.

At Ink Studio, Zheng Chongbin presented blocky black-and-white abstractions, two-dimensional and sculptural, of a quasi-Western variety. As the 2013 show “Ink Art: Past as Present in Contemporary China” at the Metropolitan Museum in New York demonstrated, the term “new ink” can be applied to virtually any recent artwork that employs so much as a single dab of China’s most revered traditional medium—or none at all, if a given sculpture, video, photograph, oil painting, or performance can be construed as reflecting the “spirit” of the Chinese old masters. Thus, work like Zheng’s—which dizzyingly echoes Pollock, Tobey, and Kline echoing classic chi-driven Eastern influences—adds a tinge of round-robin globalism to today’s massive resurgence of nativist forms and sentiments in the PRC.

Even Galerie Urs Meile, long a bastion of avant-garde work both Chinese and foreign, sometimes defers to the now prevailing temperament, as it did with its Shao Fan exhibition, which featured the artist’s stylized wooden sculptures that allude to antique Chinese furniture, and his spooky-funny animal portraits in ink on superimposed layers of rice paper.

Zhang Yue’s solo show at Gallery Yang was chosen as the best presentation at GWBJ. The sprawling installation focused on gun use, private and military, a topic that the artist—who spent four years in prison for killing a man in a fight—has been researching since 2013. Zhang interviewed rifle-range enthusiasts, criminals, cops, soldiers, and refugees, commemorating their experiences with paper targets, competition tally sheets, old gun permits, maps, diagrams, and other ephemera. For citizens of China, who are not allowed to possess private firearms (except for the tightly regulated purpose of hunting), the effect must have been startling. For an American, not so much. Any single table at a US cash-and-carry gun show would, so to speak, blow Zhang’s work away—with the glamour of real weaponry and its portent of breaking-news carnage.

That cultural contrast was yet another reminder of the importance of context. Theoretically, it may be easy to dismiss Chinese artistic conservatism out of hand. But is it prudent, or intellectually valid, to do so when the PRC’s neo-traditionalism represents the majority taste of one fifth of humanity, the commercial core of the world’s second-largest art market, the cultural policy of Asia’s ascendant geopolitical power, and the persistent “other” frame of reference for even the hippest young Chinese artists and critics? The times don’t always change in the manner we wish.

Yin Xiuzhen’s Trojan figure, braced for in-flight turbulence or an emergency landing, shared Pace’s galleries with Xiao Yu’s minimal, elegantly bent bamboo works—an exercise in formal virtuosity by an artist once notorious, two decades ago during the emergence of China’s avant-garde, for monstrous hybrid creatures (a winged rabbit, a fetus-headed bird) subtly stitched together and floating in formaldehyde. Those wild-and-woolly days are clearly past. Tellingly, Yin’s second major installation in the show was a field of dried weeds and grasses “growing” out of a bed of concrete—a sardonic metaphor, perhaps, for the age of precarity.

Still, her giant youthful avatar remains in transit. The passenger’s bumpy, uncertain journey is a reminder that the formerly dominant schema of successive artistic problem-solving—a cutting edge, irreversible “progress” toward a single teleological end—was always too linear and too simplistic. Our time requires a more complex navigational math—one that accounts for stops and starts, ruptures and recuperations, parallelisms, fluid dynamics, convergences, and myriad cycles and recyclings.