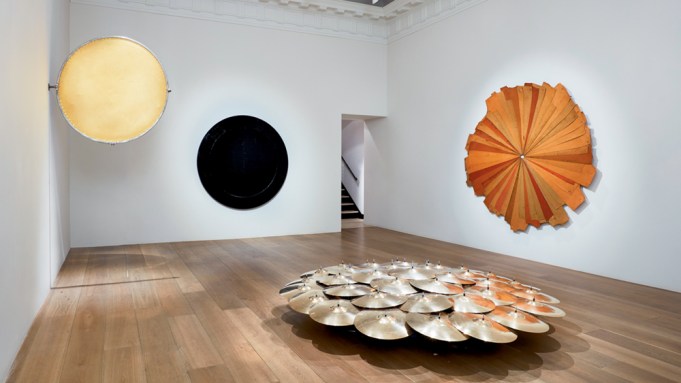 In a 2013 interview for Bomb magazine’s Oral History Project, which documents the life stories of New York’s African American artists, Terry Adkins, speaking of his early sculptural practice, remarked that the bargain materials he was buying in bulk from the junkyard in the 1980s “had to identity themselves” once he got them back to the studio. Adkins’s curious use of “identity” as a verb is indicative of his artistic process in general, in which he consistently challenged the forms and functions of the materials he employed. In his sculptures, the artist, who died in 2014 at the age of fifty-nine, sought to carry out a process he called “potential disclosure,” whereby the dormant life in inanimate objects could be revealed.

“Terry Adkins: The Smooth, the Cut, and the Assembled” brought together seventeen works dating from 1986 to 2013. Guest-curated by conceptual artist Charles Gaines, Adkins’s friend and sometime collaborator, the installation prioritized formal affinities and conceptual linkages. Works on the gallery’s first floor bore circular forms and allusions to music. A metal hoop stretched with fabric and mounted perpendicular to the wall, Synapse (1992), had a drumlike quality, its percussive potential underscored by a nearby work, Horus (1986), that comprised a rawhide circle displaying what appeared to be the impression of a mallet. A mound of cymbals, Native Son (Circus), 2006/15, hovered just above the floor and erupted in cacophonous blasts at predetermined but irregular intervals.

Adkins often abstractly referred to historical and cultural figures from the African diaspora in his work. Columbia (2007), for instance, is a circular piece of wood painted with as many layers of black enamel as LPs that blues singer Bessie Smith released on Columbia Records, while Bessie Smith Head, Red (2007) is a blood-red blown-glass sculpture whose balloonlike bulges evoke the form of a head and seem poised to deflate like lungs.

Upstairs, the presentation focused on the theme of doubling, showing how Adkins’s works not only echo one another but also contain echoes within themselves. Akhenaten (2013) features two plaster busts of the eponymous Egyptian pharaoh staring at each other from opposite ends of a horizontal vitrine. In Darkwater Record (2003–08), a bust of Mao Zedong sits atop a stack of cassette players that each bear two audio meters whose needles jump around to the shifting cadence of W.E.B. Du Bois delivering the speech “Socialism and the American Negro.” Yet the speech is inaudible, as no speakers are plugged into the tape decks. The work demonstrates how Adkins wanted to tune his viewers in to alternate histories and to a perceptive realm that might lurk just below everyday experience.

The exhibition was handsome, but at times almost aseptic, without much attention given to Adkins’s performances, such as his efforts with the Lone Wolf Recital Corps, which he founded in Zurich in 1986. Two five-and-a-half-foot saws were encased in a wall-mounted acrylic box like relics, for instance, and it was left to a short video clip playing on a small monitor in the stairwell to show that they were used to cut a block of ice in a performance work, Firmament, that Adkins staged at the Bronx River Art Center in 2005. Rather than vitrine-bound sculptures, the objects were meant to be expressive tools activated through use. The performative and collaborative sensibility that animated so much of Adkins’s work felt, unfortunately, just beyond the show’s reach.