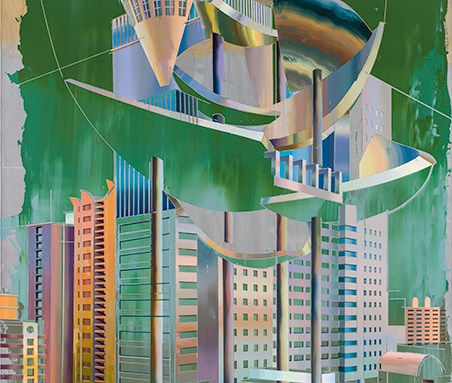 The twelfth edition of the Taipei Biennial, “You and I Don’t Live on the Same Planet,” co-organized by French philosopher Bruno Latour and Paris-based curator Martin Guinard, reflects the fracturing of our global imaginary in the face of accelerating climate change. Drawing on the work of numerous scientists and other experts, the duo offers four curatorial sections that represent, in effect, four types of people: those who maintain their faith in globalization; those who want to retreat into national borders; those who are building bunkers or absconding to Mars; and finally, those who struggle to invent new forms of sustainable living on Earth. Together, the works by fifty-seven participants from more than twenty countries, on view through March 14 at the Taipei Fine Arts Museum, thus present four competing futures for our planet.

Some of the World's Biggest Galleries and Museums Rallied to Preserve 200,000 Acres of Rainforest in Peru

The artists on Planet Globalization, as Latour and Guinard call the first section, try to render visible the abstract notion of a worldwide economic system and culture. The Los Angeles-based design collective MILLIØNS, for example, has compiled an analysis tracing the global supply chains behind Mies van der Rohe’s Seagram Building in Manhattan. Other contributors employ a globalized aesthetic, such as mainland Chinese artist Cui Jie, who offers hyperkinetic paintings of postmodern architecture, and Taiwan’s Huang Hai-hsin, whose cartoonish paintings and drawings capture crowded commercial activities or, as in the case of After Art Basel (2020), their sobering aftermath. In a collaborative installation, two French contributors, Franck Leibovici, a poet and artist, and Julien Seroussi, a former analyst at the International Criminal Court, present ICC documentation of the 2003 Bogoro village massacre in the Democratic Republic of Congo. Visitors are invited to use magnet boards to rearrange the papers, thereby extracting their own narrative of the event, in which some 200 civilians were slaughtered, and their own war-crimes dossiers. Mika Rottenberg’s video Cosmic Generator (AP), 2017, imagines a wormhole between a Chinese restaurant in Mexicali and a wholesale plastics store in China, replicating the ease of movement of goods and ideas in which the globe-trotting, New York-based, Argentine-Israeli artist herself partakes.

The exhibition unfortunately falters when contending with the reactionary forces recently working against globalization. Planet Security is largely dedicated to the Dutch artist and scholar Jonas Staal’s dissection of the propagandistic films of Steve Bannon. While this stark lineup of video screens efficiently deconstructs the alt-right provocateur’s verbal and visual rhetoric, it largely avoids engaging with the emotional vulnerabilities of the people he exploits.

Constituting the whole of Planet Escape, Corrupted Air—Act VI (2019), by Holland’s Femke Herregraven, resembles a sleek, hi-tech panic room, a so-called billionaire’s bunker, complete with bedframes, monitors, and ambient soundtrack. Adding to the eeriness, skeletal projections of extinct animals converse about the “last man” in the midst of this elite survivalist environment.

The greatest number of participants are in the Planet Terrestrial section, which is separated into two loci: the Critical Zone, whose name refers to the thin surface layer of the earth, where all life transpires between the rock crust and the atmosphere; and Gaia, dubbed with a term (the name of the ancient Greek earth goddess) that microbiologist Lynne Margulis and inventor James Lovelock applied in 1979 to the planetary system of human beings, other animals, plants, and microbes, conceived as a living whole. To their strength, many of these participants deal specifically with Taiwan, which is at the forefront of the climate crisis. London-based Territorial Agency’s installation “Oceans in Transformation” (2020) tracks maritime routes, oil and gas extraction sites, and fishing activity surrounding the island on large-scale monitors. Taiwanese artist Chang Yung-ta—following a residency at Taroko Gorge, where an observatory monitors the health of the earth’s surface—has created a simulacrum of the process by which river basins are forged. Cemelesai Takivalet, a local Indigenous artist, has made large-scale wall paintings of bacteria and viruses, reminding viewers of human susceptibility to natural forces, both small and immense.

Indeed, the participants who have created the strongest artworks in this exhibition are precisely those attuned to Indigenous, regional, or even hyperlocal concerns and methods. They address global ecology not by claiming the bird’s-eye view, nor by transmitting data points through a PowerPoint-like presentation, but by utilizing mimesis, parable, visual metaphor, and other tools of poiesis by which a symbolic whole can be conjured from selected parts. Upon entering the museum, visitors are greeted by the Mexican artist Fernando Palma Rodríguez’s serene Nahua-inspired, mechanical-animal hybrid sculptures, which glide around the lobby, demonstrating the compatibility of the manmade and the natural. Likewise, the Paiwan artist Aruwai Kaumakan’s large woven sculptures of fabric, metal, and glass employ techniques rooted in her tribe in Southern Taiwan. To truly think “terrestrially,” these artists suggest, we need to value those elements of an artwork that are least easily transferrable in the global art market. The time has come to reorient our vision “Down to Earth,” as Latour titled his 2018 treatise on politics in the “new climactic regime.” “If it is a matter of multiplying viewpoints so as to complicate all ‘provincial’ or ‘closed’ views with new variants,” he writes, “it is a fight that deserves to be fought.”

In order to do that, however, we need to eschew the instant legibility of a uniform “global art”—instantly legible, that is, to a select few—and develop a greater appreciation for the local and regional. Artists like Palma Rodríguez and Aruwai may not have a solution to the worldwide crisis, but they know it will be found by paying attention to what’s immediately around us, beneath our feet, and above our head.