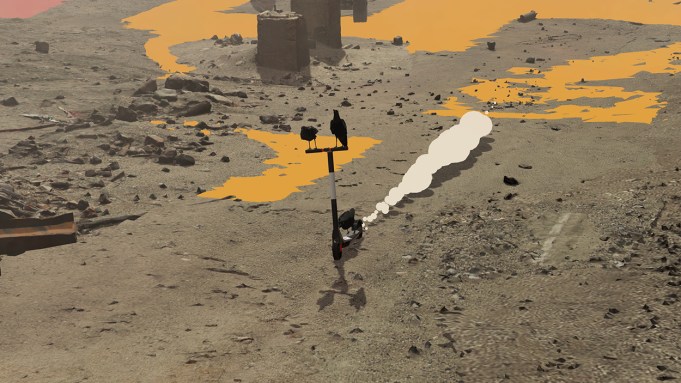 Theo Triantafyllidis’s exhibition “Ritual” is presented by Meredith Rosen Gallery as a website, though one could also say it takes place in two other locales as well. One is a remote abandoned mining town in the California desert, where the artist installed and documented his sculptures, made of found and 3D-printed components. The other is a game engine, where digitized forms and environments based on this desert milieu meet in a simulation, a self-playing game where elements interact with each other according to programmed rules rather than human volition. The cameras in the simulation follow various vignettes; perspective changes at random. Triantafyllidis’s photo and video documentation of his sculptures and looped excerpts from his simulation alternate in the downward scroll of the “Ritual” website. The two kinds of media play off each other, generating a complex system that engages and builds on the traditions of Land art by not only intervening in a place but representing the site’s openness to change.

How Does AI Change the Way We Perceive Art?

Triantafyllidis enhances the rugged, ruined quality of his chosen desert site with post-apocalyptic imagery. Digital animals run amok in a place forsaken by humans. Mounds of scrap metal and hard-to-identify dilapidated machinery are littered throughout a derelict building’s concrete boxy frame. What look like overturned satellite dishes, helicopter rotors, and rusted I-beams jut from the ground haphazardly. Plumes of smoke rise up from far-off trash heaps. A drone’s-eye-view shows scattered activity in a cluttered area.

Triantafyllidis frequently documents his sculptures through brief video loops rather than still photographs, to evoke the effects of weather and light. In some birds are meant to be caged (2019), taxidermied crows perch on a salvaged Bird electric scooter, one clutching a cigarette butt in its beak. On the “Ritual” website, the crows’ feathers and the hair extensions dangling from the handlebars move gently in the wind. The simulation brings to life the pun on nature and tech, as the crows take the Bird for a joyride around the blown-out landscape. A cackling pair of animated hyenas watch the crows from a broken-down sedan, blasting club music from the car’s speakers. These beasts also appear in Frens I and Frens II (2020), tapestries ordered from the kind of weave-on-demand service that turns JPEGs into textiles. In the documentation they lie on a rock, baking under the sun and rippling in the breeze.

At one moment, the simulation’s camera hovers over marching ants, each carrying a bit of detritus—a plastic flower, a pill, an obsolete tape cartridge—as they circle a precarious sculpture reminiscent of the balanced objects in Fischli & Weiss’s photo series “Equilibres” (1984-86). There’s no analogue to this structure among Triantafyllidis’s physical sculptures, though the virtual work might be seen as a sly reference to the garbage-picking process behind Decoy II (for that fucken oil squirting drone), 2020, a bird’s nest woven from dry palm fronds, feathers, and construction fencing, with a pair of bright yellow ping-pong balls as eggs in the center. Triantafyllidis digitally manipulates some photos and videos to make them resemble simulated space. Images of mountains and ruins appear against monochromatic backgrounds: pale gray, muted pink, or construction-fence orange.

Land art has had a complex relationship with media and technology. Interventions at remote sites were—and are still—experienced primarily through documentation. Michael Heizer addressed this problem by producing photographs representing his earthworks at a one-to-one scale. The actual-size prints gave the artist a control over the work in the gallery that he couldn’t exert on the site. In his 1968 essay “The Sedimentation of the Mind: Earth Projects,” Robert Smithson champions Heizer for his use of “dumb tools” like picks and shovels, arguing that these achieve a deep connection to the land that is impossible when it’s shaped by the developer’s bulldozer, which “turns the terrain into unfinished cities of organized wreckage.” Though both artists opted for excavators to realize large scale projects, especially after 1968, they continued to ground their interventions in simple gestures. The wild space that surrounds the legible, geometric interventions of Land art, and the post-industrial ruins left by unartistic uses of heavy machinery, constitute Triantafyllidis’s chosen site. His statement casts the inscrutable ritual shown in the work as an example of how “Nature is healing.” This may be a cynical evocation of COVID-19 memes for promotional purposes, but it might also be an assertion of the simulation’s sensitivity to flux. Triantafyllidis’s approach to Land art isn’t an attempt to establish control, as Heizer did with his one-to-one scale photographs; it honors the spontaneity of conditions at the site.

Triantafyllidis has used computer simulation to create controlled chaos in works like Seamless (2017) and How to Everything (2016), where menageries of animals, robots, vegetation, and squiggly patterns interact with each other as they carry out seemingly random tasks. Over time, the absurd logic of these relationships becomes legible as the viewer begins to discern the program’s rules. In Ritual the randomness is hemmed in. The work is more cohesive than the artist’s earlier simulations. But Triantafyllidis showed those earlier works in galleries, where simulations ran in real-time on computers installed in the space. The online exhibition “Ritual” has to face the technical limitations of running software in a browser, where inconsistent internet connectivity could make the work unviewable. This accounts for the decision to present Ritual on the website as prerecorded clips rather than a live simulation. (At the bottom of the “Ritual” page, there’s a link to a YouTube video preserving the stream from the exhibition’s opening, when the software did run live.)

As a result, the online exhibition seems like excessive mediation. With its shifts between simulations, documentations, and eye-tricking digital manipulations, “Ritual” is a more engaging scroll than the online viewing rooms that have become the standard exhibition format during the pandemic. Triantafyllidis is making the best of a tough situation. But in the end, the site brackets his work into framed images, limited perspectives, and prerecorded loops. Perhaps it’s best to think of this as a gesture toward the potential of simulation as a direction for Land art: a sketch or a proposal for how we might rethink ideas of site and mediation.