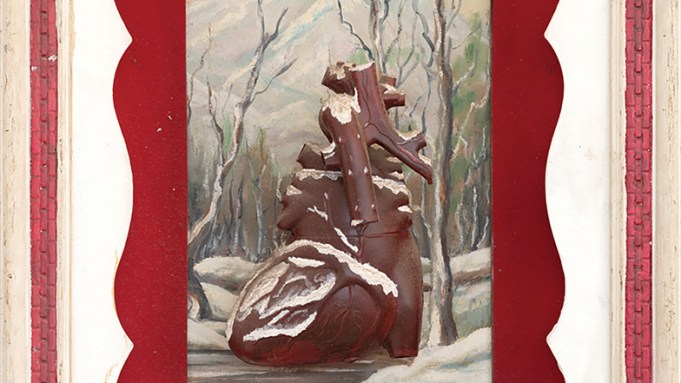 In 2016, Potts Plumbing Parts in Alhambra, California, stopped selling pipes and started showing art. The shift came naturally: brothers Tom, Joe, and Rick Potts—who took over the store, which their grandfather opened in 1939, from their parents—are themselves artists. (They’re also founding members of the legendary 1970s fringe-rock collective Los Angeles Free Music Society.) When they decided to hang up their wrenches, as it were, they handed off the storefront to a group of young artists and curators, who turned it into an exhibition space. (Joe and Rick kept studios in the store’s back rooms. Tom moved to Montana.) This show presenting the brothers’ particular home brew of paintings, drawings, and assemblages is the gallery’s final exhibition—a fitting farewell.

Tom makes practical concoctions, such as the sign on the building’s facade that spells out the store name in pipes. In the show, a huge rack made of rusty lengths of steel, which he had constructed to hold the shop’s wares, serves as a minimalist sculpture dominating the gallery’s floor. The one piece of dedicated “fine art” by Tom, from around 2005, is a sea turtle shell with skeleton arms and a burl head—a contraption not unlike the jury-rigged custom plumbing solutions for which the Potts store was known.

Joe explores the darkness of pop culture in wall-mounted works employing grids. Mirror (Ricci), 2016, for instance, is a horror show in which low-resolution close-ups of actor Christina Ricci are covered in blood-red paint and thick varnish. A nearby work, All-Seeing Eye (2015), comprises a series of twenty text-heavy posters in which Joe describes versions of the oculus—a symbol associated with Lucifer, the Illuminati, Sauron, and the NSA—in the style of druggy conspiracy theories. Hung in a corner of the gallery, a 1994 collaboration between Joe and Rick titled Valentine—in which a sculptural model of a human heart is framed in front of a painted winter landscape—is exhibited in unrestored condition, the work’s red velvet matting practically gray with dust. This deference to the passage of time is the show’s most elegiac touch.

Of the brothers, Rick is the most prolific. His toy-based assemblages and markedly lysergic drawings fill the gallery. Highlights include a bizarre untitled acrylic portrait of a man with a corkscrew nose and skeleton body (1976) and a painting of a floating eye (Eye, 1980). The show also includes an assortment of his pen-and-ink fantasias on cheap paper (such as stationery from plumbing wholesalers), which date from the 1970s, when he was in high school, to the early ’90s. One group features images of an anthropomorphic log strolling past a mushroom; a Surrealist-style staircase with a face; and a cut-rate cartoon mouse holding a soda marked DALI. Dissolution tugs at Rick’s drawings, most of which are undated and fragmentary. The characters grin optimistically despite their incompleteness. Maybe, given enough time, the ape-headed skeleton shown playing a log with a saw can carve a violin.

In the end, the exhibition, which is titled “Don’t Think,” is less about the individual works than about the heartfelt compulsion of the true artist and the endearing strangeness of life at its most mundane. This show in the Potts family’s plumbing store is likely the most comprehensive retrospective the brothers will ever receive. In other words, it is about the lives of artists as they often really are.