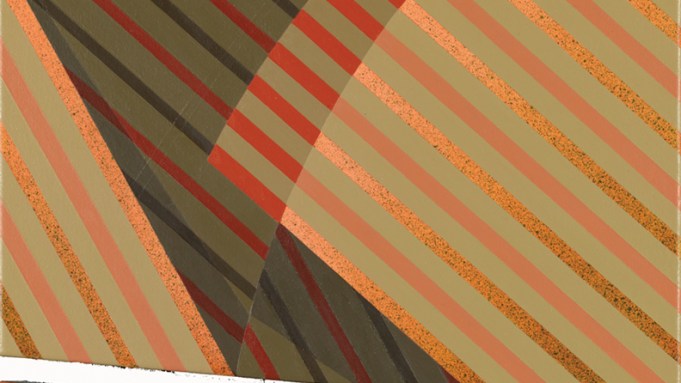 The thirty-two small, abstract paintings in Tomma Abts’s show, which the Art Institute co-organized with the Serpentine Galleries in London, recall what Ezra Pound said he was trying to do with his short imagist poems: “record the precise instant when a thing outward and objective transforms itself, or darts into a thing inward and subjective.” Of equal size (187/8 by 141/2 inches, mostly in rectangular form, though four have rounded or cut corners and one has a slice through its middle), spaced evenly on the gallery walls, and featuring designs of colored lines, planes, angular shapes, and arcs, the works, made between 2002 and 2018, might initially appear to be the products of a computer, or a mind trained to think like one. But that idea is quickly dispelled upon their close examination.

Two ribbonlike bands interweave in a composition-spanning loop in Lüer (2013). (Abts draws the titles for most of her works from a German book of first names.) One is about an inch wide and displays an airbrushed ombré pattern in black and beige, and the other is about a third that width and painted a solid dark gray-green with short bands of orange, red, violet, and blue, recalling a coral or milk snake. (Distinguishing between one and the other reptile can mean the difference between life and death.) The ribbons appear to undulate as they make their way around the shallow pictorial space, with several areas being anchored to the background and others rising up and casting shadows.

Schwiddo (2008) features a pair of mint green disks with pink perimeters. Bisecting each disk—attached at left to the pink border and seeming to angle up off the circular surfaces—is a dark green bar that suggests a strip of litmus paper or the reed of a mouth harp; behind the two disks is a kind of scalloped pattern of semicircular striped segments on a gray background. The composition overall—as well as that of Lürro (2008)—evokes a deconstructed musical staff with time signatures: a fitting reference point, as rhythm and meter are fundamental to Abts’s works.

Some paintings rhyme with each other. Ee (2002), Tedo (2002), and Fale (2003) exhibit faceted starburst patterns, while Fimme (2013) and Ihne (2012) look like origami. Unno (2017), Isko (2008), and Hebo (2013) have flat, spare, open, and predominantly linear compositions, like paintings by Moholy-Nagy. Robert Delaunay, Aleksandr Rodchenko, Josef Albers, and Max Bill also come to mind when looking at Abts’s works. A few pieces in the show are casts of paintings Abts made and sent to a foundry, the approach recalling Jasper Johns. But what’s most salutary and poetic here is how these paintings stake out their own aesthetic terrain. Their resemblances to other works and objects are mostly oblique. I made the various formal comparisons in this review because I have to give you some idea of what the pictures look like. But in fact, Abts’s works are remarkably individual, remarkably “inward and subjective,” in Pound’s words. And in a mediated environment where one has the impression of constantly seeing the same things redone in only slightly different form, these paintings stand out, providing a space for independent critical reflection and emotional rest.