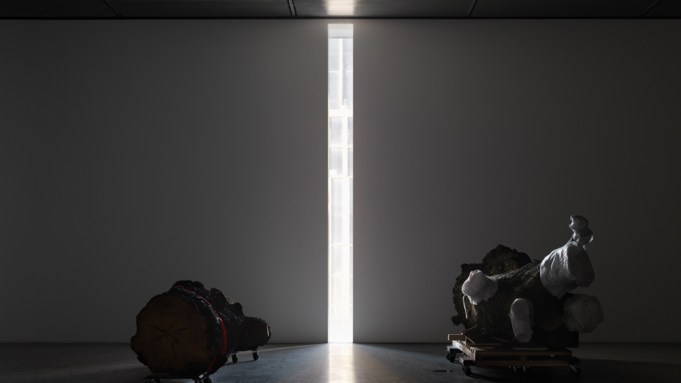 Trisha Donnelly’s inscrutability is legendary. She largely forgoes press releases and other sorts of exhibition didactics describing what the artwork is and how it is intended to be interpreted, and has limited the photo-documentation of her work. When she rode into Casey Kaplan on a horse in 2002 and announced Napoleon’s surrender, the performance lived on entirely by word of mouth. Her efforts can be so subtle you’d miss them entirely. Her 2015 show at Matthew Marks in Los Angeles included a back door left ajar as part of the installation. Requiring viewers to suss out meaning entirely on their own, Donnelly’s work can be too arcane for its own good. Or, it can make the everyday uncanny. Her installation at the Shed fell in the former camp.

In typical Donnelly fashion, the press release was a blank sheet of paper and the show had no wall text. To get to the work, you had to walk through a large room awkwardly occupied by massive risers that faced a floor-to-ceiling glass wall overlooking the Shed’s massive theater. The impression, inevitably, was that you were in the wrong place. Press on, however, and you encountered a huge room that was mostly empty and dark save for the light emitted through a slit built into one wall. To either side of this opening were the trunks of two large trees resting on dollies. The trees were apparently a redwood and a pine sourced from California that had been dying due to effects of climate change. Such details were, of course, nowhere to be found in the show; I know them only from private correspondence I had with a Shed press representative. The trunks were kept in the gallery on a kind of cruel life support, their exposed, cut sections watered daily by Shed staff. Their branches were massed haphazardly on dollies in the opposite corner of the room, many of their cut ends wrapped in foam and tape, as if this were an arboreal triage unit. A cluster of large black speakers, also on dollies, blasted the “Habanera” from Carmen. The Shed press person noted that Donnelly chose the song because it was sung by Leontyne Price, who in the 1960s became the first African American prima donna at the Metropolitan Opera. Perhaps Donnelly intended the song to serve as a subtle critique of the billionaire-backed Shed itself, which joins the ever-growing list of art institutions that reinforce socioeconomic and racial inequality in their very existence while putting forth a program that speaks to liberal notions of diversity and inclusiveness.

The artist’s maimed trees, meanwhile, appeared to gesture to the environmental costs of real estate initiatives like Hudson Yards. Carmen is a wild heroine—too wild and independent, perhaps, for the more conservative kind around her. The redwood and pine, in a sense, had a similar status here. Just behind the sliced wall, an area with a large picture window reinforced this point. Visitors gathered in this space, seeming less interested in figuring out the meaning of the trees and the opera soundtrack than in taking selfies and iPhone shots of the sparkling skyscrapers surrounding the manicured park outside. While Donnelly might have considered the view to be as much a part of her show as the installation in the dark gallery was, her refusal to contextualize either in even the smallest way did her work a disservice, and placed too high a burden on visitors to connect the dots.