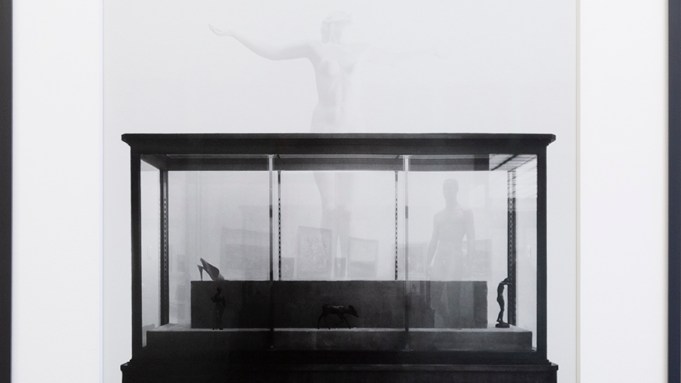 The centerpiece of Troy Brauntuch’s exhibition, “A Strange New Beauty” (all works 2019 or 2020), is a set of thirty-two photo-engravings depicting installations of academic landscapes, neoclassical nudes, and equine statues in the marble-accented galleries of a conspicuously empty museum (A Strange New Beauty [32 Prints]). Handwritten numerical annotations indicate that the source images are archival, but Brauntuch transforms them into something more ambiguous: he not only reproduces these photographs as sumptuous, velvety prints, but tonally inverts them, an alteration that imbues elements like bronze sculptures and shadows with an eerie glow, and gives the distinctly old-world setting an otherworldly, ominous cast.

Such morbid intimations are appropriate. The prints are based on digitized photographs of the Great German Art Exhibitions (GDK): shows mounted annually by the Nazi regime between 1937 and 1944 as doctrinal counterpoints to its better-known (and better-attended) exhibition of “degenerate” modernism in 1937. What makes this reference so disturbing is, of course, the fact that the Nazis used the exhibitions Brauntuch depicts to legitimize a program of genocide and imperialist crusading. Also unsettling, however, is the ordinary conservatism of the art favored by the National Socialist elite. Most of the works that appear in Brauntuch’s reproductions would not look out of place in the period rooms of many European and American museums today. The possibility that viewers would misrecognize the source material was evidently important to Brauntuch, who took care to avoid and, where necessary, efface inscribed swastikas, portrait busts of Hitler, and other such identifying markers from the photographs.

A facing group of five digital prints, A Strange New Beauty (White Cases), consists of more obviously composite images. Each depicts a statue of a female nude by the Nazi-sponsored sculptor Josef Thorak, rendered transparent by Brauntuch, rising behind a glazed display case. The image of the container came from the GDK archive, but Brauntuch has digitally edited its contents, as well as the various combinations of artworks that convincingly appear reflected in its glass panes. What gives the fakery away is the presence in each vitrine of a women’s shoe from Chanel—whose eponymous founder was a notorious Nazi sympathizer—sourced from advertisements printed on the second page of the New York Times between 2014 and 2015. In the original clippings, framed nearby (Selected Shoes), the front-page headlines—G.O.P.’S PATH TO PRESIDENCY, TIGHT BUT REAL; YOUNG PALESTINIANS FAN FLAMES OF NEW UPRISING—loom behind the elegant footwear ads, figuring the twenty-first-century political anxieties that tacitly suffuse the exhibition as a whole.

This is well-trodden territory for Brauntuch, who famously appropriated a set of Hitler’s architectural sketches as part of his contribution to Douglas Crimp’s 1977 “Pictures” exhibition. Brauntuch’s early work provocatively captured an incipient sense that the past’s remove from the present was not as definite as it had once seemed. Why the artist has returned to this material today, a moment marked by rising right-wing nationalisms around the world, is hardly mysterious. Yet Brauntuch’s exquisitely polished prints have a frustrating opacity. This is perhaps the point: he brings viewers face-to-face with one of history’s darkest chapters while insistently withholding the iconic and moral signposts we expect. Brauntuch eschews the sort of viewing guidelines—historicizing captions, narrative framings, emotional cues—that all too readily consign their subject matter to the past, obscuring how certain strains of fascist ideology persist in the present, and maybe even intermingle with more commonplace expressions of conservatism in the domains of visual and material culture. In their spectral pallor, Brauntuch’s prints suggest that we are looking at a revenant.

This article appears under the title “Troy Brauntuch” in the March 2020 issue, p. 82.