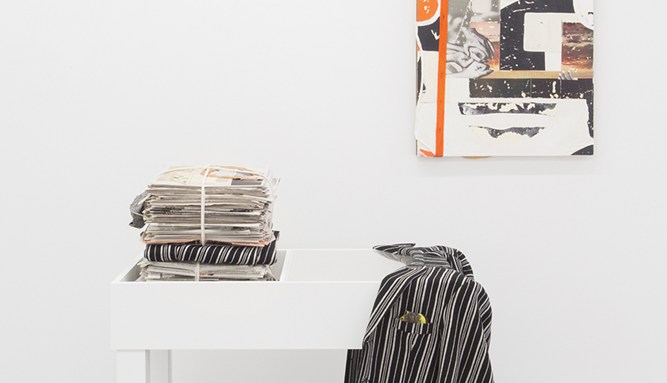 In “Fat Cat Came to Play,” Troy Michie explored the cultural significance of the zoot suit: the broad-shouldered, often striped suit that was popular with black, Italian, and Latino men in the United States in the 1940s. Central to the garment’s history are the Zoot Suit Riots, a 1943 wave of racially motivated violence in Los Angeles that began when white servicemen attacked a group of Mexican American zoot suiters. The exhibition included fourteen works, the majority of which were elegant, wall-mounted assemblages featuring bold pieces of solid-colored material, advertisements, and newspaper clippings against variegated black-and-white backgrounds.

Pull a Comb through Your Coal Black Hair (2017) encapsulated the main themes and formal preoccupations of the work. The five-foot-high assemblage contains three components that immediately draw the eye: a yellow-painted section of a men’s button-down shirt, a semicircle of fuchsia fabric embellished with thick white rope, and a flat piece of green-painted wood with a cutout in the shape of a dress shoe. Looking more closely, one notices a portion of a poster for the 1981 film Zoot Suit in the background, as well as a small black-and-white photograph showing three light-skinned women of color. Michie often uses photographic material to disrupt modernist tropes in his work and to direct the viewer’s attention to sociopolitical concerns, and here he points to issues of cultural appropriation by incorporating a section of a fashion ad showing white male models donning zoot suits. Further, the aforementioned green wooden panel is of the sort used to produce the construction-site barriers that have become a ubiquitous signifier for gentrification in New York, where Michie lives and works. Another assemblage, Pachuco Composition #2 (2016), foregrounds a black-and-white image of a young woman wearing a floral-print dress. Her face has been cut out, rendering her anonymous. Scraps of green and yellow paper appear atop a sheet printed with a men’s shirt pattern, and a black braided belt horizontally bisects the composition as a whole. With this work, Michie posits a connection between collage, garment construction, and identity formation.

In addition to the assemblages, two freestanding sculptures were on view. Fence (2017) is an eight-foot-long piece of chain-link fencing rolled up and laid on the ground, with scraps of fabric, paper, and other materials haphazardly caught in its tangle of metal. The other sculpture was Killer-Diller (2017), which features a tablelike vitrine divided into two compartments, one left open and one topped with plexiglass. From the first rises a stack of bound newspapers and a folded pair of zoot suit pants. The other displays the front page of the New York Times from the day of the 2017 United States presidential inauguration, collaged with an instruction sheet for preparing a garment pattern; a jacket matching the folded pants is draped over this end of the vitrine. While Fence and Killer-Diller covered similar territory as Michie’s wall-mounted works, they lacked the nuanced marriage of form and content that characterized those carefully composed pieces.

One of the wall works was particularly effective. Disruptive Patterns (2017), whose palette is gray, black, and blue, juxtaposes an image of a disemboweled zebra, another of man in a zoot suit whose face has been blacked out, and—reinforcing the sense of violence and serving as a reminder that police officers were among the attackers in the Zoot Suit Riots—a torn T-shirt collar that resembles a handcuff. The work exemplifies the ways in which collage techniques and abstraction can be deployed to narrate complex histories.