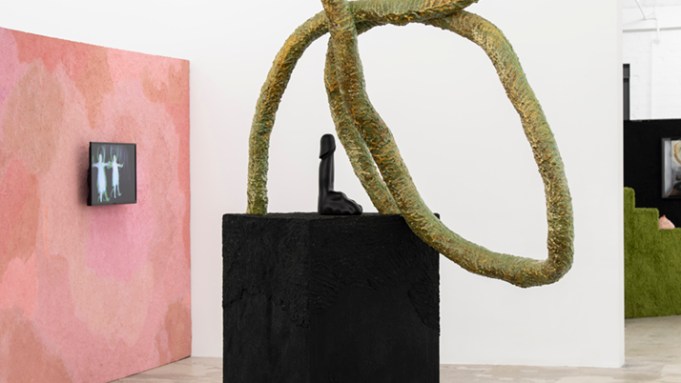 At the first edition of Frieze Los Angeles, in mid-February, a papier-mâché serpentine form overtook a few buildings on the back lot of the Paramount Pictures studios. While exhibitors set up camp inside a white tent at Paramount, the fair’s crop of artist projects was strewn across the studios’ five acres of New York City sets. Los Angeles–based artist Trulee Hall’s Infestation had invaded the SoHo simulacrum: lumpy, bright green, and the width of a human thigh, it weaved its way in and out of loft windows, wrapped around fire escapes and across roofs, and disappeared into the belly of a subway station. It was both grandiose and a bit goofy, a monument to multi-penetration that managed to be as playful as it was perverse. Nothing else stood out, or nestled in, quite the same.

A few miles east, in the real Arts District in the (somewhat) real Los Angeles, Hall’s debut solo exhibition had even more chutzpah. By the entrance, she had erected a colossal gold wall adorned with towering corn cobs and nude female figures rendered in relief. This gleaming wall seemed, by turns, sincere and parodic, a genuine feat and a satirical take on gilded ambition, not unlike that which might be behind constructing a “big, beautiful wall” just south of here.

At the center of the artist’s wall, a large circular portal flanked by two trickling boob fountains beckoned. To walk through was to make a commitment—to accept Hall’s terms and conditions, to step inside her fun-house world. She had festooned the gallery space with sculptures, paintings, installations, motorized mobiles, claymation videos, and live-action videos. Her preoccupation with touching, stroking, probing, and prodding produced an incredibly tactile show. Surfaces were blanketed in texture. Immense slabs of shaggy carpet covered the sea of cement floor, and cakey papier-mâché coated walls, bases, and canvases—the various surfaces tempting us to touch them. Everywhere, protuberances burst forth from sculptures, as if longing to touch us. In one corner of the gallery, a motorized ceramic corn cob popped in and out of a hole in the bare white wall. It was one of the show’s smallest, most furtive works, and it best captured Hall’s winking tone and her delight at having our bodies in her space. Elsewhere, small incarnations of Infestation erupted out of boxes standing on table legs, looping and curling over themselves, like explosions of semi-sexual energy. And overhead, a canopy of hairy orbs, baguette-ish tubes, and—yes—more corn cobs hung on wire from the ceiling, hooked up to motorized contraptions that caused them to swing and jerk.

Themes of touch and penetration also pervaded Hall’s paintings and video works. The female figure took center stage: real-life, claymation, and painted women undulated and overlapped one another, their bodies often blending together. Videos and paintings tended to mime each other, and shared a vocabulary of bright hues, squirmy gestures, and boldly outlined orifices. The vaginas, mouths, and nipples of Hall’s painted subjects became gaping, bright pink rings; in the live-action videos, similar holes were cut out of the performers’ full-body lycra suits. These circles enunciating the body’s openings became rare punctums in a show that, elsewhere, prioritized atmosphere, immersion—a filling up of space. Mouths and vaginas in the paintings also became actual holes, cut through the supports and the walls behind. They were beguiling and inviting, and, among so much matter, their emptiness felt beautifully real.