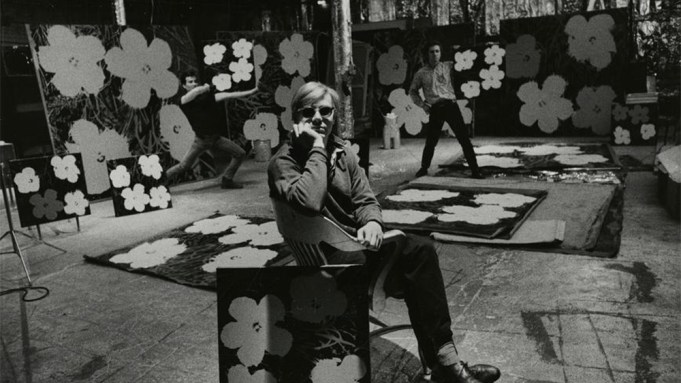 It’s easy to forget that New York titans of contemporary art history like Robert Rauschenberg, Jasper Johns, and Andy Warhol were real people who lived real lives in cluttered apartments that resemble those many of us currently inhabit—square footage notwithstanding. As shown in images featured in this exhibition of Ugo Mulas’s photographs of New York City’s artistic power players from the 1960s, Johns hung out with friends and roasted vegetables, though who knows how great his cooking was—how could it have been with all those liquor bottles crowding his counters? A commercial and documentary photographer from Italy, Mulas met Leo Castelli while shooting the 1964 Venice Biennale, after which he traveled to New York three times and fell in with the New York School and Pop crowds. Mulas’s disarmingly tender photographs humanize his subjects and portray a 1960s New York art world that looks much like the current one, despite our tendency to mythologize that era.

Marisol at poetry reading at Leo Castelli Gallery (1964) documents what resembles the sort of gallery opening one would attend today, replete with the space’s generic track lighting and small cliques of people not paying attention to each other; it’s only the style of dress and the venue’s name that give the photograph away as a relic of a specific time. What’s remarkable about many of these images is that no one is paying Mulas any mind. In Trisha Brown nursing her baby after Thanksgiving dinner at Rauschenberg’s studio (1965), Brown is looking away from the camera, watching people dance, while Rauschenberg is deep in conversation. The only one who seems to notice Mulas is Brown’s baby.

Shown in several photographs, Andy Warhol’s Factory looks downright junky, with its foil-covered walls, bare light bulbs, and worn sofas. While the Factory’s reputation precedes it, the space doesn’t look all that different from the other lofts seen in Mulas’s images, save for the personalities it housed, such as Warhol collaborators and devotees Philip Fagan and Gerard Malanga, who campily pose while surrounded by Warhol’s “Flowers” in one 1964 shot. I don’t know what the hell Fagan is doing, but it’s fabulous; it seems like he’s performing an impromptu dance move, as Malanga holds up one of the paintings while standing in a very fey, severe contrapposto. It’s a hilarious image that lets Warhol’s characters shine through. In Andy Warhol and Edie Sedgwick (1964), meanwhile, the starlet reclines behind the artist on the back of a couch, engaging with her friend in a moment of unguarded intimacy. In instances like these, Mulas’s work really stands out. More than in his compositions or sense of timing, both of which are great, the real feat of his work lay in gaining his sitters’ trust.