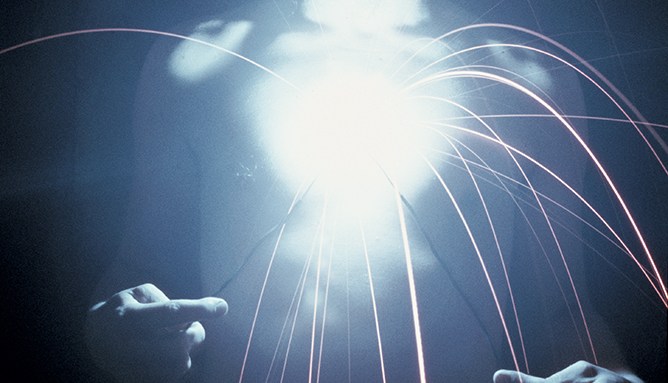 Chris Burden (1946–2015) liked to walk around with the barrel of a loaded Uzi tucked between his butt cheeks. He proudly describes this habit in a 1981 performance clip included in Burden, a new biopic on the artist most famous for risky body performances that changed the public’s conception of what art could be. This captivating film from first-time documentarians Timothy Marrinan and Richard Dewey is tightly edited, with quick cuts and suspenseful archival footage from Burden’s early career.

Burden’s major contribution to art history was his assertion that a moment could be a sculpture, existing most powerfully as an image in the viewer’s mind. As a young artist, he performed works like Shoot (1971), in which a friend shot him in the arm at close range, and Doomed (1975), in which he lay motionless under a propped sheet of glass for forty-five hours. There are many such reels in the documentary, showing the artist dangling naked from a rope or clamped to the floor near electrified buckets of water. The film offers fascinating backstories for works that have existed for many as urban legends: the physiological problem of putting nails through his hands for Trans-fixed (1974), or the hospitalization and police inquiry that followed Shoot. Burden had deep convictions about his work while a graduate student at the University of California, Irvine. “I am an artist and this is a piece of art,” he declares in a muffled recording from his thesis performance, Five Day Locker Piece (1971), where he crouched in a tiny locker as passersby taunted him.

Despite commentary about his life from classmates like Barbara T. Smith, the film does not situate Burden among his contemporaries or within a historical context. This is disappointing, given the anxious and violent tenor of the civil rights and Vietnam War eras, when he produced his most famous works. Burden positioned himself as a recipient of real pain, but where is his practice located in relation to real-world violence?

Describing his work, the artist repeatedly brings up notions of control. In a poolside interview he recalls that “as a child I used to be involved in a lot of accidents. I could count on one every year. Towards the end of the year I started to get real nervous, I was waiting for it to happen. It seems that maybe now I’ve got control over it.” Situating his body in precarious proximity to death through his conceptual performances was a way for Burden to exercise power over his fate. In the film’s most disturbing anecdote, his studio mate Bob Wilhite remembers how Burden would wait around in alleys for someone to attack him so that he would have a reason to use his gun. Was the carefully orchestrated violence of his performances actually a symptom of his sociopathic tendencies?

Moral uncertainty about the political implications of Burden’s work clouds this sensationalist documentary. This territory has been explored by critics in the past. In her 2011 essay “White Fragility,” Robin DiAngelo argues that creating situations of self-victimhood is a form of avoiding responsibility for privilege. Compare, for example, the Uzi-toting Burden to the millions of people on Earth who live in danger without seeking it out. The same year he performed Shoot, Angela Davis went to jail for having a gun registered in her name that was used by Jonathan Jackson to hold up a courtroom during a racially motivated trial. Having been raised in a warzone of KKK violence in Birmingham, Alabama, Davis saw carrying firearms as a necessity. “Most people had guns and we bought guns,” she said in a 1989 interview, “not because we were intending to use them in any offensive way, but because … we needed them in order to protect ourselves, to defend ourselves.” The film leaves ambiguity as to Burden’s ethics. He does not seem satirical when he says that getting shot is “as American as apple pie.” In a 1990 ARTnews interview Burden told historian Suzanne Muchnic, “My work has always been political, but not in the sense that war is bad or the poor are oppressed.”  He goes on to clarify, saying, “I’m interested in values and choosing which way to go. Just being an artist was a political statement when I started.”

The only “anti-Burden” voice included is the laughably elitist British critic Brian Sewell, who plays devil’s advocate. A man who famously once said that “only men are capable of aesthetic greatness” condemns performance art as “rubbish” from his gloomy professorial office. Burden does, however, gesture toward a feminist critique of the artist’s work through accounts from some of the real victims of his performances. It’s here that we find an entry point for considering Burden’s morality. People in Burden’s circle, especially women, speak of the emotional toll his dangerous antics and substance abuse took on those who cared for and gave him opportunities. At one point Burden reminisces that the buildup of energy and discomfort of those around him served as a primary motivation for his performances. His ex-wife Barbara Burden, who recorded an audio interview but chose not to appear on camera, recalls “pushing my own anxiety down so I could function in a way to be helpful.” She supported him financially for a decade, and participated in works like Match Piece (1972), in which Burden flicked lit matches at her. “Yes, they burned,” she tells the documentary crew. Burden ended their marriage in 1974 by publicly announcing his affair with artist Alexis Smith via a video piece called The Confession. Another clue about his dubious treatment of women can be found in the TV performance piece Big Wrench (1980), where he describes chasing Smith into the desert while yelling slurs at her over a loud speaker.

One might expect a provocateur like Burden to meet an untimely end. But he didn’t. The film crew visited an elderly Burden at his remote California compound. The documentary characterizes Burden’s trajectory away from the radical performances of his youth as a kind of regression. Andrew Bird’s moody instrumentals make Burden’s evolution feel mournfully dramatic and oversimplified. In his later work, he continued to seek moments of intensity, using erector sets, spinning wheels, and fleets of submarines and toy cars in projects of awe-inspiring scale. But these come across more like realizations of childhood fantasies rather than violent experiments.

The documentary does not examine Burden’s career developments in tandem with the boom of the art market, and what that must have meant for an artist who became famous for renouncing material objects. It even fails to mention that he was the first artist represented by Larry Gagosian in 1978. The film’s gleeful nostalgia for Burden’s daring ’70s stunts contrasts with the image it offers of Burden in 2014, rambling around his ranch in Topanga Canyon as an endearing, grandpalike figure flanked by dogs and a reverent staff of bearded young fabricators. At the end of his life Burden became a martyrlike figure of a different sort. Critic Christopher Knight speaks of him as a “beloved emblem” of Los Angeles—a benevolent creator of art for public enjoyment, like the city’s best selfie backdrop, Urban Light (2008), 202 vintage streetlamps installed in symmetrical rows outside of the Los Angeles County Museum of Art.

Burden tested the limits of where art could begin and end by playing with the tension between dematerialized performance and its circulation. The film substantiates the nihilist flavor that surrounds accounts of Burden’s ephemeral performance work, and the way it glorifies his aggressive behavior is unsettling. If the Uzi anecdote gives any clue, Burden is not the hero the art world needs right now.

BURDEN is in theaters, on Amazon, and on demand beginning May 5.

VANESSA THILL is an artist, writer, and curator based in New York.

Aston Martin Unveils the Race-Inspired, Open-Cockpit DBR22 Ahead of Its Pebble Beach Debut