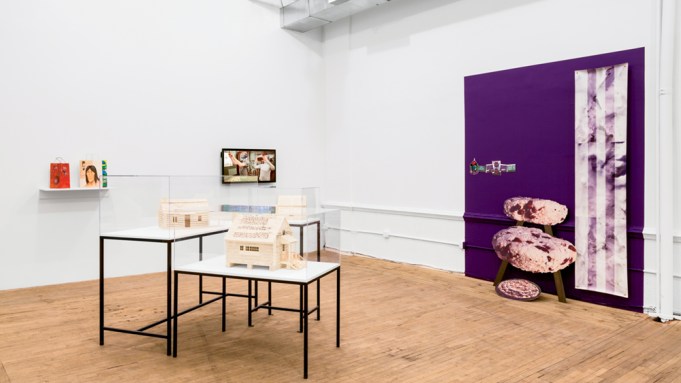 With an unusual gerund for a title, “Unholding” dwelled in the tension between the tenses used to describe Indigenous presence. “We were here”: prior occupancy. “We are still here”: survivance. “We will always be here”: resurgence. Organized to commemorate the thirtieth anniversary of “We the People,” an exhibition of work by Indigenous artists at the same venue, “Unholding” straddled the past and a present inflected by it. Of the eighteen works on display, three were made in 2017 and only three more were from this millennium. Most of the other works either appeared in or were from the same period as “We the People” and the 1986 “Ni’ Go Tlunh A Doh Ka” (We Are Always Turning Around on Purpose) at SUNY Old Westbury’s Amelie A. Wallace Gallery. Both of those shows were curated by British art critic Jean Fisher and artist Jimmie Durham, who has faced increased scrutiny in recent years for his refusal to address the alleged lack of documentation or family ties connecting him to the Cherokee Nation. The title of “Unholding” comes from a poem in Layli Long Soldier’s 2017 collection Whereas, which twists the language of treaties and official apologies by the United States to Indigenous people, apologies that cannot be accepted because the colonial time they frame as past is still present. The disjunction from official time that marks Indigenous presence, however, can be a playful place, and “Unholding” showed the wily maneuvers of Indigenous artists to open up spaces for collective life and expression.

Pena Bonita’s Stalled (1987) and her new revisiting of that work, Stalled on the Way to Rosebud (2017), comprise altered prints of a photograph of a man looking under the hood of a broken-down car on a reservation road. Both works—the former incorporating paint and the latter paint and collage elements—show multicolored figures and shapes blooming around the scene. In Stalled, the images are absurd or abstract: a T. rex coming out of the driver’s seat, a door opened up on the road, yellow swirls obscuring the car altogether. In the new work, almost all the overlaid images are of people, who appear to have gathered at the car on their way to reach a common destination. Other works in the exhibition addressed the carceral condition of having one’s identity fixed by colonial assumptions. Culture Capture (2017), a short video by Adam Khalil, Zack Khalil, and Jackson Polys, shows two people visiting the glorified colonial cabinet of curiosities that is the American Museum of Natural History. They wear grotesque masks resembling faces turned inside out, as if to reveal the elemental body horror that arises in reaction to the AMNH’s voyeuristic display of Indigenous objects stripped from their homes.

Certain pieces on view confronted the issue of property relations to reveal the sediment of conquest and colonialism in every inch of American soil and cement. Alan Michelson’s Permanent Title (1993) is an installation of shroudlike muslin wax bags displaying charcoal rubbings made at various cemeteries. Countering the American fascination with the Indian burial ground, Michelson sought out eighteenth-century cemeteries where settlers had been interred. The work evokes the futility of concepts of ownership by presenting limp sacks full of nothing. A similar feeling attends the paper bags of G. Peter Jemison, which feature crayon, colored pencil, and marker portrayals of moments in imperial history and portraits of Indigenous men (some Maori, some Haudenosaunee). These works have wry titles: a 1986 piece depicting Lady Liberty dancing in high heels with just a small flame in her hand as a buffalo watches is Liberty for Sale, while a 1987 example that transforms a bag from chic cookware brand Dansk into a scene from the Iran-Contra hearings is An International Lie.

In Fisher’s reflections on “We the People,” which were published in the exhibition booklet for “Unholding,” she quotes Durham describing that show’s theme as “us looking at them looking at us.” In “Unholding,” the refracted vision entailed in trying to see Indigenous life as it is perceived from without while keeping an eye on the greedy surveyor was, fittingly, most sharply expressed in the accompanying film series. In the 1972 documentary Do Indians Shave?, Chris Spotted Eagle asks the titular question to Easter Day parade attendees. Guillermo Gómez-Peña and Gustavo Vasquez’s short film Bizarre Thanksgiving Performance Ritual (2013) depicts a Chicano Indigenous man wearing a headdress and heavy metal–inspired leather cuffs who says in a “fake Indian dialect” that his favorite part of the turkey is “la carne blanca” before repeatedly stabbing the cooked poultry.

The works in the gallery, for their part, manifested contradictions of place, time, and movement. Like the traveler in Bonita’s photograph, Native artists continue to exist in conditions of precarity and confinement, impeded by assumptions that they are forever stalled on the road to modernity. For the film screenings, performances, and poetry readings, the basement at Artists Space filled with Native artists, writers, and scholars. These subterranean events opened spaces not just of mere Indigenous presence but of critique, experimentation, and conversation, thereby amplifying the hope in the works in the gallery upstairs to loosen the boundaries within which Indigenous people are held.