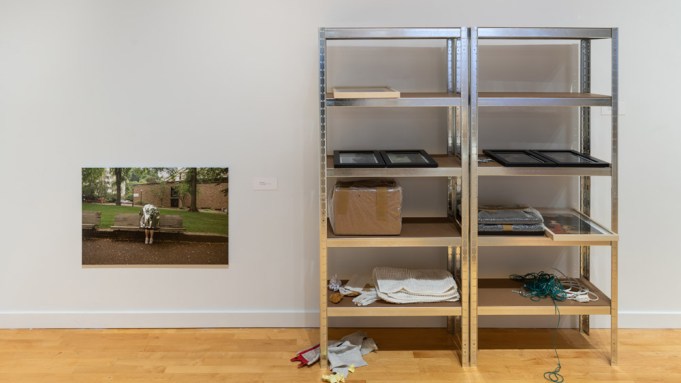 Numerous curators and scholars have endeavored to recover names of forgotten, oppressed, or under-recognized artists as a countermeasure to the stronghold on name recognition maintained by a select group of white men—Rembrandt, Picasso, Warhol, and Koons, to cite a miniscule few. Independent curator Lucy Cotter pursued a different approach in “The Unknown Artist,” an exhibition she organized for the Center for Contemporary Art & Culture at the Pacific Northwest College of Art (PNCA) in Portland that—rather than highlighting marginal names—probed the very values of attribution. The show featured eleven unattributed objects from around the world that spanned twelve centuries, as well as ten contemporary artworks exploring anonymous making in present contexts ranging from industrial manufacturing to collective movements.

At Art Basel Miami Beach, an ATM That Announces Your Account Balance

Cotter selected the unattributed objects from among the roughly 1,300 such works that once belonged to Portland’s Museum of Contemporary Craft (MoCC). Since MoCC closed in 2016, these works have been stewarded by PNCA. The examples on view ranged from a pre-Columbian ceramic seated figure holding a gourd (ca. 800–1000 CE) to woven wool textiles from the 1940s to an intricately woven basket (1971) from the Nupe tribe in Nigeria. The label for each read, ARTIST UNKNOWN. The wide-ranging assortment spoke to the diverse reasons that works go unattributed: some pieces were considered women’s work and therefore craft rather than fine art, while others were ritual or functional objects later appropriated for the art museum context. Perhaps some were collectively produced, belonging to a time, culture, or tradition that places little value on authorship or autonomy.

The contemporary artworks that accompanied these objects framed attribution not just as an art historical problem, but as a labor issue, raising questions concerning which makers are named and valued. In the eleven-minute video 75 Watt (2013), London-based artists Revital Cohen and Tuur Van Balen transform factory workers’ repetitive actions into absurd choreography. The camera pans down a line of workers at a conveyor belt in a factory in Zhongshan, China. At first, the video appears to show regular factory activities. However, instead of starting with a product design and then determining the necessary actions to assemble it—cut here, adhere there, wire internally—the artists observed the movements of assembly line workers and designed an object whose sole purpose was to create a performance surrounding its fabrication. The product—a kind of angular plastic object with a handle—represents production for production’s sake, underscoring the societal indifference to the impact of manufacturing on human welfare. Cohen and Van Balen hired sixteen workers from the Zhongshan factory to perform, and included their names in the credits, framing the bodily dexterity required for industrial manufacturing as an art form.

While Cohen and Van Balen act as puckish critics of mass production, devalued human labor, and vacuous consumerism, Cannupa Hanska Luger, a New Mexico–based artist raised on the Standing Rock Reservation in North Dakota, highlights the kind of making that privileges shared goals over individuality and authorship. For Mirror Shield Project (2016), he was inspired by women who held up mirrors to riot police during the 2013 Euromaidan protests against government corruption in Ukraine. When members of the Standing Rock Sioux nation began protesting the construction of the Dakota Access Pipeline (DAPL) in 2016, he conceived of a way to use the Ukrainian protesters’ tactic against the increasingly violent government and police response, making reflective shields out of plywood covered in mylar. He then posted an instructional video online and encouraged people both local and remote to make mirror shields for the protesters. At PNCA, this video played across from two mirror shields used during the DAPL protests as well as documentation of their use. Combining simple, low-cost crafts and networked collaboration, The Mirror Shield Project offers a potent force for resistance. The uncredited craftspeople here are not exploited laborers but collaborators.

Both 75 Watt and The Mirror Shield Project highlight the potential for artistry in cheap, mass-produced materials. Other works in the exhibition do the reverse, showing how easily once-treasured objects can fall into obsolescence. Like the unattributed works from MoCC’s collection, an untitled installation from Hungary-based Zsolt Asztalos’s series “Unknown Artists III” (2014–19) illustrates the tragically mundane process by which artworks can become mere things. In this work, replicas of generic, unattributed European paintings that belong to various museums sit on metal shelves with a messy collection of art installation tools. Some of the reproductions are bubble wrapped and rendered invisible. They feel totally insignificant, as do the board-mounted photographs of paintings unceremoniously stacked and draped with packing paper.

“The Unknown Artist” provided a nuanced framework for thinking about notions of artistic authorship, raising provocative questions: How are economic and cultural value distributed? How can we recalibrate value systems built on exploitation? How can authorship reveal or hide labor, and is authorship inherently valuable? While the answers remain elusive, the show brought together a variety of works that provided a new vocabulary for imagining radical, much-needed alternatives to the status quo.