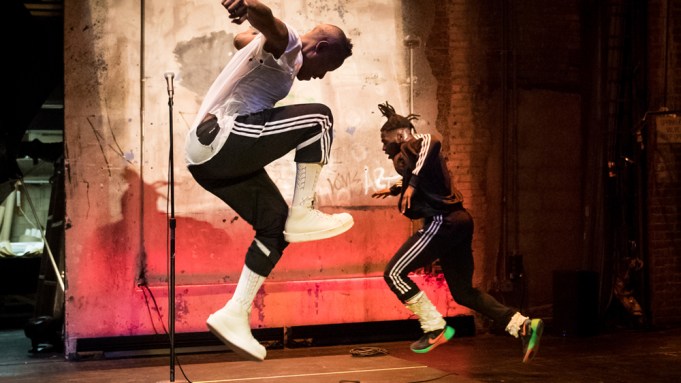 American Realness, an ambitious experimental dance and performance art festival, began humbly in 2010 by presenting the work of eight choreographers at Lower East Side theater space Abrons Arts Center. The 2018 program, presented by Gibney Dance in association with Abrons, featured eighty-nine performances of seventeen productions at several venues. Despite this impressive growth, American Realness has maintained its original mission to present work that is, as stated on its website, “loud, queer, disturbing, hilarious, critically engaged, beyond post-modern and undeniably present.” Performances I caught this year at Abrons checked all those boxes, while also pressing me to interrogate my role as audience member. What, they asked, did I expect I deserved out of this?

The work that resonated the most for me was nora chipaumire’s searing and defiant #PUNK (2017), an hour-long frenetic sensory assault of dance, voice, and music that left me feeling half-deaf and physically obliterated. Conceived and choreographed by chipaumire, it also featured Jamaican-born artist and dancer Shamar Watt and guitarist David Gagliardi of Los Angeles punk band Trash Talk. The piece is the first in a three-part series, “#PUNK 100% POP*NIGGA,” that charts chipaumire’s sonic influences during her youth in Zimbabwe. According to the program notes, the series “confront[s] and celebrate[s] the bodies and aesthetics of iconic women: Patti Smith (#PUNK), Grace Jones (100% POP), and Rit Nzele (*NIGGA).”

After arriving at the Abrons playhouse, I was directed onto the stage and corralled with the rest of the audience in an area beside a set of risers The house was empty. Bright lights stayed on for the entire performance, illuminating everyone in attendance. Like many theater and dance audiences, we were mostly white. Clearly, we were part of the set, meant to observe not only the performance but also each other’s responses to it. Punk isn’t just a noun or adjective; chipaumire also seemed to be using it as a verb, in the sense of dupe or deceive. She thwarted the audience’s expectations of comfort. Ill at ease, we awkwardly had to decide whether we could take a seat on the stage or remain standing for the next sixty minutes.

Music blasted from speakers and chipaumire and Watts stormed the stage in matching tracksuits. They repeatedly shouted, “Are you ready?” and “This is an introduction to the introduction!” Seated on a diminutive amplifier on a corner of the riser, Gagliardi noodled guitar leads over a diverse prerecorded soundscape that included dub, mbaqanga, and Jimi Hendrix. Roaring, chipaumire said she “fuck[s] with the past, the present, and the future” (a play on, or a jab at, Patti Smith’s “Babelogue,” the spoken word prelude to her incendiary song “Rock and Roll Nigger”). Watts was electric, echoing chipaumire’s voice, goading the hesitant audience to loosen up. He clapped rapid-fire to the dense beats, urging us to keep up with him. Eyes darted around fearfully as audience members feared they couldn’t manage to clap in time.

After calling out Elvis for appropriating and profiting off black musical culture, chipaumire dared us in the audience to “steal this.” As Gagliardi, who is white, riffed, neither dancer ever addressed him; he seemed intentionally separate and obedient. The pummeling music was relentless as chipaumire and Watts shed layers of clothing and introduced dances called King Kong Jesus and London Bridge, confronting our gazes and reveling in the awkward responses. When it ended, people looked hungover. I’ve been to a lot of punk shows, but this was one of the most battering performances I’ve witnessed. It put me in my place, sending me scurrying to the train, regretting having pitched a review of it. I’m white, so I am complicit in and benefit from all the power imbalances chipaumire interrogated. What’s more, by rejecting conventional performer-audience relations, she got rid of the foundation that criticism itself is based on. And anyway, her work doesn’t need a stamp of approval from my white fragility.

A few days later, I attended Neal Medlyn’s I <3 Pina (2017), a performance about developing a performance about the late choreographer Pina Bausch’s work and the fandom it garnered in later years. Medlyn showed clips from the television series “The Bachelorette” and later acted out a funnily banal date scenario with dancer Maggie Cloud (who also interpreted Bausch’s choreography throughout). A projection of text scrolled by that included messages Medlyn traded with admirers of Bausch’s work as he tried to figure out the piece’s angle, bits about his frustrations with international curators and applying for grants, and the fact that he’d originally wanted to call the piece White People Running Into Each Other Over and Over. Medlyn, in a well-tailored suit, sang along with a few pop songs, more restrained than I’d seen him before. A lonely bar cart sat onstage waiting for patrons.

It seemed like Medlyn was having a bit of a crisis. He’s known for obsessive, though comedic and deconstructive, explorations of celebrity through his “Pop Star” series. He has embodied icons like Michael Jackson, Miley Cyrus, and Beyoncé with a scrappy religious devotion that garners equal parts awe and guffaw. But in I <3 Pina, Medlyn may have chosen a muse with whom he ultimately couldn’t connect. With Medlyn so wrapped up in communicating how byzantine he found the process of staying motivated to complete the work, I wondered if the audience mattered at all, or if we were present to fulfill contractual elements of a grant. The piece wasn’t joyless, but it was subdued in comparison to his previous works that I have admired. As Medlyn sang over Rihanna’s “Needed Me,” an anthem about being a single, self-actualized, “savage” woman, I couldn’t help but recall chipaumire confidently sneering, “Steal this.” I thought about whiteness, novelty, and mediocrity. I’m no Bausch scholar or psychoanalyst, but it seems to me that Medlyn may have been wrestling with those very qualities in her work and his own.

On the festival’s final night, I saw Michael Portnoy’s inside-baseball pastiche Relational Stalinism—The Musical (2016). Conceived as a series of Dada-drenched performances for museum and gallery spaces, Portnoy has retooled it for the stage. Full disclosure: I’ve studied under Portnoy and count him as a friend, but I’ll be the first say that his work is often quite proud of itself. He thinks that it is very clever, and (sometimes to his detriment) it is.

Relational Stalinism—The Musical began with Portnoy sardonically ingratiating himself to different demographics of the audience—theater aficionados, contemporary art enthusiasts, institutional curators—by alternately speaking directly to each group about how only they had the capacity to truly appreciate what was to come. He then presented eight movements, following a structure that recalled a sketch comedy show. He made an unscripted prank phone call to Chase Bank customer service that demonstrated his acrobatic abilities with language and scene setting. Performer Kenya Nara, in a seductively offensive bit called “An(al) Lee(k),” played the role of a robotlike Japanese actor hired by Tino Sehgal and then caustically discarded for asking museum visitors thoughtful questions that transcended Sehgal’s Philosophy 101 prompts. Audience members were invited onstage for an up-close view of an impressive choreography of blinking that Portnoy and company performed to a composition for taiko drum in mind-bendingly odd time signatures. Most rewarding were 100 Big Entrances parts one and two, in which Portnoy, seated at a music stand and relishing his role as Relational Stalinist, directed performers Chris Bráz and Sean Donovan through a series of increasingly ridiculous stage entrance directives. One example: “Enter with a mixture of shame that you did it, shame that you didn’t do it better, and shame that you’ll never be able to do it again.” Both Bráz and Donovan were striking. They emerged from behind the curtain and channeled slapstick and rubber-faced reactions worthy of Jim Carrey.

Despite his penchant for alienating audiences and ridiculing their elevated tastes to their faces, Portnoy, as a devotee of comedy, ironically depends a great deal on ingratiating himself to them. He’s addicted to getting laughs. At the performance I attended, the audience was happy to oblige. There’s a participatory power in being an audience member in situations like these; if we’re reluctant to let ourselves get infected by the first wave of chuckles, the air will quickly get sucked from the room. Medlyn also likes his audiences to take themselves less seriously, but the introspection and dance-world in-jokes of I <3 Pina made it hard to loosen up. While Portnoy similarly relies on knowledge of the ins and outs of institutional frameworks, Relational Stalinism—The Musical had a buoyancy that made the work feel accessible. Audiences respond to that. He worked hard to please us, and was confident enough in the work’s comedy that he didn’t need to shield it with cleverness. Meanwhile, chipaumire exudes a self-assured excellence of an entirely different, confrontational kind. She goes after institutions on a much bigger scale. The way she accosts the audience is a microcosmic attack on structural racism. And she does it with a masterful precision and presence that changed the way I understood everything else at American Realness. There’s a song called “Drugs Are Good” by punk band NOFX that goes: “Join a punk band. Shave your head and get a tattoo. You don’t need talent, just sing attitude.” I thought that sentiment sounded pretty badass in high school. Compared to chipaumire, it now sounds painfully mediocre.