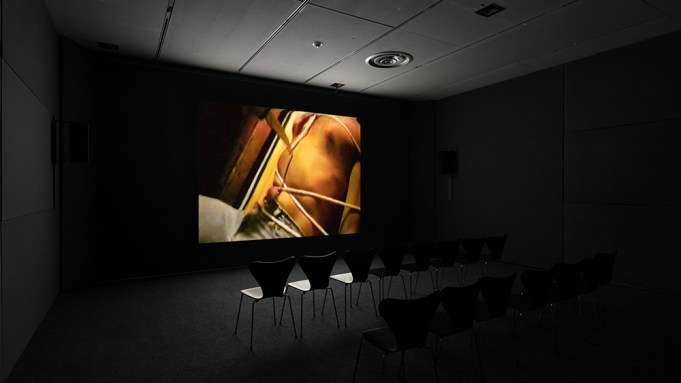 Gary Indiana’s 1985 dismissal of video art as tending to be “as beautiful as Xerox” kept coming to mind as I watched Vaginal Davis’s 1999 video The White to Be Angry, which was recently on view at the Art Institute of Chicago. Davis’s video feels like the xeroxed queer zines of the early ’90s: alternately caustic and irreverent, disorderly, beautiful in spirit if not in style.

For those familiar with Davis’s performances in the queer and punk clubs of LA in the late 1970s and ’80s, her presence in a major American art museum may be surprising. She has made a career of skewering institutions of all kinds, and calls herself a “societal threat.” But Davis’s growing recognition today makes sense. In a political moment riven by dogmatism, her work subverting categories of race and gender is freshly urgent. The flamboyant artist (who, one imagines, might be given to embellishment) has said that she was born intersex to a forty-five-year-old Creole-Choctaw mother and a twenty-one-year-old Mexican-American Jewish father who had a one-night stand under a table at a Ray Charles concert at the Hollywood Palladium. She named herself after Angela Davis. Since the 1970s, identity has been at the core of her videos, zines, performances, and visual art. She offers pointed, often parodic takedowns of conservatism and white supremacy.

In 2022, Art Workers Continued to Unionize and Strike for Their Rights

For all its charisma, The White to Be Angry is a ham-fisted vehicle for Davis’s talents. In 1998, her speed metal band Pedro, Muriel, and Esther (PME) released an album, also titled The White to Be Angry, and the nineteen-minute video feels more like a companion piece than like a cohesive statement of its own. Indeed, the curators described the video as a “visual album,” perhaps because PME songs play over each section. At the end of one scene, Davis even spray-paints “PME” on a bedsheet, underscoring the video’s connection to her band.

The video is a collage of original vignettes and appropriated broadcast footage, with a frame narrative concerning a young skinhead in LA troubled by his secret queer desires. In the opening scene, his mother chows Doritos while spewing racist diatribes. Confederate flags and swastikas crowd the walls around them. We see a newspaper on a table featuring Oklahoma City bomber Timothy McVeigh’s face. In subsequent scenes, Davis’s skinhead assaults a gay man (portrayed as a campy coquette) whom he passes on the street and invites back home. At the end, he picks up a fellow skinhead at a leather bar and the two watch TV, tense with barely controlled homoeroticism.

Between the sequences of this narrative, Davis creates the effect of channel-surfing. There are snippets of televangelist programs, soap operas, “America’s Most Wanted,” and the sitcom “Moesha,” among other shows. There are also three longer interludes presented as the films of notable directors. The first, titled Riche Jewish Husband, is a spoof on Woody Allen that includes a part in which actors dance to a punk rendition of “Hava Nagila.” The second, Homosexual Is Criminal, is attributed to the gay horror writer Clive Barker and follows a pair of thrill killers as they torture and murder their way across LA. The third, Beggars of Life, is a more carefree valentine to Davis’s friends, and is credited to the gay filmmaker Bruce LaBruce. These sections are occasionally amusing but don’t add up to much.

From the outset, Davis’s caricature of right-wing extremism undermines the video’s potential to take genuine risks. When overripe satire is the default mode, critique becomes entertainment, and reinforces the status quo Davis ostensibly rejects. In The White to Be Angry, the disconnected films-within-the-film and detritus of ’90s mass media produce a dissonant mood that matches the soundtrack. Davis’s lampooning of hypocritical bigots feels tacked-on, however, and has all the subtlety of a Nazi salute. The themes of The White to Be Angry are always relevant, but their execution here is muddled. Davis’s video is as beautiful as a xerox, but not nearly as clear.