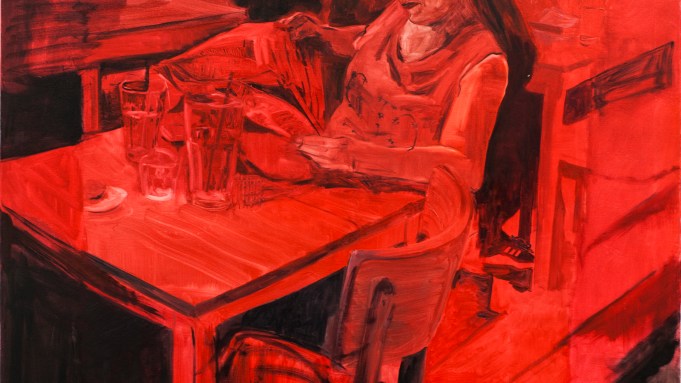 For the past several years, Valentina Liernur’s primary points of reference have been the global fashion industry and the local vernacular of her native Buenos Aires. Her exhibitions have, for instance, featured furiously scribbled black Sharpie drawings copied from fashion ads and canvases covered in bleached, ripped, and safety-pinned denim, and been accompanied by press releases quoting lyrics to songs by the Buenos Aires rolinga (Rolling Stones–influenced) band Ratones Paranoicos or poems by Buenos Aires artist-poet Fernanda Laguna. In “Scarlata,” her recent show at Ruth Benzacar (all works 2019), she offered a series of paintings that is as fluent in the visual codes of international style as it is rooted in the atmosphere of Argentina’s capital.

Fifteen large paintings rendered in various shades of red lined the walls of the gallery. Most were portraits of women—fashion models, a comic book heroine, children, café dwellers, women waiting for the subway, and Liernur herself—in settings around Buenos Aires. The intense color palettes—burgundy, magenta, cherry, maroon—and frenetic brushwork give the portraits a forcefulness that contrasts with their subject matter, the resulting works conveying both banality and urgency. Interspersed among the portraits were hazy abstract monochromes sliced with zippers, suggesting the slashed canvases of Lucio Fontana filtered through fashion.

Drawing on both appropriated imagery and Liernur’s own photographs of women she encountered around the city, the paintings represent their subjects as the assured protagonists of their own narratives. A number of the works, such as Cortado and Un Tostado y Una Coca (A Tostado and a Coke), depict self-possessed older women alone in urban settings. Neither Botox-filled youth-chasers nor sad old maids, they convey innate, confident coolness, evoking Joan Didion in Juergen Teller’s portrait for Céline’s spring/summer 2015 ad campaign. In Selfie con Carrito (Selfie with Stroller), Liernur depicts herself as a young, on-the-go parent taking a few seconds off to snap a selfie in an elevator mirror. The work is equal parts self-aggrandizing and vulnerable, as Liernur exaggerates her casually narcissistic gesture by immortalizing it in oil.

Alongside these quotidian scenes were several paintings taking up more fantastical subjects. In Las Amigas in Puerto Madero (Girlfriends in Puerto Madero), two women with the same severe facial features recline in an urban landscape with a fiery orange sky. The composition is more than loosely based on a 2015 Balmain ad in which Kendall and Kylie Jenner, styled almost identically, stare seductively into each other’s eyes, with Kylie pushing her sister’s chest as if trying to force her down. In the gallery, a black leatherette couch was placed beneath this painting of an ad using taboo eroticism to sell luxury goods, while a matching pair of club chairs sat on the other side of the room. The inclusion of furniture seemed like a tongue-in-cheek comment on Liernur’s own implication in systems of branding and consumption, as if demonstrating to collectors the suitability of her painting in a living room.

Liernur hints at an alter ego in Valentina, which depicts a ravaged woman against a hellish backdrop, her arms extended defiantly upward as menacing ravens fly around her. The image is drawn from Guido Crepax’s comic book “Valentina” (1965–96), a frequent source of inspiration for Liernur, who was named after its protagonist, a time-traveling photographer. An action hero and a sexpot, the Valentina of the comics is a conventional caricature of powerful femininity: aspirational, but reductive. Liernur paints her as a survivor emerging from apocalyptic ashes, arguably giving her more credit than Crepax ever did. Liernur’s protagonists navigate a world in which women are subjected to impossible standards and fixed roles, but nevertheless find a way to assert a sense of agency over their lives.