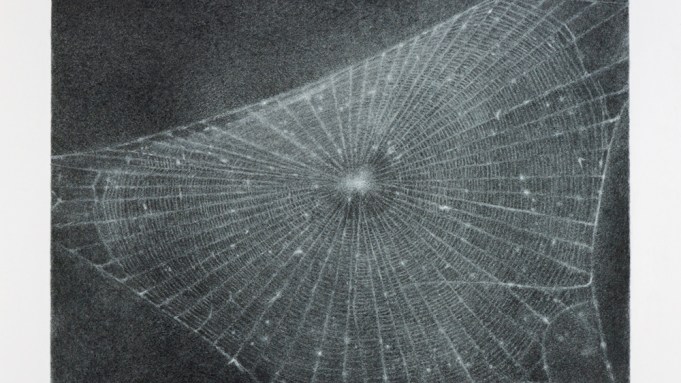 THE VIJA CELMINS RETROSPECTIVE at the San Francisco Museum of Modern Art, “To Fix the Image in Memory,” does not begin with her celebrated drawings of the ocean or the night sky, as one might expect, but with an unassuming oil painting of an envelope. Hung just outside the first gallery, Envelope (1964) portrays its subject through a subtle interplay of lush, luminous surfaces, attesting to Celmins’s considerable technical skill. The painting carries a hint of violence and is tense with expectation—the envelope has been ripped open, but the contents withheld.

To start the show with this work was a deft decision by curators Gary Garrels, from SFMoMA, and Ian Alteveer, from the Metropolitan Museum of Art. (The exhibition will travel to the Met Breuer in the fall.) It demonstrates their sensitivity to the singular oeuvre of this reticent artist, who was born in Latvia and has developed her practice over the past half-century, first working in Los Angeles and then, beginning in the early 1980s, in New York. Although the exhibition is laid out in chronological fashion, motifs recur throughout, given Celmins’s steady focus on the same themes throughout her career. In Letter (1968) we find another envelope, this one exquisitely rendered in graphite on prepared paper. The envelope was for a letter Celmins’s mother sent to her at her studio, and the artist kept it for two years. “I thought of these images that I worked with as something dead that I was looking at,” she said in a 2011 interview. “So I brought them alive by redescribing them.” While Celmins depicts the envelope in Letter accurately, noting every crease in the paper, the stamps are her own drawings of bombs, clouds, and houses—subjects familiar from her earlier work. The drawing thus exemplifies her keen attention to different modes of description, her interest in repetition, and the tension between veracity and illusion that permeates her best work.

Celmins is a famously slow artist, prone to fallow periods, and the 140 pieces on view constitute nearly half of her body of work. The exhibition is weighted toward her drawing, painting, and sculpture, and contains only a small sampling of prints, which is unfortunate, given her dexterity with numerous printmaking techniques. The nuanced presentation of her practice across various mediums distinguishes the retrospective from previous surveys of her work in the United States, such as a 2002 exhibition of her prints at the Metropolitan, and a show of her drawings that in 2007 traveled from the Centre Pompidou in Paris to the Hammer Museum in Los Angeles, where Garrels was the organizing curator. He began working on the current exhibition two years later.

The most successful galleries in “To Fix the Image in Memory” chart the artist’s movement between materials. The first space, for instance, exhibits portrayals of everyday objects in two- and three-dimensional mediums alongside one another, placing the oil paintings Fan and Heater (both 1964) near oversize painted-wood sculptures of a comb, three Pink Pearl erasers, and a pencil. Elsewhere, a heavily worked oil-and-wax image of the night sky, Barrier (1985–86), is displayed beside the softly rendered graphite Drawing Saturn (1982), as well as a suite of four prints, Concentric Bearings (1984), in which Celmins juxtaposes depictions of her motifs in varying combinations of aquatint, drypoint, mezzotint, and photogravure. The revelation of this exhibition is not how staggeringly beautiful Celmins’s work is—we already knew that—but how fluidly she moves between mediums, with each shift answering an aesthetic problem. When Celmins felt that her painting was becoming too concentrated and tight, for example, she began using charcoal to try to “trick” herself into making “work that was a little more open,” as she explained in an interview in the catalogue for the 2002 Met show. The outcomes of this decision are seen in the night sky series, as well as her drawings of spiderwebs.

Celmins has long been known as an artist’s artist, and so it was no surprise to find visitors looking closely at her works’ tacking edges or trying to discern the nature of the acrylic grounds (sprayed? brushed?) she uses for some of her drawings. The lack of a technical essay in the excellent exhibition catalogue is a missed opportunity. The catalogue contains a useful chronology and essays about her time in Los Angeles and New York, though more needs to be done to contextualize this artist’s work in the currents of postwar art. While she is continually out of step with artistic movements, as Garrels notes, she is attuned to her place in history. She described her first show—held at David Stuart Galleries in Los Angeles in 1966, and featuring, among other works, paintings of historical news images—as “bringing WWII to the middle of LA when everybody else was looking at Duchamp and Warhol.” She dismissed the soup can paintings Warhol exhibited at Ferus Gallery in 1962 as too commercial, but her eraser sculptures are unmistakably Pop and suggest kinships with Claes Oldenburg’s work. Warhol haunts Celmins’s depictions of car crashes, and Celmins once observed that she and Gerhard Richter “must have found the same World War II books,” given their shared imagery. Russell Ferguson’s essay in the catalogue begins to unpack the impact of Robert Irwin’s phenomenological approach on Celmins’s practice, but more could be said about the perceptual effects of her oceans in relation to the work of her peers in Venice, such as James Turrell and Doug Wheeler.

Throughout the exhibition, Celmins’s work builds upon itself, recalling the centripetal forces of her motifs: “the plane spiraling down, the rotary device spinning, the stars turning,” as she put it in the 2002 interview. There’s also the perpetual feeling of violence. Table with Gun (2009–10) comprises a wooden desk (built by Celmins) with a blackboard tablet and gun placed on top and three more blackboard tablets resting on an interior shelf. Three of the blackboards are found objects and one is a replica, prompting viewers to try to determine the fake. The pistol is a bronze cast of the gun depicted in the paintings Gun with Hand #1 and Gun with Hand #2 (both 1964), which Celmins based on a photograph she’d taken of a model holding the weapon. The three-dimensionality of Table with Gun obviates the studied remove of the earlier paintings, creating a chilling sense of impending danger.

Celmins rarely leaves her viewers on solid ground. Rather, they must constantly negotiate the paradoxical sense of familiarity and reserve that animates her work. The artist is acutely aware of these qualities, as she made clear when discussing an experience she had in the desert, a setting that figured prominently in her work from the 1970s. “At first I thought there was nothing there,” she said. “Then I began to see things. I was always having to adjust my eyes back and forth—both far and close, which is how I think about my own work sometimes. It lies somewhere between distance and intimacy.”