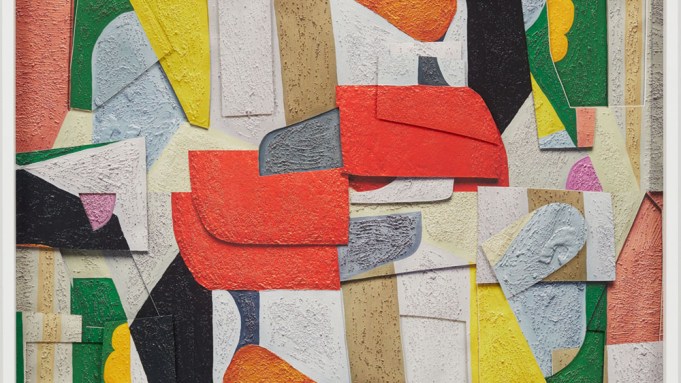 Sikkema Jenkins & Co.’s recent Vik Muniz exhibition featured works from two stunning new series: “Surfaces” (2019), composed of large-scale photo-based works that resemble paintings, and “Museum of Ashes” (2019–), comprising photographs and sculptures. On view in the foyer and main space were fifteen pieces from the former group. Muniz pays homage here to abstract or quasi-abstract paintings from the early and mid-twentieth century, mostly by United States and Latin American artists. The series has a rather personal significance for him. The artist, who divides his time between New York and Rio de Janeiro, was born in São Paulo in 1961, and in his youth came to know modern art only through reproductions in books. In “Surfaces,” he depicts paintings that inspired him during this early era, by artists such as Stuart Davis, Hans Hofmann, Milton Avery, and Carmen Herrera.

From a distance, the works look like painted copies of the original compositions. But close up, they prove to be relief constructions made of cut photographs. Muniz made his own painted versions of the source works—in most cases, trying to make a convincing replica. He then photographed the paintings, and cut up prints of the photos and layered the pieces to produce the final constructions. Unlike the editioned photos in his previous series—the best known of which depict meticulous reconstructions of paintings by artists including Manet, Van Gogh, and Mondrian made using of bits of paper and other unexpected materials—the “Surfaces” are unique and sculptural. Pierrot, after Willys de Castro, one of the most striking examples shown here, portrays a 1953 painting by de Castro, the Brazilian artist, poet, and cofounder of the Neo-Concrete movement, who died in 1988. Muniz’s imposing relief, like the original composition, brings together luminous blue curving forms and triangular shapes in a configuration that resembles a large head.

Works from “Museum of Ashes” were displayed in two back galleries. In this series, Muniz takes up a timely, emotionally wrought subject, portraying art objects and artifacts that were destroyed in a September 2018 fire at the National Museum of Brazil, in Rio de Janeiro. Most of the museum’s holdings were lost in the blaze, including Egyptian, pre-Columbian, and Indigenous Brazilian items. Soon after the fire, Muniz proposed to the museum, which had been a longtime favorite of his, a project to work with the institution’s archivists to reimagine some of the lost objects.

For some works in the series, Muniz makes two-dimensional depictions of objects using their ash remains as a kind of drawing medium, and then photographs the resultant compositions. The exhibition featured eleven of the photographs, including ones portraying an ancient Egyptian sarcophagus and a fragment of a Pompeian fresco. The series also includes sculptures—black 3D prints of objects that he produces using a mix of ash from the objects’ burned display sites and polymer. The three sculptures on view  here re-created a figurine depicting the Egyptian high priest Amun Menkheperre, a cat mummy, and an 11,500-year-old human skull—the oldest ever found in the Americas, and widely regarded as one of the museum’s greatest losses.

“Museum of Ashes” recalls a photo series that Muniz showed at the Whitney Museum of American Art in 2001, “The Things Themselves: Pictures of Dust.” For that series, Muniz made painstaking drawings of installation shots of Minimalist and Post-Minimalist works at the Whitney (including seminal pieces by Richard Serra, Donald Judd, and Barry Le Va) using dust collected from the museum’s vacuum cleaners. As such earlier endeavors show, Muniz has long mined art from the past to conceive something new. In “Surfaces” and “Museum of Ashes,” however, he takes a personal turn, adding an affecting layer to his conceptual practice.