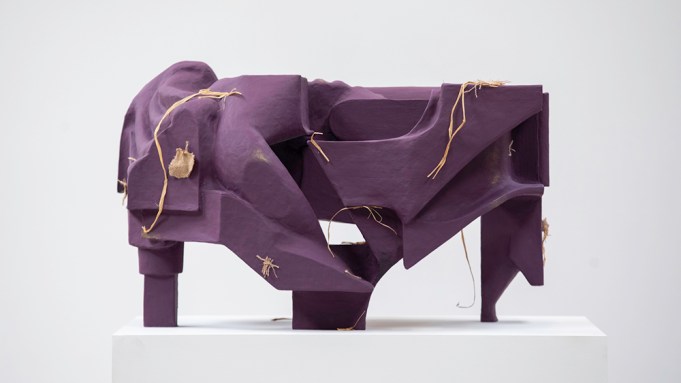 Three prints of a photograph showing San Francisco–based artist Vincent Fecteau standing on the hood of a totaled car currently wallpaper the Wattis Institute’s street-facing windows. He stares coolly at his feet, his calm presence incongruous with the wreck below. The Wattis exhibition is Fecteau’s first on his home turf since 2002, though he’s been plenty busy since then, showing his work extensively in Los Angeles, New York, and elsewhere and receiving a MacArthur Fellowship. Dispassionate and slightly morbid, the image is an appropriate introduction to a homecoming presentation of work that revels in indeterminacy and turns over the question of what does or doesn’t remain of something: the shape of a work in progress, a place, a friendship.

The seven untitled sculptures on view are, like all of Fecteau’s work, riddles without solutions. These acrylic-painted amalgams of foam, papier-mâché, and resin clay are placed on evenly spaced pedestals at eye level, so that viewers can take in their curious assortments of curves, squared-off corners, and cavities. Fecteau made the works iteratively: he would reevaluate the results of one piece, and then use the same materials and general shape as the basis for the next one, each “completed” sculpture but another resting point in the process. The works are roughly the same size—around twenty to thirty inches per side—and of indeterminate weight, given their smoothly painted surfaces.

From certain angles, the sculptures suggest architectural models. From others, they take on a biomorphic cast. The works’ strangeness comes into relief when they’re viewed up close, a vantage that also best shows off Fecteau’s irrepressible penchant for the statement accessory. One sculpture, painted a Prince-worthy shade of purple, bears strands of raffia and burlap patches, as if it has just enjoyed a hayloft tryst. Another, painted in a mottled peacock blue, is topped with two screw eye hooks that have all the attitude of a teenager’s eyebrow ring. Tucked into a hollow of still another is a black jute bow that could have been lifted straight from a Sunday church hat. Fecteau has said that the sculptures are “about” the Wizard of Oz. The works, with their contoured planes, might suggest Dorothy’s house whirling in the twister, and the raffia recalls the Scarecrow’s costume. More than just camp garnish, however, Fecteau’s found-scrap embellishments have a curious effect on the sculptures, making them at once more and less alien, like when ET appears disguised in drag.

Just as unexpected as those adornments are the four blown-up re-photographed photographs by the late Lutz Bacher that hang on the walls. These aren’t listed on the show’s checklist or mentioned in the press release, nor is the aforementioned installation of photographic prints on the Wattis windows, which was also by Bacher. The images in the gallery, suggesting outtakes from a portrait session or stills from a “Candid Camera” bit, form a sequence in which a little girl, facing the camera, goes from diffident to shocked as the chair she sits on collapses. In the catalogue, the show’s curator, Anthony Huberman, notes that Fecteau sent Bacher the original photographs, as he would do whenever he encountered an image that possessed a certain quality he thought she would appreciate. As you view Fecteau’s sculptures in the exhibition, the girl is always in your line of sight, gazing out and generating a kind of self-consciousness about your own looking.

The inclusion of Bacher’s work provides a glimpse into the creative impulses that animated their relationship. Seeing their works installed together highlights how much the two artists’ sensibilities overlapped, even if their practices diverged significantly. Both artists’ work contains a puckish sense of humor roiling beneath apparently inscrutable surfaces. Both feature ordinary materials in canny and unexpected ways. And both tug, gently, incessantly, at the structures that support a coherent understanding of the world, until the only way to reapproach “home” is as Dorothy or ET or the little girl in the photographs does: through a crash-landing in which the everyday is rendered unfamiliar, strange.

An earlier version of the review gave incorrect information about the photograph displayed on the Wattis Institute’s windows. It was taken in 2007 or 2008 and not during a 1990 ACT UP demonstration. The opening paragraph has been adjusted.

The review also implied that Fecteau decided to include Lutz Bacher’s work in the exhibition after her death. Bacher collaborated with him on the show before her death. Wording concerning her work here has been revised.

Fecteau did not have The Wizard of Oz playing in his studio as he made the sculptures, as the review had suggested, but, rather, realized that the sculptures related to the movie after he had made them.

This article appears under the title “Vincent Fecteau” in the November 2019 issue, p. 106.