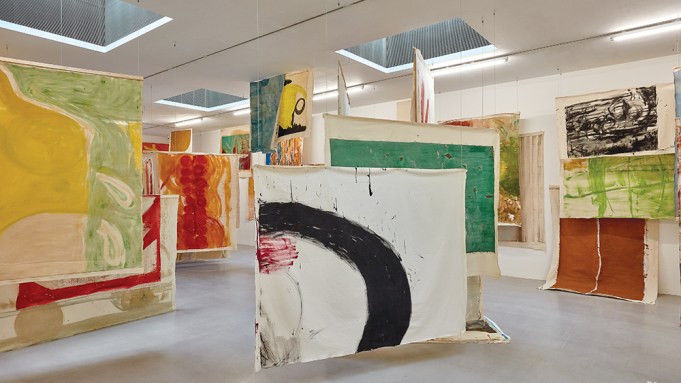 In 1982, seeking refuge from the pressures of early art-world success, the Swiss-Argentine artist Vivian Suter moved to Panajachel, Guatemala, a remote village situated on the edge of a volcanic lake ringed by mountains. In the four decades since, she has exhibited only sporadically, though her vibrant abstract paintings have attracted increased attention in the past several years. As is vividly illustrated in Rosalind Nashashibi’s 2017 film Vivian’s Garden, an intimate study of the precarious Eden where Suter and her mother, the artist Elisabeth Wild, live with their three dogs, Suter paints in her tropical garden, leaving her canvases exposed to the elements outdoors (Elisabeth Wild died at home in early February; she was 98). She adopted this practice after her studio was devastated by a hurricane in 2005, the event leading her to embrace nature’s vagaries rather than try to resist them. Suter conjures this environment in her immersive exhibitions by hanging her large-scale unprimed canvases in a manner suggestive of the haphazard crowding of dense vegetation: at odd angles, partly obscured, chopping up the space, close to the ceiling, and sprawling in piles across the floor.

'The Wind, the Rain, the Volcanoes': Vivian Suter Gives Nature Free Rein in a Seductive Show at the Jewish Museum

Suter’s exhibition at Camden Arts Centre—titled “Tintin’s Sofa,” in reference to one of her dogs—invites visitors to navigate their own meandering paths through a profusion of swirling colors and organic forms. Around two hundred unstretched canvases are displayed across two rooms and part of a hallway, each turn unfolding new perspectives. The artist created an additional installation for the garden: she constructed a wooden lean-to with open sides in which eight canvases hang from racks in back-to-back pairs, exposed to the winter London weather. Uprooted from the wilderness where Suter created them to this small urban garden outside the gallery’s glass-fronted café, the works look forlorn and abandoned.

In the brightly lit galleries, however, a similar hanging arrangement is more effective, with paintings closely suspended from a rack so they can be only partially glimpsed, sidelong, as flashes of color. Suter’s canvases exert a powerful sensory impact that is heightened by their unconventional, almost chaotic presentation: displayed in overlapping clusters and lacking titles and dates, the paintings are experienced collectively, each one inseparable from the others. Her free approach is further evidenced in her varied handling of paint, which at times recalls the nebulous pastel washes of Helen Frankenthaler and the tangled brushwork of Joan Mitchell, incorporating gestural brushstrokes, drips, spatters, biomorphic blobs, geometric blocks, and thinly applied swaths of peach, teal, and fuchsia. The overall impression is one of physical energy conveyed in rapid, loose sweeps of pigment across the canvas.

Suter’s paintings capture the kaleidoscope of changing light in her jungle garden: gray blocks on green evoking dappled sunshine streaming through leaves, diffused mauve outlines suggesting twilight or the darkening sky before a storm. Sometimes figurative elements creep in, such as a palm frond or a window grid silhouetted against ocher. Vertical curving shapes resemble shadows of humans flitting around within the encroaching foliage. Left visible on the surfaces of the canvases, which are often creased and curling at the edges, are traces of nature: animal paw prints mingle with insect trails, rain, twigs, and dirt. These random markings are in fact integral to Suter’s approach, injecting the works with decorative texture and vitality, while offering a stark reminder of the fragility of existence in her volatile environment.