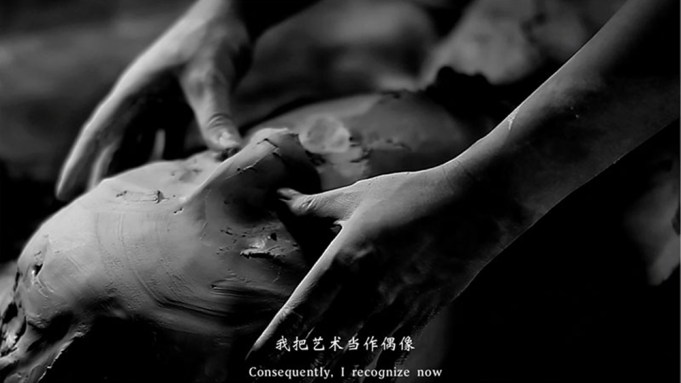 The undisputed star of the 2018 Biennale of Sydney is Chinese artist and provocateur Ai Weiwei. He has dominated media coverage of the Biennale with his outsize persona—a phenomenon that reflects his prominent presence in the public programming and the pride of place that artistic director Mami Kataoka has given his work in the exhibition. Ai’s contributions include Law of the Journey (2018), a monumental two-hundred-foot-long inflatable rubber sculpture representing a raft filled with three hundred huddled asylum seekers. It is one of several refugee-themed works by the artist on view. The Biennale also presented the premiere of Human Flow (2018), his two-and-a-half-hour documentary on the worldwide refugee crisis. The screening followed a much-publicized keynote event billed as a wide-ranging discussion of Ai’s work and concerns.

To place Ai at the show’s center was a gesture of protest against the Australian government’s mandatory detention of asylum seekers. Controversy concerning this policy has loomed over the Biennale since 2014, when nine invited artists initiated a boycott of Transfield Holdings, the founding funder of the Biennale, due to the company’s role in providing services to the refugee detention center on Manus Island. Transfield’s withdrawal provided a moral victory for the protesters but has left a financial hole that the Biennale is still struggling to fill. As a result, this year’s edition, with sixty-nine artists, is noticeably smaller than previous ones, and, in a departure from tradition, it has no catalogue.

Despite these difficulties, the show has gone on. Kataoka, chief curator of the Mori Art Museum in Tokyo and the first Asian artistic director of the Biennale (whose inaugural edition was in 1973), chose the title “Superposition: Equilibrium & Engagement.” It refers to both quantum mechanics and Taoist philosophy and is meant, as she notes in the Biennale’s publicity materials, to suggest overlapping states of conflict and attempted resolution. In addition to Ai’s contributions, there are several other pointed political works that focus on global tension, including Tiffany Chung’s “Vietnam Exodus Project” (2016), in which the artist uses maps, paintings, and videos to explore the displacement of refugees from her native country following the debacle of the Vietnam War.

However, such works aside, politics are not really the focus of the exhibition. Instead, the deliberately vague title provides cover for the embrace of multiple positions and diverse artworks that has become standard curatorial practice. Participatory works are well represented. A video installation by Suzanne Lacy documents her two-year project that used music to build camaraderie among members of a deindustrialized community in Northern England. Canadian artist Ciara Phillips has transformed a gallery in Sydney’s Museum of Contemporary Art into a print studio for the local community. Painting is also given its due; the Art Gallery of New South Wales is hosting an interesting mini-exhibition exploring the history of abstraction in Australia and elsewhere using works from its collection.

Given the squishiness of the theme, the show doesn’t forge strong connections among the works, thus leading viewers to contemplate the pieces individually.  These offer moments of beauty, surprise, and quiet pleasure. One of the most spectacular works is Japanese artist Yukinori Yanagi’s Icarus Cell (2018), a sprawling labyrinth made of shipping containers outfitted with reflective glass walls that confuse, double, and distort spaces. The brochure that substitutes for a catalogue describes the work as a representation of capitalism and global networks, though most viewers will enjoy it as an entertaining funhouse attraction.

On Cockatoo Island, formerly the site of a prison and shipbuilding factory, British artist Ryan Gander has created an installation inspired by childhood recollections of snow settling on the streets of the Northwest England community where he grew up. Other Places (2018) is a room where dunes of salt have settled around a street sign, a tombstone, and half-obscured objects. Viewers can’t enter the room, but they can view it through windows and watch a live feed from a camera zooming in on specific details. The work combines the serenity of a Zen garden with the inaccessibility of another person’s private memories.

Equally lyrical is The Poetry of Michelangelo (2015) by Chinese artist Geng Xue.  This meditative video follows the artist as she lovingly sculpts a life-size male figure, her hands turning blobs of wet clay into pliable flesh. It is arrestingly intimate. When the figure is finished, Geng manipulates the mouth and blows into it, as if giving it life. After this, in preparation for casting, she slices the figure into pieces, thus acting as both creator and destroyer.

Breath also figured in British artist Oliver Beer’s performance, Composition for Tuning an Architectural Space (2018). During a residency at the Sydney Opera House, Beer continued his project of turning architectural spaces into soundscapes. He created a score using the notes that resonate when sung at certain parts of a utility stairwell in the opera house. Four singers performed the score live while standing on the stairs, producing an eerie cocoon of sound around the small groups of visitors who had gathered to experience the work.

“Superposition” includes a gallery devoted to the Biennale’s archives. Photos, news clips, curatorial statements, catalogues, and other materials show how the exhibition’s curators have taken eclectic approaches over the decades, careening between internationalism and local themes. Ironically, the presentation of the archive makes the absence of a catalogue this year seem even more unfortunate.

The much-hyped keynote conversation between Ai and Kataoka was also unfortunate. Presented as the culmination of the preview week, the sold-out event was held in the opera house’s cavernous auditorium. Expectations were high, given the hot-button issue of refugee status in Australia and the long association between curator and artist (Kataoka curated Ai’s internationally touring show “Ai Weiwei: According to What”). But the two seemed unable to connect and Ai was reduced to counting the minutes remaining on the clock aloud as the discussion wound down to a dispiriting end. The talk underscored a basic disconnect between the festival atmosphere that surrounds these international extravaganzas and the serious issues they attempt to illuminate. The plight of refugees became little more than another spectacle to be consumed by the roving art audience.