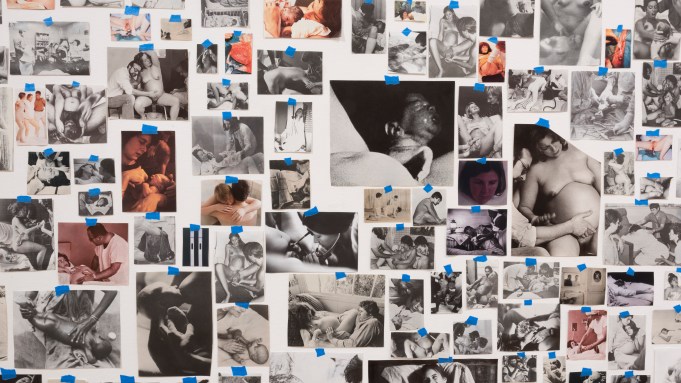 It has been two years since the last edition of the Museum of Modern Art’s New Photography series. The current one is on view through August 19. Titled “Being,” it asks: “How can photography capture what it means to be human?” With a camera, probably. But the real focus of the show is representation: how people represent themselves with and against the images preselected for them by media and society; how photography is and isn’t a representation of life; how certain photographic processes can function as metaphors for selfhood. Seventeen artists from around the world were selected by curator Lucy Gallun to highlight the pliability of photography’s answers to these questions.

The first image visitors see is a portrait by Aida Muluneh that hangs alone on a wall painted bright yellow. All in One (2016) seems like an image of a single person at first glance, but after a few moments you see a second pair of hands emerging from behind. The subject’s skin is covered with white makeup, but the extra hands are painted in red. In The Departure (2016), another photo by Muluneh, the image is edited so that the same figure appears simultaneously in two windows of what looks like either a train or bus. The figure on the left makes direct eye contact with the viewer and raises a palm outward. The other is seen in profile, looking forward.

Muluneh’s work reminds us that our identity consists of many different iterations of ourselves. She was born in Ethiopia and went to school abroad at a very young age; she has lived and worked in several cities around the world, but now lives in her native country. Government and cultural institutions will always try to typify and pigeonhole someone’s identify (white, black, Asian, other) for legal reasons, or simply for the ease of categorization. Individuals follow suit. Appearance can immediately trigger clichés in people’s minds. The truth is much more complicated.

Paul Mpagi Sepuya deals with fragmented identities and the overall messiness of not only portraiture but also existence. Some of Sepuya’s works, such as Untitled (2017) or Mirror Study (4R2A0857), 2016, read as collages where pieces of the photographic process are laid over each other. What may have begun as a typical nude portrait of a model becomes everything but; all traces of the behind-the-scenes work are on the surface, as Sepuya literally tacks outtakes and references onto the image. The artist’s approach produces pictures that look like both a working mood board and a tightly organized illusion that keeps the viewer from identifying the location of the camera or subject because the focus of attention bounces around among mirrors, holes in sheets, and cropped limbs. Sepuya is a black gay man, and his work evokes the common gay experience of hiding one’s impulses. He employs the tropes of nude portraiture, but instead of offering the subject to a consuming gaze, he lays out what goes into the making of a photograph, who is looking at it, and who is creating it.

One of the highlights of “Being” is a work by Carmen Winant titled My Birth (2018). In a short hallway between galleries, Winant has posted over two thousand small found images of women preparing for or in the process of childbirth. The installation feels almost like a womb. The images are roughly the same size (smaller than a four-by-six-inch print), and hung with hand-torn, irregularly shaped bits of blue painter’s tape. The scale of the work makes it immediately impressive, but when you get close and notice the subject of the images it becomes even more incredible. You realize that these photographs, which Winant found in magazines and informational literature depicting women giving birth, are almost entirely hidden from public view. Even in our image-obsessed culture, images of this event that all of us have experienced are rarely seen. Another unsettling revelation comes with extended viewing: the women included in Winant’s installation are predominantly white. Winant could only find a handful of women of color in her research materials, reflecting the biases of those who controlled these publications when it came to imagining the ideal mother.

Matthew Connors takes a more straightforward approach, working in the familiar tradition of street photography. His observations and meditations on everyday life in North Korea were recorded on multiple trips to the country from 2013 to 2016. He behaves like a fly on the wall, not disrupting or altering anything that goes on around him. North Korea is notorious for its overbearing government that smothers citizens with various restrictions, but Connors captures the subtleties of everyday life there without any judgment or condemnation.

In Kujan (2016) a cave is shown with its red and green lighting, meant to make an ancient and beautiful natural occurrence more alluring to tourists. In Chongsan (2016) a man is shown embracing another man from behind on the edge of a large pool. Their relationship is mysterious; it could be either platonic or sexual. In Mask in Reverse (2016) a man’s hand is holding up a flat paper mask, which we only see from behind. The identity remains hidden. A stick is crudely taped to the back and the elastic band meant to wrap around the wearer’s head is tangled up and rendered useless by the stick. Something simple has become crude and complicated. The image seems like it could an allegory for the overall theme of “Being”: the process of representing oneself when social constructions of race, class, and gender dictate one’s experience.

New Movies to Stream in February 2023

Marilyn Manson Sued for Sexual Assault of a Minor