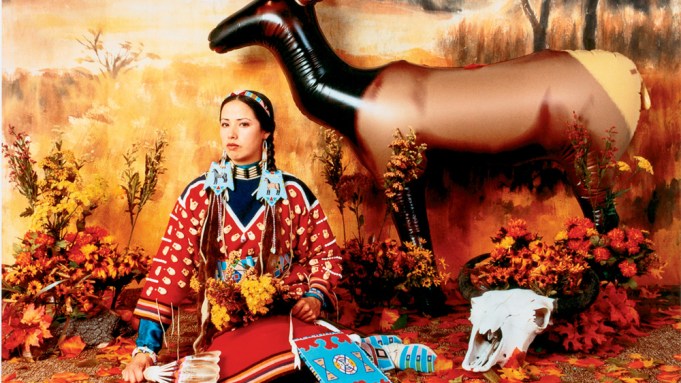 The title of Wendy Red Star’s midcareer survey, “A Scratch on the Earth,” comes from the Apsáalooke (Crow) word annúkaxua, which refers to the “scratches” the United States government made on the land when devising the borders of the Indigenous reservation system in the late eighteenth and early nineteenth centuries. Red Star takes up such territorial mark-making in the wall-size installation that opens the show, Map of the Allotted Lands: Crow Reservation, Montana—A Tribute to Many Good Women (2019). A 1907 map of the Crow Reservation is reproduced in vinyl and overlaid with photo-transparencies of present-day and historic Crow women in elk-tooth dresses and other regalia. The colonial map represents the imposition of a patriarchal property structure that dispossessed the Crow of their land, and Red Star’s photographic repositioning of Crow women on their ancestral land symbolically reestablishes the original matrilineal system.

Portland-based Red Star is best known for her photography, but she also makes sculptures, textiles, and various types of pieces employing archival materials. Among the thirty-plus works on display at the Newark Museum is the series “Four Seasons” (2006), four self-portraits in which the artist poses in traditional Crow dress amid inflatable animals and plastic plants and against backdrops depicting idyllic vistas. These images, with their emphatic artifice, wryly thwart expectations of Native American “authenticity” and skewer the stereotypical, romanticized nature of most commercial images of Native Americans. Similarly, the vibrant colors and patterns seen in Red Star’s “Apsáalooke Feminist” series, in which she and her daughter and frequent collaborator, Beatrice, pose and gaze confidently at the viewer, are assertive, arresting, and modish counterpoints to the soft sepia tones of ethnographic photographer Edward Curtis.

Yet it has become rote to pit Native American photographers in contradistinction to Curtis. Red Star confronts this tendency, if only to let us move on. In Let Them Have Their Voice (2016), she cuts Crow chiefs out of fifteen photos from Curtis’s multivolume North American Indian (1907), leaving only their silhouettes. The work recalls the “vanishing Indian” trope that compelled Curtis to begin his project, while offering the silhouetted sitters as a presence that surpasses their iconic cultural accoutrements. For the series “1880 Crow Peace Delegation” (2014) and “Diplomats of the Crow Nation, 1873 Crow Delegation” (2017), Red Star engaged in a kind of anti-ethnography by writing personal observations and historical details directly onto posed portraits of Crow delegates who had traveled to Washington, D.C., to negotiate the boundaries of tribal land with the US government. Her red ink notations inscribe accomplishments, lineages, and Apsáalooke words around the figures, recasting the photographs as sites of cultural and familial knowledge.

The exhibition’s centerpiece is Sweat Lodge (2019). In this installation, plastic rocks and a path of artificial turf lead to a nearly ten-foot-wide geodesic dome covered in colorful blankets. The fake environment, like those in “Four Seasons,” pokes fun at the type of dioramas found in natural history museums. Clearly, this sweat lodge will offer no real ceremonial experience, but the installation is nonetheless transportive. Projected inside is a 360-degree video, Monsters (2019), that Red Star created with Amelia Winger-Bearskin. The footage shows spectacular panoramas of the Crow Reservation, tracing the scar of an old railway that once cut through the Pryor Mountains in Montana. Red Star moves in and out of view, inscribing a path through her home landscape and then walking off-camera, leaving us with the sound of the wind and the fading scrapes of boots on the rock, the passing experience of making a mark on the earth.

Who Won the Console War? The Ultimate Guide to Buying the Best Gaming Console in 2022